The idea of man-powered flight dates back thousands of years to the story of Icarus and Daedalus, who in ancient myth flew with wings made of feathers and wax.  By 1912, that myth had become a goal every bit as important as flight in the newly developed engine-powered aeroplanes.  Competitions were established on the expectation that it would not be long before man could fly under his own power — thes were the so-called aviettes.  Yet none in that era could truly fly.  Only decades later would a visionary engineer be able to apply modern construction methods and materials to create a man-powered aircraft.  Even that required an extraordinarily long and arduous design process, slowly developing the aircraft until everything was in place for test flights.  The final step was to recruit a cyclist with extraordinary strength and endurance — somehow who could fly the plane into the history books.

Does this sound like the Gossamer Albatros or Condor?  No, this is the story of the Pedaliante, a man-powered aeroplane that flew a distance of more than 1 kilometer in 1937.  Surprised?  So were we.

Prepared for the flight, a front oblique view clearly shows the high aspect ratio wing and dual propellers as well as the tricycle landing gear.

In late 1935, tests undertaken by Italian aeronautical engineer Enea Bossi had proven that with just 0.92 hp, an aeroplane could conceivably fly.  Bossi had been impressed by a 1 hp aeroplane design that he had encountered and, reconsidering man’s inability to fly with aviettes or other man-powered designs, he realized that it might be possible after all.  Clearly, engineering was the key — a light weight, high lift design was required where a man could pedal a bicycle-like apparatus to turn a propeller.  What followed were iterative designs and a carefully built prototype featuring two counter-rotating propellers.  Bossi’s first designs with a single propeller had suffered from adverse torque effects that had resulted in uncontrolled roll.  By adding a second propeller, he solved that problem but equally added more weight. 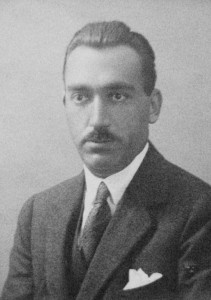 The entire aircraft totaled just 214 pounds; the wings were the heaviest component of the airframe, weighing in at 99 pounds combined.  The Pedaliante was built by Vittorio Bonomi, a glider manufacturer in Italy who had the necessary experience to ensure the lightest and finest construction.  As it happened, the Pedaliante could have been lighter, probably nearly 40 pounds less in overall weight, but instead in order to comply with Italian Air Ministry guidelines, added strength was required to bring the plane up to the same structural integrity as a single-engine aircraft!  The Air Ministry refused to change the rules for the Pedaliante and thus, there was no other option than to proceed with an aircraft that was built heavier than desired.

Nonetheless, tests proved that the Pedaliante could be towed into the air by a man on a bicycle.  This demonstrated that the power was there within a single individual to overcome drag and aerodynamic limitations and truly fly.  The problem was converting the man’s energy produced efficiently into the propellers as thrust. 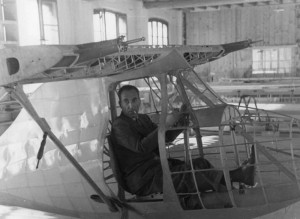 During manufacturing with Bonomi, the quality of the engineering is apparent.

In order to give the design the best possible chance of success, Bossi and Bonomi enlisted an Italian military officer, Major Emilio Casco, who had a particularly stellar physique.  Thin, powerfully built yet not overweight with excessive muscle mass, Casco was the best choice and an expert bicyclist.  In fact, he proved to be uniquely capable on the pedals based on their tests.  Finally, in early 1936, Major Casco took off from the ground and managed to fly a full 91 meters (some dispute this, though others state that he achieved it — he may have been towed to get airborne, which seems likely given that he was flying from a grass field at the time).  The flight was nearly 1/10th of the total distance sought — yet it was also at the very limit of what Major. Casco could achieve using the equivalent of an Olympic quality, short sprint at the pedals.

The biggest challenge was just getting the plane airborne, where, once separated from the friction of rolling on the ground, it could be flown with less effort.  By the time the plane had lifted off, however, Major Casco was nearly exhausted at the pedals.  Nonetheless, he had achieved something that no other man in history had done — flown a reasonable distance under his own power. 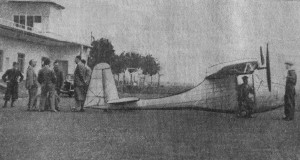 The team assembles beside the Pedaliante. Source: Archivio Enea Bossi

Another method had to be developed to launch the plane.  Thus, Bossi developed a catapult launch that would gently accelerate the Pedaliante forward until it achieved enough speed to fly off the rail.  Launches by this method vaulted the Pedaliante as high as 9 meters without any assistance from the pilot.  At that point, Major Casco would pedal with all he had and then continue ahead until exhausted.  Once aloft, it was hoped that Major Casco still retained enough energy to fly a fairly long distance.  Hopefully, it would be nearly enough to win a prize offering made by the Frankfurt Polytechnische Gesellschaft (Frankfurt Polytechnic Society).  That prize had been further sweetened with the promise of an additional 100,000 lire from the Italian government to any Italian who could make a flight of 1 kilometer.  With the catapult launch from the ground, Major Casco could fly a few hundred meters.  Additional modifications were made to the Pedaliante to increase the propeller diameter and change several features, thereby helping to achieve even more efficient flight.

The Pedaliante in all its glory, c.1937. Source: Archivio Enea Bossi

Finally, on March 18, 1927 — today in aviation history! — the Italians wheeled out the Pedaliante one more time for a record attempt.  Based on their collected data from dozens of flights, they recognized that if they used the catapult to launch starting from 9 meters high (thus, after launch, the Pedaliante would be as high as 18 meters in altitude), Major Casco could stretch the glide to a full kilometer in distance, pedaling as hard as he could.  The catapult was set up at Cinisello Airport, located near Milan, Italy.  Indeed, it worked — Casco made it over a 1 kilometer, though the prizes were withheld because they specified that no catapult or launch assistance could be used.  Nonetheless, it was a major milestone. 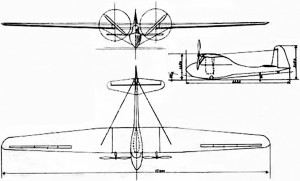 Basic plan of the Pedaliante.

In the years that followed, the story of Pedaliante has been largely forgotten.  Those who are familiar with it say that while the Pedaliante was a masterpiece of engineering for its time, the real story was actually the physical strength and prowess of Major Casco, without whom they claim the aircraft could never have flown.  This forgets two things, however — first, the Pedaliante could have been made with a single propeller, lightening the aircraft considerably and achieving nearly the same thrust-conversion ratio (perhaps even better); and second, that had the Italian Air Ministry not inflicted the powered-aircraft design structural strength requirements on the Pedaliante, it would have been nearly 40 pounds lighter.

Who knows?  Maybe Major Casco just might have flown in the Pedaliante after all.  Perhaps someday, a replica will be constructed to the lighter weight to see just what it might have done. 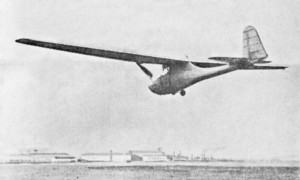 How many flights were performed by the Pedaliante in all from 1935 to 1937 before retirement?