Belgium’s top balloon-busting ace, Willy Coppens, would drop down from on high, his Hanriot HD-1 fighter plane swooping in toward his favorite target — a German artillery observation balloon, the type known as a “sausage” or “dragon”.  Time and again, his deadly fire would hit the German balloons, igniting their gas bags into an inferno of hydrogen.  Then, as fast as he had come, he would veer away and back across the lines while German anti-aircraft artillery would fire pointlessly in his wake.  In the summer of 1918, he knocked down dozens of balloons and became the recognized master of the art, a skill known on both sides of the lines.

If anything, his plane was unmistakable since he had it painted in blue and emblazoned the fuselage sides with the symbol of a thistle sprig wearing a top hat.  Recognizing the deadly killer as he came, again and again, the Germans finally decided that he had to be taken down.  Carefully, they developed a plan.  They would pack a balloon with explosives and winch it into the skies, then wait for him to come.  When he did, they would wait until he was near enough, making his attack pass, and then they would trigger the bomb, destroying not only the unmanned decoy balloon but killing Coppens as well.

Everything was prepared.  The Germans put the balloon into the skies — and they waited, certain that this time, they would get him.

Willy Coppens was unmatched in his skill downing German “kite-balloons”.  His Hanriot HD-1 was specially equipped for the task, its usual light armament was replaced with a British 11 mm Vickers machine gun, giving him firing power that was the key to his success.  As Coppens himself later recounted, “I was to find the 11 mm Vickers an invaluable acquisition.  I had it mounted on Hanriot No. 17, and kept Hanriot No. 24 fitted with an ordinary machine gun.”

To ensure victory against the hydrogen-filled balloons, he would load up on incendiary ammunition and head to the front lines, always following reports of where German artillery “sausages” were deployed.  If he could shoot them down, the German artillery firing at Allied trenches would be less accurate, resulting in fewer ground soldiers dying.  It was hard work, however, as the balloons were ringed with more and more anti-aircraft artillery for defense.

Speed and a surprise attack was the best approach.  Coppens’ higher firepower enabled him to achieve success where others often failed.  He described one of his attacks as follows:  “I […] crossed the lines rather too high, in the neighbourhood of 9,000 feet, from which level I dived at the balloon, and I approached my target at a greatly excessive, terrifying speed — much more than any 125 m.p.h.”  At such speeds, the German AAA fire was less accurate, as they would usually improperly lead the plane enough to hit and their bullets would pass harmlessly in Coppens’ wake.  In addition, by flying in quickly, he was in range for less time, further reducing his risk of getting hit.

While assignments to balloon busting missions were dreaded by the other pilots, Coppens willingly volunteered for the job, even taking on the low altitude balloons which were the most difficult as the accuracy of the AAA defending fire was the most deadly.  On one day, he downed three balloons — writing about it later with a certain nonchalance, he related, “On June 30, I obtained my eleventh, twelfth, and thirteenth victories, over, respectively, Bovekerke (at 6.30 a.m.), Gheluvelt (at 8.30 a.m.), and Passchendaele (8.34 a.m.).”

It seemed too that sometimes Coppens was playing with the Germans, as if purposefully antagonizing them with his creativity and innovative tactics.  Once, for instance, when the Germans put a machine gun in the balloon’s basket to fire back, he realized it while closing.  Instead of prosecuting the attack, he darted upward and landed on top of the balloon, safely out of sight of the gunner and the AAA emplacements below.  What could they do?  None dared fire through the balloon to try to shoot him down, but they knew his plane was there.

For a time, Coppens waited there, having shut down his Hanriot’s engine as the plane sat precariously on the top of the balloon’s fabric.  Finally, thinking that maybe their enemy’s engine was hit and inoperative, the German ground crew winched the balloon down in hopes of capturing him.  Once again, they were tricked when he quickly started his engine and slid off the top of the balloon to speed safely away, leaving the gunners on the ground in shock.

By the beginning of August 1918, Coppens had amassed 21 confirmed kills — just two were other airplanes.  Nineteen German kite-balloons were lost to Coppens’ deadly attacks, making artillery spotting in his sector in the north one of the most dangerous operations at the time.  Their plan was diabolical. The Germans elected to pack the basket of a balloon with explosives and reel it up.  For good measure, they ordered their artillery to begin firing at the distant trenches.  Reports would certainly reach the Belgian pilot and they knew he would come.

They did not wait long.  On the morning of August 3, 1918, Coppens flew in, making his usual surprise attack.  On the ground, the crews waiting and watched as he closed.  He opened fire and almost at once the balloon began to sag, then it caught fire.  As he broke off, passing close by, they pulled the trigger.  The explosion was deafening and devastating.  Incredibly, the blue Hanriot flew out the other side of the explosion, damaged, but not downed.  Coppens was uninjured and returned to his base — wiser and more cagey than ever.

By October 1918, Coppens score had risen to 36 confirmed kills.  Just three of his kills were German airplanes, the rest, a staggering 33 in total, were balloons.  On October 14, Coppens flew his final mission.  He would down his first balloon that day at Praatbos, his 37th and final kill.  He was already Belgium’s leading ace with more kills than the next five aces from his country if added up together.  Not finished for the day, he turned then toward another reported balloon sighting, at nearby Torhout.  Spotting it, he climbed to altitude and began his attack, flying through a hail of AAA fire.

In the end, it was just a lowly ground gunner who scored a hit.  Many pilots will attest that for each, a silver bullet has been made — the one lucky shot that will hit when all others miss.  In the case of Willy Coppens, a silver bullet really wasn’t required.  Given the volume of gunfire he endured while making every attack, it was something of a miracle that he had survived so long.  As it was that final day, the bullet that hit him didn’t kill him.  It struck his leg, shattering his tibia and severing the main artery.  Bleeding profusely, alone in the cockpit (the fighter pilot’s story is one of a single seat pursuit plane, after all), he did his best to stop the bleeding while he pointed the nose of his Hanriot back across the lines.  He came down at Diksmuide in a crash landing, barely conscious.  Friendly forces carried him to a hospital where they had to amputate his leg.  A month later, the Great War ended while he was still recovering.

From his first kill on April 25, 1918 (today in aviation history!), to his last on October 14, 1918, Willy Coppens had downed 34 balloons and three aircraft — an average of six per month.  It was an astonishing record and, after the war, he was asked to write his experiences, capturing the full story of his service and daring balloon-busting career.  First, however, he recovered and learned to hobble around on an artificial leg.  Honored as a hero, he was knighted by the King of Belgium — the name he took on with his knighthood expanded to Major Chevalier (his titles) Willy Omer Francois Jean Coppens de Houthulst.  The “de Houthulst” part was added with the knighthood; fittingly it was the name of a small forested area that he regularly overflew on his way to the front lines.  The rank, “Major” was his officership from the war and the word, “Chevalier” is French for “knight” or “sir”.

Then, through the 1920s, he served as an Air Attache for the Belgian foreign ministry.  During that time, he continued flying and even set a record parachute jump.  In 1933, finally his book, “Days on the Wing”, was published by the Aviation Book Club in London.  Later, in the 1970s, it was republished in a newer edition and renamed “Flying in Flanders”.

He retired to Switzerland in 1940 and watched as the Nazis invaded Belgium and France, overwhelming and occupying much of Europe.  From his home in Switzerland, he undertook an ongoing campaign of organizing and assisting the Belgian resistance.  At the end of the war, with Belgium once again free, he retired once again, married and lived out the rest of his life in peace.

Who were the next top five aces from Belgium during World War I and how many victories did each have? 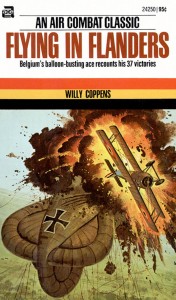 2 thoughts on “Days on the Wing”