Vanished Without a Trace

Damer Leslie Allen and Denys Corbett Wilson were two Irishmen who were among the first pilots in the early days of aviation.  In 1912, both were flying regularly at Hendon and knew each other well.  Both men flew Blériot XI monoplanes and had many shared experiences.  Thus, it was not unexpected that in April 1912, the two men decided it was time to make a first successful crossing from England (or Wales) to Ireland.  In September 1910, Robert Loraine, an Englishman, had made the flight but had fallen into the water just 200 feet short of the beach.  It was still considered a success but two things were wrong — first, Loraine not only hadn’t successfully landed on the beach, in fact he had crashed into the water; and second, he was an Englishman after all!  Thus, the two Irishmen decided that the record would be attained first and foremost properly and second, by a man of proper Irish blood.

Yet where two men left Hendon in their Blériots on April 17, 1912, making their way to the coast to prepare for the crossing, only would make it and completed the journey today in aviation history, on April 22, 1912.  As for the other, he would disappear without a trace. 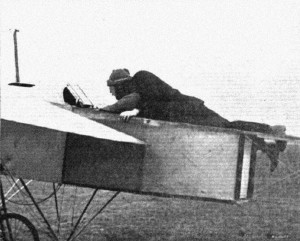 D. L. Allen tunes up his Blériot at Hendon a few days before departing to attempt a successful crossing to Ireland. Source: Flight, April 26, 1912

Of the two men, Corbett Wilson, seemed the unlikely candidate to make it successfully.  While D. L. Allen had arrived in Wales and was ready to depart on the morning of April 18 — and indeed, he did depart that very day — Corbett Wilson suffered engine trouble and was forced down before even departing across the sea.  In fact, he had two crash landings on the way to the coast and was delayed while he awaited the arrival of his mechanic (it was subsequently discovered that the engine had the wrong grade of castor oil). 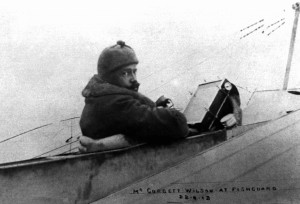 Corbett Wilson prepares to fly his Blériot across to Ireland.

Both pilots were fairly inexperienced, though it can hardly be said that their plane’s weren’t fragile and unreliable.  Thus, the news of D. L. Allen’s disappearance did not dissuade him and so, on the morning of April 22, at 5:37 am, he set out for his flight, as reported in Flight, the newsletter of the Royal Aero Club, which covered the details a week later in its April 26, 1912, edition:

Now that well over a week has passed since Mr. D. Leslie Allen set out from Holyhead at about seven o’clock in the morning of Thursday of last week, to cross the Irish Channel, and no news of his whereabouts have come to hand, it certainly seems that it is our sad lot to mourn another British life, sacrificed — we think again quite unnecessarily — in the practising of the sport.  It was on the previous day, the Wednesday, that he with Mr. Corbett Wilson, set out from Hendon to fly in company to Dublin.  There was no wager between them as to who should get there first, as has been generally seated. They simply had a feeling that they would like to visit their native island by the new method of locomotion, and they both started off in friendly rivalry to fly there together. 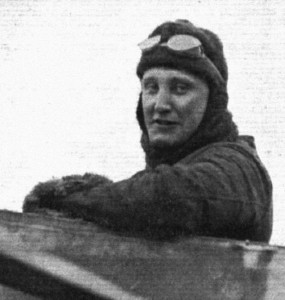 Portrait of Damer Leslie Allen in the cockpit of his Blériot. Source: Flight, April 26, 1912

It is worth noting that for some weeks after the flight, many thought that the two men had bet one another some money as to which would successfully make the trip first.  That turned out not to be the case and it seems that whatever happened to D. L. Allen, it wasn’t from a rush to be first that caused his problems.  Most likely, the best technology of the day, a Blériot monoplane, had simply failed him.

At that time it was thought by those at the aerodrome that the flight was an unusually risky one for such comparatively inexperienced pilots to attempt.  Further, so hastily had the trip been arranged that no precautions were made against the possibility of having to descend in the sea.  They both left Hendon soon after half-past three p.m. on Wednesday, and Allen, following the London and Northwestern Railway line, arrived at Chester about half-past six in the evening, after landing some ten miles the other side of Crewe to ascertain his whereabouts, Corbett Wilson landed the same evening at Almeley, about fifteen miles northwards of Hereford.

Just after six on the following morning Allen started from Chester and passing over Holyhead an hour afterwards, flew out to sea.  He has not been seen or heard of since.  His friend, Corbett Wilson, left Almeley at half-past four that afternoon and was forced to land some few miles further on at Colva in Radnorshire. 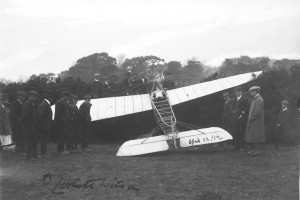 Corbett Wilson’s Bleriot X1 ended up in the hedge with a broken propeller at the end of his successful crossing to Ireland. Photo Credit: Corbett Wilson

Corbett Wilson Has a Go

It wouldn’t be until Sunday, April 22, that Corbett Wilson would finally be ready to go.  His flight, as reported, happened as follows:

On Sunday morning early he set off again and this time reached Fishguard, leaving again at six o’clock on the following morning  Monday, and flying across St. George’s Channel in the direction of Wexford.  One hour and forty minutes was occupied in crossing the Channel and a landing was made at Crane, two miles from Enniscorthy, the trip being the first occasion that the strip of water separating Ireland from the main land has been entirely crossed by aeroplane.  It will be remembered that Mr. Loraine’s attempt in 1910 failed by some 300 yards.

It should be mentioned that Corbett Wilson’s Blériot 100 minutes of flight across included 30 minutes in heavy rain — and one must imagine him in an open cockpit fabric covered biplane flying through heavy rain over the water, without instruments to truly understand how challenging the journey was.  At the end, exhausted, he selected the wrong field and ended up unable to stop before the field “ran out”.  He crashed his Blériot into a hedge, but walked away triumphant. 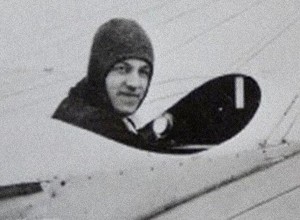 Vivian Hewitt, the Welsh aviator who flew across to Ireland just a week later.

A Welshman Repeats the Feat

Not to be outdone, or perhaps just to make the flight for the experience and adventure of it, the famous Welsh aviator, Vivian Hewitt, set out a week later to also fly across to Ireland.  His preparations were thus duly reported:

Mr. Vivian Hewitt also has the intention of attempting the crossing to Ireland, but his route is to be from Holyhead to Dublin across the Irish Sea.  At the time of writing he is waiting at Holyhead for favourable weather.  He left Rhyl at 5 a.m. on Sunday morning and after remaining up for an hour and twenty minutes was forced to land at Plas in Anglesey.  His flight was made at an average of quite 5,000 ft., for he says he could distinctly see over Snowdon.  The wind was boisterous in the extreme and he testifies to the fact that had he remained up much longer he would undoubtedly have been ill, so much was he tossed about.  The section from Plas to Holyhead was flown on Monday morning, starting from the former place at about 9.30.  Mr. Vivian Hewitt has his machine in Lord Sheffield’s grounds and will continue his flight as soon as conditions prove favourable.

As the weather allowed, Hewitt did make the flight and was successful, completing it on the very day that Flight issued its newsletter — on April 26, 1912.  He set out from Holyhead and landed at Dublin’s Phoenix Park, essentially without incident.

As for Damer Leslie Allen, no trace of his plane or body were ever found.


Excellent story of endeavour. However just a small point — the portrait of Damer Leslie Allen in the cockpit lists WILSON in error. Please double check the caption.

Thank you for pointing out one that slipped through the final edit!