In 1966, Sheila Scott, a British actress who had learned to fly a few years earlier, decided to pursue her passion in aviation by setting a series of records.  To that end, she purchased a brand new Piper Comanche PA-24-260B, a single-engine American airplane that she had registered in the UK as G-ATOY.  She named it “Myth Too”.  The plane, a type that is in the same class as a common single-engine Cessna 172 or Piper Warrior, types often used in flight training for new pilots, featured a more powerful, fuel-injected Lycoming IO-540 engine with 260 hp.  In short, it was more suited to weekend flying than any type of speed trials, endurance or range records — or so went the common wisdom.

Sheila Scott, however, saw things differently.  For her first challenge, she set her sights on a round-the-world, record-setting flight.  Today in aviation history, at 4:55 pm on May 18, 1966, Sheila Scott took off from London’s Heathrow Airport and headed east into good weather.  Incredibly, her goal was one that had somehow never before been attempted — not only to circumvent the globe, but to do it solo, alone in the cockpit, making it the longest solo flight in history.  She also flew almost exclusively barefoot, a personal quirk that allowed her to better feel the vibrations of the plane through her feet.

Photo of Sheila Scott at a press conference.

Her departure from London, however, was delayed several times due to avionics problems, principally with her radio.  Finally, when all was repaired, she flew first to Rome where additional radio problems further delayed her onward progress.  Her autopilot too burned out, leading her to consider that something might be basically flawed with the aircraft’s electrical system.  She arrived in Karachi, Pakistan, on May 22, still suffering badly from recurring electrical problems.

Her flights, in her own words, “The major aims of this British attempt are to be the first Briton round solo in a light aircraft; to make the longest solo flight in history, touching the Commonwealth wherever possible; to be the first non-American woman round solo (third woman round); and to break certain records which necessitate the weight restrictions.”  For much of the rest of the flight, she suffered from electrical problems, though she made the journey successfully, even the long legs over the South Pacific where she island-hopped, even stopping at Canton Island in a flight that recalled Amelia Earhart.

As it was, she was rounded criticized by the British press and other aviators for not flying a British-made plane, but rather an American plane built by Piper.  She explained quite simply she would have rather flown a British plane, indeed the Beagle 242 would have been fine, but to have done that she would have had to fly the prototype!  No other British aircraft were available that could successfully complete her flight within the weight class she had selected.  She also pointed out that she enjoyed extraordinary support from virtually all sides within the British aviation industry, down to and including the provision of a personal mirror in her plane so she could check her make-up prior to landing. 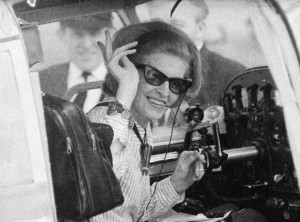 In the cockpit of her single engine Piper 260B Comanche — ever the movie star and actress, she sports a pair of Hollywood style sunglasses.

The Full Route of her Flight

For those considering tracing the route she took on the map — or flying it themselves! — the following are the way points that defined her trip: 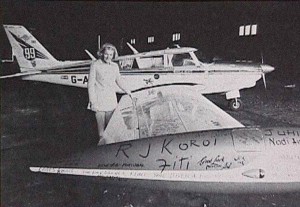 Sheila Scott and her Piper Comanche, its wings and surfaces covered in penned good luck wishes.

Her Place in Aviation History

At each stop along the way on her first round the world flight (she later flew another two circumnavigations), she asked bystanders and others aviators to sign their names on her plane.  Many wrote messages conveying their best wishes for a successful flight, others just wrote “Good luck!”, and so forth.  One person, in a variation on the American term for good luck, “break a leg” and the German similar phrase, “break your bones”, attempted instead the words, “I hope you crash.”  She didn’t and by the end of the flight, the plane was covered in signatures.  It was a fine testimony to her daring and extraordinary achievement and, for her, it cemented her position as as a pilot in the public sphere, the center of attention and a heroic figure who strode among the giants of aviation’s storied past.

Her Comanche 260B “Myth Too” at Heathrow a couple of years after her record flight. Even then, it still carried the signatures and best wishes of hundreds.

The flight had been expected to take six weeks to complete and, at the end, she could rightfully walk tall.  She finished early, arriving on June 20, just four and a half weeks after having departed.  Ultimately, she was made a Dame of the British Empire in recognition of her extraordinary achievements.  She had become one of the members of the last generation of the great aviators in the style of the 1910s and 1920s, whose exploits made her a more modern Amelia Earhart, “Pancho” Barnes, Amy Johnson, Vivian Hewitt, Harriet Quimby and Jean Batten — nonetheless, many have never heard her name as her achievements were overshadowed by the advances of flight which had, in the late 1960s and early 1970s, taken man to the Moon.  The era of aviation’s popular appeal had been overshadowed by the rocket, astronauts and cosmonauts.

She did have her quirks — the barefoot flying was but one.  When she flew, she sometimes took along a doll named “Bucktooth” as a passenger (she would sometimes speak to it during flights).  She also used to hang a champagne cork from her overhead compass bracket, which would swing around — actually, this served as a helpful visual indicator to her yaw balance! 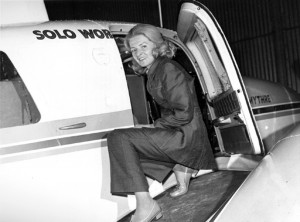 Sheila Scott enters the cockpit of her twin-engined, Piper Aztec “Mythre” during her 1971 flight that flew over the North Pole. Source: NASA

Over the following thirteen years after her first flight around the world, Sheila Scott and her Piper Comanche, “Myth Too”, lived up to her new popular status as a leading aviatrix.  With her plane and later, twin-engined Piper Aztec that she named “Mythre”, she set 104 aviation records, many in her aircraft’s light class.  Among other incredible journeys, she competed solo in a 14,000 mile air race between England and Australia.  In 1971, she flew over the North Pole, becoming the first woman to achieve that feat.

Ultimately, she suffered a plane crash and her precious Comanche was written off as an insurance loss — she came through it alright.  In 1988, after a long and costly battle with lung cancer, she passed away at London’s Royal Marsden Hospital.  She was just 66 years old, having been a cigarette smoker (as were many in her day) who typically smoked heavily, usually with a long, graceful cigarette holder in her hand.  Today, her plane can be found reconstructed and on display at the National Museum of Flight in East Lothian, Scotland.

Looking back, it is worth noting that Sheila Scott, an actress who made no claim to any significant technical abilities, had become one of Britain’s greatest aviation record holders.  She had come from an unlikely beginning — requiring nine months to solo! — and yet had risen to stardom within England for her incredible deeds.  Her view of her own life can be best summed up by her one-time statement:  “Each flight is a triumph, not only over machinery, weather and terrain but over oneself.”


What an incredible woman she was! Her spirit, strength of character, determination and persistence was remarkable.