The Memphis Belle, a B-17 with the 324th Bomb Squadron of the 91st Bomb Group, flew its 25 mission at this time in history — the crew, under the command of Capt. Bob Morgan, had completed a total of 29 missions in all, four on other aircraft.  With that, their tour was completed and, just a few weeks later, they would depart for a War Bonds tour across the United States.  For the USAAF, the mission was a landmark event — prior to that, with but one exception, no other bomb crew had made it through all 25 missions to complete their full tour.  While others had gotten close, they had all failed to complete the 25th mission, most being shot down.

The odds in 1943 were that the USAAF lost roughly 5 percent of its planes on each mission.  Thus, for the bomb crews, surviving a tour of 25 missions was a tall order.  Yet there were no shortage of volunteers. 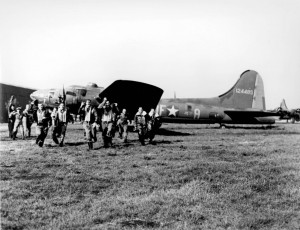 Exactly 70 years ago today, the 91st Bomb Group was tasked with a mission to bomb the U-Boat pens at Lorient, France.  As missions went, the flight that day was a “milk run”, with no losses.  The following is the official record of the mission, recording the planes flown, the claims of enemy fighters shot down or damaged and the casualties suffered.

Practically all bombs of this Group fell in target area, beginning short of target and stringing through M.P.I.  Smoke and large fires visible long after leaving French coast.

The following is the final mission of the Memphis Belle, flown not by Capt. Morgan, but by another aircraft commander, Lt. Anderson.

A Salute and Final Thoughts

The flight crews who flown bomb missions during the critical turning point year of 1943 suffered greatly.  Many were shot down, often badly injured or killed.  Thousands became POWs.  Escort fighters didn’t have the range to attend long range and the Luftwaffe’s defenses were strong and well-skilled, yet to suffer the extraordinary losses of late 1943 and 1944.  The men of the Memphis Belle were real heroes, but they were also lucky, twice over.  First, they survived with only one man getting injured in their entire tour.  And second, they got to enjoy a War Bond tour of the USA afterward where they were celebrated as the true heroes they really were.

Of course, they really weren’t the first crew to survive 25 missions in their plane — that honor actually went to another flight crew and airplane, the B-17 Flying Fortress “Hell’s Angels” of the 303rd Bomb Group.  Why didn’t they receive the laurels given to the Memphis Belle?  It is hard to say, but one thing is worth pointing out — at the end of their tour, the crew of the Hell’s Angels signed on for a second tour and continued to fly, finishing nearly twice the missions before they returned to the USA.  They did get their War Bond tour, but not for being the first plane and crew to make it through 25 missions, but rather for having survived two tours.

Those were heroes of the first order, no doubt.