By 1965, the Vietnam War was rapidly expanding.  US Military and South Vietnamese forces were deeply involved in a mix of counter-insurgency and open conflict with regular North Vietnamese units.  Meanwhile, the US had dominated the airspace over much of the region and, despite losses to increasingly effective Soviet-sponsored air defense units, American aircraft could undertake decisive airstrikes when needed — except at night when the weather was bad.  At the time, only two aircraft in the US Military had true all-weather airstrike capabilities — the US Navy’s A-6 Intruder, which was not in common use in the theater; and the USAF’s B-52 Stratofortress, which was a nuclear weapons delivery aircraft.

To planners, the B-52 Stratofortress offered the ideal solution with night, all-weather bombing.  If the political concerns about using a plane designed to drop atomic weapons instead for tactical intervention could be overcome, then a solution to the emerging challenge might just be at hand.  After considerable political debate within the Johnson White House, the USAF started modifications and crew training in 1964 and subsequently launched the first Arc Light mission on June 18, 1965 — today in aviation history.  Despite the rosy projections of SAC planners, the mission was a disaster. 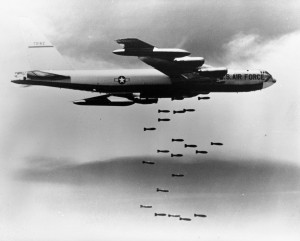 The target of the first Arc Light was in small one-mile by two-mile “box” located within the Bén Cát District of South Vietnam, just 40 miles to the north of Saigon.  Intelligence analysts had determined that a sizable force of Viet Cong guerrillas were encamped there.  The Strategic Air Command, which controlled the B-52 fleet, deployed 30 of its specially modified B-52F Stratofortresses for the airstrike.  The planes had new equipment in the bomb bays for the release of large numbers of general purpose conventional iron bombs.  In all, nearly 50 bombs per aircraft would be loaded for the mission.

The aircraft were deployed with flight crews, maintenance and ground support personnel, plus all mission equipment to Anderson AFB, Guam.  This itself proved a large undertaking, though Anderson was a well-established base that dated from the closing year of World War II where it had served as the jump off point for the mass scale strategic bombing of Japan.  From Anderson AFB, the flight to the target area would traverse approximately 2,500 miles in each direction, undertaking aerial refueling along the way.  However, this type of long range mission was one for which the SAC flight crews had trained extensively. 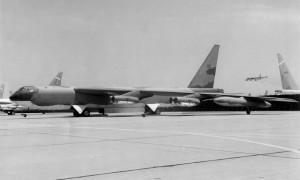 Boeing B-52F-65-BW (S/N 57-0153) of the 93rd Bomb Wing at Castle Air Force Base, California, on August 1, 1969. This aircraft and most of the others in the image undoubtedly flew Arc Light missions in the late 1960s, hence their SEA camouflage patterns. Photo Credit: USAF Museum

The B-52s would fly in “cells” of three aircraft each — a total of ten cells in all — at high altitude.  For bomb targeting, the drop would be controlled with the B-52′s on board Bomb-Nav System.  It was expected that the 30 B-52s would drop around 1,500 bombs into the same tiny target area — one mile by two miles in size.  Enough explosives would saturate the area that it was theorized that nothing could possibly survive.  Further, with the altitude at which the Arc Light mission would be flown, the enemy troops on the ground would neither hear nor see the B-52s as they flew above, hidden in the night skies.  The surprise would be complete and, it was expected, the killing would be absolute.  In fact, among B-52 strikes, the first Arc Light mission would concentrate more bombs in one location than most missions that would follow — strategic air power would make a huge entrance into the Vietnam War.

As the 30 B-52 Stratofortresses took off from Guam, a typhoon was passing nearby.  Though it didn’t interrupt the mission, the upper level counter-rotation unexpectedly resulted in a stiff tailwind that pushed the B-52s faster on their outbound track toward South Vietnam.  The first B-52s arrived at the refueling point over the South China Sea seven minutes early, while the KC-135 Stratotanker refueling aircraft were still en route.  Missing a refueling was impossible and so the B-52s followed standard procedure and began a wide orbit to allow the refuelers to catch up.  The lead flight — Green Cell — began a gentle 360 degree turn in the night skies over the midst of the South China Sea.  Against all odds, Green Cell flew directly into the path of the trailing Blue Cell and Yellow Cell.  Nine bombers were essentially on a collision course in three formations of three. 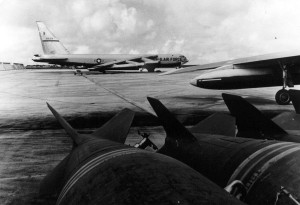 The three cells never saw one another and in the darkness and in an instant of terrible luck, two of the B-52F Stratofortresses collided.  The rest of the huge planes passed each other — nobody can say with certainty just now close they were when they missed.  Aboard the two stricken bombers, the damage from the collision was catastrophic.  Of the two crews of six men each, eight were killed.  Later, four were found alive floating on the waves of the South China Sea by an HU-16A Albatross flying boat.  In heavy seas, the Albatross crew set it down for the rescue.  Sadly, however, when the Albatross tried to take back off, it sustained damage from the heavy seas.  The plane had to be abandoned some time later when the crew could be transferred to a  ship — first a Norwegian freighter and then a US Navy ship.  Those events, however, would come the following day — and so we return to the ill-fated mission.

Another of the Arc Light B-52F Stratofortresses en route to South Vietnam suffered a major failure in its hydraulic systems and on board radar systems.  At first, the crew pressed on, but then missed the scheduled tanker rendezvous.  As a result, they elected to divert to Okinawa and execute an emergency landing, which was successful. 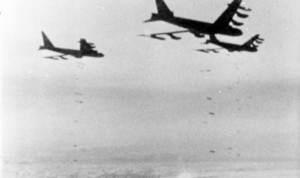 A three-plane “cell” of B-52s undertakes an airstrike in later years as part of Operation Niagara, the support for the USMC ground forces at Khe Sanh. Photo Credit: USAF Museum

Finally, the remaining 27 B-52F Stratofortresses reached South Vietnam.  There, in good formation, they turned to make a run down the length of the one mile by two mile target box.  One after another, they salvoed their bombs from altitudes that ranged between 19,000 feet and 22,000 feet.  Thereafter, the fleet of 27 planes turned back for the long flight to Guam.  It had taken nearly seven hours to reach the target and another 6 hours or so to return to Anderson AFB.  The problems on the inbound run behind them, the crews hoped that the return flight would be uneventful.  However, even then, problems arose when one of the bombers developed electrical problems and had to divert for an emergency landing in the Philippines.  The remaining 26 bombers made it safely back to Guam.

Post-mission bomb damage assessment was accomplished by deploying a team of observers to the target site.  What they found wasn’t too promising.  Fully 50 percent of the bombs dropped with the B-52s’ on board Bomb-Nav Systems had missed the target box entirely, causing damage throughout the surrounding countryside.  Further, in searching for Viet Cong casualties, the team came up short.  They did, however, find clear evidence that the Viet Cong had been there before the bombing.  Somebody had tipped them off to the impending airstrike and they had packed up and moved hastily out of the target area.  As a result, despite the high hopes pinned on the B-52 Stratofortress for conventional bombing, the first of the Arc Light missions had been a pointless attack on an empty area of the countryside.  Eight Americans had died and in the coming days only one of their bodies would be recovered.  To this day, the rest remain listed as Killed, Body Not Recovered. 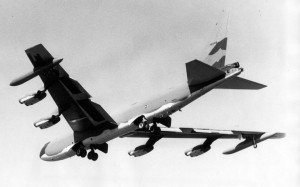 Despite the problems encountered in the first Arc Light mission, it served as a starting point for the steady improvement in tactics, systems and experience within the Strategic Air Command.  Future Arc Light missions, a term that later was applied generically to almost all B-52 strikes, would prove their value.  SAC had a steep learning curve, but it was one that the organization could face with its usual dedication and studied approach.  Later missions would incorporate the COMBAT SKY SPOT system with ground-assisted radar targeting.  This would provide vastly superior to the on board Bomb-Nav System, enabling sufficient targeting even for close air support, a much needed asset in the coming Battle of Khe Sanh. 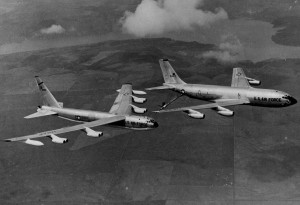 While many imply that B-52 losses over Vietnam and surrounding countries were steep, the reality proved sharply different.  From the first Arc Light mission in June 1965 to the last B-52 airstrike in August 1973, the Strategic Air Command flew 126,615 sorties in theater.  Just 31 of its B-52s were lost.  Of those, about 40 percent were downed due to maintenance problems and other causes, such as landing mishaps.  In eight years of intensive combat air operations that followed, just 18 were lost to enemy fire.  In other words, those first two losses that night constituted 2 of the 31 aircraft losses — 6.5 percent of the overall losses.

Impressively, after the first Arc Light mission, the USAF released a statement that the mission had scored hits with “pinpoint accuracy” — a completely inaccurate statement.  In turn, that story was picked up by the Associated Press and subsequently ran in many syndicated newspapers nationwide.  Thus, it seems that the old adage that truth is often the first casualty of warfare held true — even for the USAF at the time.


I believe it would add to the “Arc Light” story if information could be obtained on the bomb loading teams that worked on Guam and in Thailand in support of the strikes. This is a great aviation story that would be amplified by including the ground support side of the mission.


Interesting on B-52 bombing accuracy. In ’73 the USN went up in the Gulf of Tonkin to remove mines laid by the USAF. One of the support ships, my old destroyer USS WARRINGTON (DD-843) hit two of the mines which were reportedly over 100 miles from where they were supposed to have been laid. WARRINGTON was so badly damaged she had to be scrapped. Might make a good story in the future…


My father is a retired boomer named L.C. Forester. He was preparing to refuel one of the B-52s involved in this raid when an incoming B-52 flew into his receiver. He had a ringside seat for the tragic event. He says the mission was screwed up from the very beginning when the KC-135 crews got their final briefing in an insecure hut with open windows guarded by Okinawan sentries. Upon returning to the base his crew was debriefed by a one star general and shipped out the next morning to Thailand on verbal orders. The cover-up had begun. He is probably one of the few eyewitnesses left. He would love to tell the story of this event.