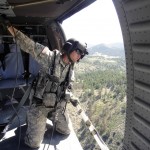 The wildfires of 2012 were particularly deadly and the intensity of the blazes was astonishing.  This feature is our salute to those who flew missions contain the destruction, including to those who were killed and injured in the effort.  We express our thanks, our gratitude and our sorry to those who have lost so much.
==> VIEW FEATURE STORY 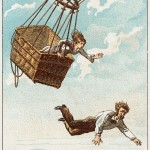 Answering the Call of Wings

The triumphs and glory of early aviation are captured in two sets of collecting cards from France that date to the mid-19th Century.  These cards are in the Tissandier Collection at the Library of Congress; they are wonderful ephemera from a time when early aviation captured the imagination of mankind.
==> VIEW FEATURE STORY 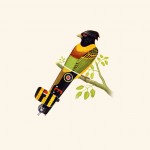 Birds of a Feather

Valero Doval’s artistic collage series, Aerofauna, draws equally on avian and aviation themes.  He artfully combines the head, torso and wings of birds with the tails of well-known aircraft from World War II.  The subtle color sense of Doval comes through in each collage and one gets the sense that the two parts were somehow meant for each other all along.
==> VIEW FEATURE STORY