In the early morning hours of August 15, 1944, the invasion of southern France began — Europe’s second “D-Day”, called Operation Dragoon.  Though less known than the Normandy landings, the invasion of southern France was a decisive victory and one that was hard fought.  Notably, it also involved air support from the US Navy, thus putting Grumman F6F-5 Hellcats over France in direct contact with the German Luftwaffe. 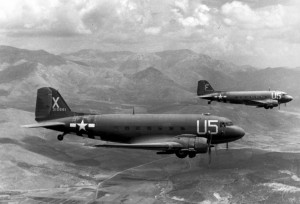 USAAF C-47A Skytrains from the 12th Troop Carrier Wing, loaded with paratroopers on their way for the invasion of southern France during Operation Dragoon. Photo Credit: USAF

For the Allies, Operation Dragoon was a complete success.  The combined forces of the US Army’s 1st Airborne Task Force parachuted into the hills overlooking the beaches in the vicinity of St. Tropez, east of Marseille.  The parachute drop was followed by a morning amphibious assault by the U.S. Seventh Army.  A day later, the French First Army landed on the beaches.  The drive inland then began in earnest.  Arrayed against the Allied forces was the German Heeresgruppe G (Army Group G).  The Germans were ill-equipped, spread thinly, and under supplied.  Complicating matters for the German leadership, resistance forces had severed communications.  The speed of the Allied invasion and drive inland had taken them by surprise. 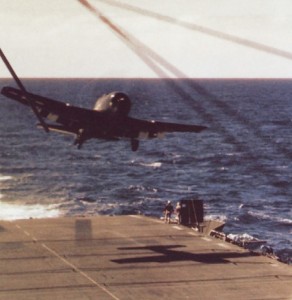 A close-up of an F6F-5 Hellcat of VOF-1 as it is waved off from landing aboard USS Tulagi (CVE-72) after a ground attack sortie during the first day of Operation Dragoon. Photo Credit: US Navy (courtesy of Russ Egnor, republished in the book, “Carrier Air War In Original WWII Color” by Robert Lawson and Barrett Tillman)

Within days, the most capable elements of Heeresgruppe G made a retreat toward Switzerland, leaving behind 130,000 soldiers, including many from the East and third tier forces to surrender.  The Allies flew extensive resupply operations with C-47s making hundreds of sorties that brought in ammunition, food and materiel to the men engaging in battle across the region.

In Operation Dragoon, the Allies liberated the rest of France within just four weeks.  They opened the southern ports along the Mediterranean for logistics supply into France, which proved to be the key in supporting the drive toward Berlin.  Later calculations estimate that 1/3 of all logistics support for the advance landed in southern France. 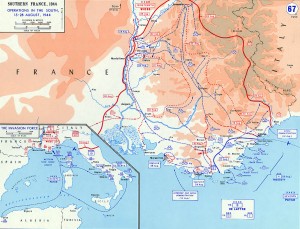 US Military instructional map of Operation Dragoon, studied at West Point. Credit: US Department of Defense

During Operation Dragoon, an unexpected and little known battle played out as US Navy F6F-5 Hellcats flew missions over Europe against the Luftwaffe.  On August 15 alone, the first day of the invasion, 100 sorties were flown over beaches and inland, virtually all in the ground attack role.  Launching from the USS Tulagi, the Hellcat squadron VOF-1 under the LCDR W.F. Bringle, USN, and VF-74 from the USS Kasaan Bay under the command of LCDR Harry Brinkley Bass, USN, provided ground support to the the infantry and tanks as they made their breakout from the beaches.

In addition, a small seven plane night fighter unit of F6F-3N Hellcats with radar systems were employed from a detachment based in Corsica — each night, two would land on the USS Tulagi to stand readiness on deck in the event of an incoming night attack.  As it happened, they were never needed.

The first Hellcats that flew against the Luftwaffe and Wehrmacht came from USS Tulagi.  The first Hellcats to fly over France took off at 5:46 am, right with the first light of dawn.  By the end of the operation, VOF-1 had flown 68 missions and 276 sorties — VF-74 flew a similar number. 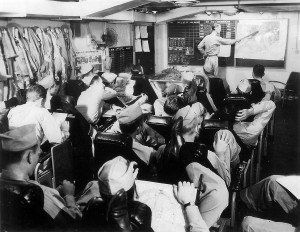 VF-74 Hellcat pilots are briefed for a ground attack mission over southern France while sitting in the Ready Room on board the USS Kasaan Bay in August 1944 during Operation Dragoon. Photo Credit: US Navy

The German Luftwaffe, however, did not make much of a showing to challenge the US Navy in the skies.  On the first evening off Cap Dramont, a Ju-88 sank a fully loaded tank landing ship (USS LST-282) by using a glide bomb.  On D-Day+2, another set of torpedo attacks by Dorniers and Ju-88s were unsuccessful after the attackers encountered heavy AAA fire.  Despite the sporadic air response, however, Allied anti-aircraft fire was more successful against American pilots — it was a case of trigger happy Navy gunners unknowingly engaging in “friendly fire”.

Direct contact between the Luftwaffe and US Navy aircraft finally occurred in the morning of August 19, when three Heinkel He-111s were spotted by a flight of four Hellcats from VOF-1.  With critically low fuel, however, the American Navy pilots could not engage.  The He-111s made their escape successfully.

It soon became apparent that the German retreat was underway.  The roads at Remouline were snarled with traffic as a large German convoy pressed northward hoping to escape from the battle area.  Hellcats were launched to strafe and bomb the convoy.  The results were later called “a devastating attack”. 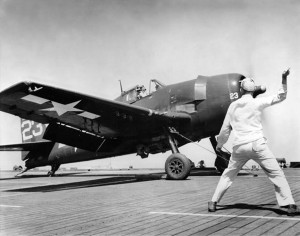 An F6F-5 Hellcat from VF-74 takes off from the deck of the USS Kasaan Bay during Operation Dragoon, August 1944. Photo Credit: US Navy

Later in the day, two more He-111s were spotted by another flight of Hellcats from VOF-1.  Both of the German bombers were shot down near the village of Vienne.  This marked the first Hellcat “kills” over France.  Shortly afterward, a third He-111 was spotted and also downed by one of the same VOF-1 pilots, Ensign Alfred R. Wood, who chalked up his second victory for the day, though the first was officially shared with his squadron mate, LT Rene E. Poucel.

In Barrett Tillman’s book, “Hellcat: The F6F in World War II”, the author describes the engagements that day in some detail.  “On a tactical recon of the Rhone River, the VOF-1 exec ran across two more Heinkels.  Lieutenant Commander John H. Sandor’s division jumped the pair of low-flying bombers heading south near Vienne.  The Heinkels split up and Lieutenant Rene E. Poucel with Ensign Alfred R. Wood flamed one from astern.  It crashed in the same region Poucel’s parents had been born.”

The author notes that Poucel was himself an American born of immigrants from southern France.  He then continues, “Sandor and Ensign David Robinson closed in on the second Heinkel at 700 feet and hit it at full deflection from starboard.  The stricken bomber crashed-landed in a field, where the two Hellcats came down low to burn it.  The surviving crew members were killed when they ran into Sandor and Robinson’s line of fire.  Continuing the reconnaissance, Ensign Wood spotted a third He-111, still south of Vienne.  He peeled off from 2,000 feet and closed in behind, setting both engines afire.  The Heinkel exploded and crashed in some woods.”

VF-74′s commander, LCDR Bass, then lead a flight that intercepted and downed a Junkers Ju-88.  As the afternoon hours ticked by, another VF-74 flight encountered a Dornier Do-217 and shot it down as well, with the victory being shared by two Navy pilots, LTJG Edwin Castanedo and ENS Charles Hullard.

Throughout Operation Dragoon, the US Navy enjoyed complete dominance over the battlefield.  Bloodied and weakened by the wider Allied progress in the war, the Luftwaffe could put up little other resistance in southern France.  The Allied advance on Marseille was rapid and the city was completely surrounded on August 21st.  On August 21, the Luftwaffe attempted to fly three Junkers Ju-52 transport planes into the beleaguered city, but these too were intercepted by the Navy’s Hellcats of VOF-1 and shot down.  Credit was given to Lt. (jg.) Edward W. Olszewski and Ens. Richard V. Yentzer.  Interestingly, Lt. (jg.) Olszewski’s Hellcat that day was the same one as previously flown by Ens. Wood when he scored his kills.  By the end of the campaign, that aircraft dutifully carried four kill markings, little Nazi swastikas that were painted under the cockpit rail.

Author Tillman describes the aerial combat and notes that the pilots “…found three Junkers 52 transports over the Rhone River.  The tri-motored Junders were apparently evacuating German VIPs from Marseille, and though both Hellcats were damaged from earlier combat, the Tulagi pilots gave chase.  Olsewski attacked from starboard on the V-formation and dropped the number three man in two passes.  With only one gun firing he then took out the other wingman. Yentzer got the lead Junkers by making three runs from 9 o’clock and sent it down burning”. 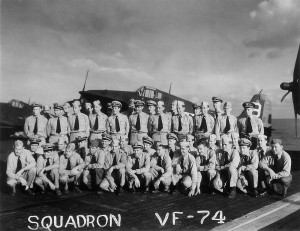 Pilots of VF-74 pose on the deck of the USS Kasaan Bay with their F6F-5 Hellcats after departing Algeria for the USA after Operation Dragoon. Photo Credit: US Navy

The campaign was not without cost.  VOF-1 and VF-74 lost 17 aircraft and seven pilots, mostly due to ground fire and operational accidents.  VF-74′s highly experienced commanding officer, LCDR Bass, a veteran of the Pacific War who had received two Distinguished Flying Crosses, was killed during a ground attack sortie on August 20.  The logbook of VF-74 recounted the loss:

“At the northernmost point of their flight, Bass’ division went low looking for targets and over Camelet, Bass suddenly pushed over steeply and at 200 feet went into a dive.  The others couldn’t see his target much but thought it to be a motorcycle.  Bass went so low on his strafing run that his belly tank hit an object on the ground and tore away, the plane pulled up to 300 ft. but never regained proper altitude.  It pulled away to port and plummeted to earth, exploding.  The only remains of Bass are his USNA ring and dogtag later found by the army in the field where he crashed.”

Despite the losses, the Navy’s Hellcats proved effective in their primary roles of air superiority as well as ground attack over France.  In the latter role, they were particularly deadly, strafing and bombing targets.  The official results reported that 825 vehicles were destroyed, 334 more were damaged.  As well, the logs reported the destruction or damage of 84 locomotives.  Eight Luftwaffe aircraft were downed in total.  After two weeks, the US Navy’s air units were withdrawn from the combat as the supporting amphibious fleet was no longer needed.

During the war in Europe, there were other carrier-based aircraft that were well-known in the Pacific War but rarely seen fighting the Germans.  The FM-2 Wildcat was a standard fixture of convoy support duties with a number of squadrons engaged.  The British also flew the Wildcat, calling it the Martlet, basing the plane out of Scotland.  They felt that the FM-2 Martlets were no match for the Luftwaffe.  Also, during Operation Torch, the invasion of North Africa, US Navy Wildcats were engaged against Vichy French fighter planes, scoring a number of kills.  After the successful invasion, the bulk of the remaining Vichy French forces there came over to fight with the Allies as part of the Free French forces, making their losses a travesty of war.


Hi, I am very pleased to have your site. In the 1970s, I found a badly damaged German 20mm flak ammunition magazine behind the Semaphore Hill at Le Dramont, France. Examining the magazine, it is easy to see it was hit on the side by a .50 cal round which then exploded the closest 20mm rounds. I have wondered recently if would be possible to find out which USAAF flight attacked this target. Having seen your website, I hope you can steer me in the right direction.


My grandfather was a Navigator on a TBF Avenger on the Kasaan Bay. Fought in the Pacific Arena 44-45
I have several photographs and memorabilia from his time there. Can’t wait to share this article with him!


I was transferred to the aircraft carrier TULAGI 12-21-43, we left Quonset Point, R I with Admiral Durgin and Squadron VOF-1. I was the Petty Officer in charge of the Plane Directors on the Flight Deck and enjoyed your “Hellcats over France”