Take one 800 hp air cooled, 9 cylinder Pratt & Whitney Wasp radial engine with 1,344 cubic inch displacement, bolt on a big propeller, and add the lightest weight, teardrop-shaped and highly streamlined fuselage behind.  Seemingly almost as an afterthought, put on a pair of stubby wings, affix the landing gear within teardrop wheel pants, and push the cockpit back as far as you can to the little rudder, enabling the pilot to see the competition when dashing in tight turns around the pylons.  This can only describe one aircraft — the Gee-Bee R racer!  Today in aviation history marks the plane’s first flight in 1932 — exactly 80 years ago! 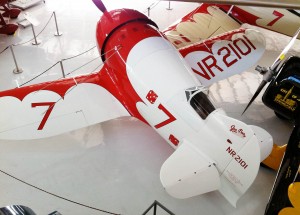 The Granville Brothers Aircraft company was an aviation design and manufacturing bureau from Springfield, Massachusetts that reached prominence in the 1930s with dramatic and innovative new aircraft that dominated the racing scene.  Vying for the Thompson Cup, the Bendix Cup, and victory in the Shell Speed Dash, the Granville Brothers designers, Zantford “Granny” Granville and Howell “Pete” Miller, met with NYU’s professor of aeronautical engineering, Alexander Klemin, at New York University for three days of intensive wind tunnel testing.  The result was something that looked like a dwarf airplane hanging on behind a huge engine.

As dangerous as it was fast, the Gee Bee R also only barely met the basics of aerodynamics.  Its tiny control surfaces, huge torque, and small wings meant that it was unstable and, if it “got sideways” on the pilot (even a little bit), it quickly became uncontrollable.  In the hands of a skilled pilot, it was magic — but even the best could lose control of the plane on a bad day. 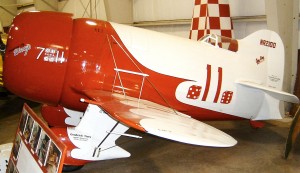 Heading into the 1932 Thompson Cup Races, the Gee Bee R-1 was to be flown by Army aviator, James Doolittle.  Already an expert racing pilot from the Schneider Cup Seaplane Races (though it is hard to believe, the seaplanes were faster than the land planes of that era!), Doolittle recognized instantly that the Gee Bee R-1 was a dicey airplane — the plane even carried artwork of a pair of dice on the side of the fuselage (two aircraft, the R-1 and R-2, were built, one with an “11″ and the other with a “7″ as the totals of the two dice).  Nonetheless, Doolittle also knew that the plane was a winner.

“She is the sweetest ship I’ve ever flown.  She is perfect in every respect and the motor is just as good as it was a week ago.  It never missed a beat and has lots of stuff in it yet.  I think this proves that the Granville brothers up in Springfield build the very best speed ships in America today.” — Jimmy Doolittle, quoted in the Springfield Union newspaper on September 6, 1932.

The Gee Bee R-1 proved to be a winning airplane, but also proved to be as dangerous as suspected by its pilots.  It went on to win the 1932 Thompson Trophy Race in the hands of Jimmy Doolittle and then set a new speed record of 296 mph in the Shell Speed Dash.  In 1933, however, its narrow flight envelope would claim the life of racing pilot Russell Boardman when the engine stalled and the plane’s wing ticked the ground as Boardman tried to wrestle it straight — it would cartwheel into twisted metal.  Rebuilt with modifications, it would get away on landing from Roy Minor, another racing pilot, although he survived.  The plane was then sold to pilot Cecil Allen who made further modifications (despite cautionary warnings from the Granville Brothers).  The result proved to be even more unstable and just after take off, the plane crashed, killing Allen.  Likewise, the other Gee Bee R aircraft would crash in 1933 — pilot Jimmy Haizlip would be lucky to escape with injuries. 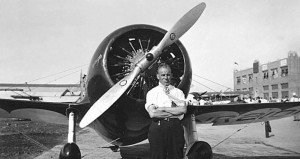 Although the Gee Bee R-1 and R-2 had a terrible record of safety, they were the darlings of the air racing circuit.  They set a new standard for speed and design and influenced countless airplanes that followed.  In fact, even the World War II P-47 Thunderbolt follows some of the Granville Brothers’ design principles — take a huge engine and big prop, and put a teardrop fuselage behind it, plus a pair of stubby wings….  Ultimately, the Gee Bee series of racing planes launched the Granville Brothers into prominence — and even to this day, the name Gee Bee brings a smile to the face of any aviator, anywhere and anytime, though most of us wouldn’t want to try flying one.

The Granville Brothers were tapped by the US Army Air Corps to submit designs for fighter aircraft at the beginning of World War II.  It was hoped that their aerodynamic talents would produce a fast pursuit fighter that could match the Luftwaffe’s Messerschmidt Bf 109s.  The Granville Brothers, however, were never able to produce a fighter despite their obvious talents.  Interestingly, many other racing designers would create designs for the war — Supermarine created the Spitfire and Macchi produced the MC-202, among other planes, these being but two leading racing design shops that were transformed into warplane manufacturers.


As a seasoned left turn flier, experienced in the Army’s impotent aspirant application of the Gee-Bee design theory, the feckless little Brewster Buffalo, an apparent personal friendship military contract award of that era, I can attest to the fact that the fat, little, over-energized, beast was a pilot’s handfull, even with much larger wings.