100 Years Ago — More Kicks and Than Ha’Pence

Well, thought Davenport, at least the Royal Aero Club is thinking straight.  He read on, “The ‘authorities,’ after the manner of those who have no friends, come in for more kicks and than ha’pence, and have doubtless learned ere now to accept their lot with equanimity.”  Well written, that, though Davenport, maybe they’ll yet awaken to the fact that aviation is the future of warfare.  Taking a sip of tea, he turned the page and read past the opening essay about England’s lack of attention to the potential future of military aviation.  Damn them for their lack of vision….

Immediately, what caught his eye was a lengthy feature about the extraordinary little monoplane from Mr. Handley Page.  Ah, thought Davenport, that is a graceful looking bird and, if memory serves, I saw it at Hendon just a month ago!  Yes, it would be perfect — and so he began reading the article in which the writer started off directly with a condemnation of the British military procurement practice:

“Among the disappointments of the Military Trials was the limited opportunity that they afforded for appreciating the proper merit of the Handley Page monoplane.  The machine entered therein was one specially built to satisfy the conditions, as the firm’s standard model, which had been flying quite well before the trials, was not suited to the requirements laid down by the tests.”

A birdlike lines of the Handley Page Monoplane.

What?  Oh no, they’ve done it now, thought Davenport, the British Army is so tied up with that biplane idea of theirs that they’ve written their aeroplane requirements to ensure that the best of Britain somehow cannot qualify!  These sorts of acquisitions practices will certainly stop over time, he considered, as no future air power can operate like that!  He flipped past the news about the British military and read more about the monoplane itself — chief among the advancements was the radical aerodynamics of the wing, which read quite technically.

“…the crescent entering edge, the reversed curvature of the trailing edge, adn the graded camber of the wing section from the shoulder to tip — are all associated with the general problem of conferring on this machine a degree of inherent stability, which is its whole object and raison d’etre.  The reversed curvature of the trailing edge introduces the principle of the fore and aft dihedral on a very short base; that is to say, while it tends to neutralise the retrogression of the centre of pressure, its lack of fore and aft length probably handicaps it in damping out any oscillation that has once commenced.” 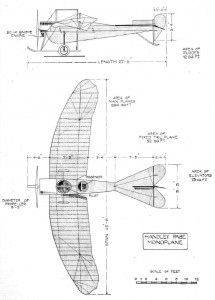 Such terms were music to Davenport’s ears.  This Handley Page fellow, he thought, very bright — do I remember him from Eton?  He flipped to the other news.  It was more military news, this time even the Roumanians were showing up Great Britain, even with British aeroplanes that their government, unlike Britain’s, had purchased! 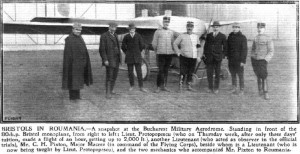 Romanian military pilots with one of their aeroplanes.

“The Roumanian Government are going ahead with the equpiment of their army aeroplanes, and their latest purchases are a number of 80-h.p. Bristol monoplanes.  On one of them the other day, Lieut. Protopopescu made a flight of upwards of an hour to the south of Bucharest, then returning to his starting point.  He had made his first flight on the machine only three days previously.

Roumania is a splendid country for aviation as it is dead level and unobstructed by trees.  The fields are, however, cut up by small dykes, so that great care has to be taken when landing or rolling and they tend to make the atmosphere disturbed at times.  Being of very plucky character and able to keep a cool head in an emergency the Roumanians make splendid flyers, and should they be drawn into the war they will doubtless make full use of the new arm.”

Quickly, Davenport flipped ahead to the other international news — there had to be something a little bit more positive there.

The Gordon-Bennett Balloon Race.
The race of the Gordon-Bennett Aeronautical Cup will take place at Stuttgart on Sunday, the 27th inst., and the Royal Aero Club will be represented by Mr. J. de Francia in the balloon “Honey Moon,” 80,000 c.f.

From the British Flying Grounds.
Monday of last week there were quite a lot of different machines flying.  Petre on the Marin-Handasyde was doing well, also Raynham on the Howard-Flanders mono.  The “Bristols” were busy as usual and the Vickers, too.  Tuesday morning, Mr. Percival, on his 35-h.p. Anzani-Caudron biplane, made an appearance after being absent for some time, and made some very decent flights.  Petre was on the Martin-Handasyde flying very gracefully, being up for 1 1/2 hours and climbing upwards of 3,000 ft.  Raynham on Flanders and other schools out as on the previous days.

A Balloon Fatality in Germany.
By an extraordinary accident Germany lost the services of one of her pilots in the Gordon-Bennett Balloon Race, which is to start from Stuttgart to-morrow, Sunday.  Accompanied by a friend (Lieut. Stichler) Lieut. Gericke, who won the Cup in America last year, started on Sunday from Bitterfeld in the balloon “Berlin II,” which was to have taken part in the forthcoming race.  They had reached Spansberg, in Saxony, when the balloon exploded, apparently owing to being struck by lightning.

Voyage by Russian Dirigible.
On October 11th, the Russian military airship “Lebed” piloted by Capt. Chabsky, made a voyage of two hours; duration, during which some tests were made with a Mitrailleuse.

An Aviette’s Success.
At the Parc des Princes Track at Paris on Saturday, the cyclist Rettich, on a bicycle temporarily fitted with a pair of wings of about 10 ft. span, succeeded in getting his bicycle in the air and over two sticks one centimetre high placed one metre apart.  He thereby won the prize of 500 francs offered by M. Bernard J. Dubos.

A Farman Hydro-Aeroplane for Japan.
Fourny was testing a Maurice Farman hydro-aeroplane, built to the order of the Japanese Government, at Buc last week.  With Capt. Unekita, a Japanese officer, and a full load on board, the machine easily fulfilled the various tests.  During the day, Capt. Unekita qualified for his pilot’s certificate. 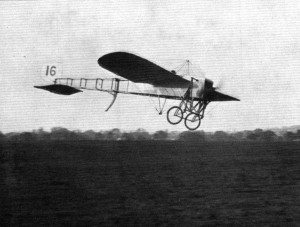 Mr. B. C. Hucks, on his Blériot, landing after making an altitude record for this year of 6,850 ft. at Hendon Aerodrome.

Davenport set aside the October 26th issue of Flight.  Even the Japanese military was getting involved in aviation.  Surely, the British Government would learn the lesson now or pay a hard price later.  Davenport would read more after another cup of tea.  He looked forward to the next issue.  A friend had let out word that it would cover the exciting world of aviation on the Indian subcontinent.