Today in aviation history, on October 17, 1922, marks a major milestone in modern US Naval air power when a plane took off from the deck of the USS Langley (CV-1).  Yet this wasn’t the Navy’s first aircraft operations from ships — Eugene Ely, a civilian on contract with the US Navy, had made the first successful take-off from a wooden bow platform on the light cruiser USS Birmingham (CL-2) on November 14, 1910, at Hampton Roads, Virginia.  After a short flight, he landed on Willoughby Spit nearby.  Two months afterward, on January 18, 1911, Ely made also the first successful landing, this time on a platform added to the cruiser USS Pennsylvania (ACR-4) at San Francisco.  Less than an hour later, he took back off again to return to his point of origin nearby at Selfridge Field.  By 1915, the Navy had tested a steam catapult when Lieut. Cmdr. Henry C. Mustin launched a flying boat off of a wooden platform mounted on the stern of USS North Carolina (ACR 12) while docked in Pensacola Bay, Florida.  Thus, though it might seem odd to mark this day instead of those, in fact, today is a very special day in Naval aviation history.

A New Era with the USS Langley (CV-1)

While the Navy had accomplished aircraft launches since around 1910 and 1911, the intervening war had slowed the development of naval aviation — whereas it had sped up the development of aviation overall on a worldwide basis.  That was about to change when, less than a year after the end of the Great War, plans were completed for the modification of a World War I era collier (coal refueling ship) named the Jupiter (AC-3).  Such a dull ship — no great capital ship with guns and armor, but rather a simple refueller, belied the fact that the Jupiter featured a major naval advance with the first electric motors for propulsion.

The Jupiter had been launched in August of 1912 and the ship had sailed the seas for seven years.  With the end of 1919 came a redesign that aimed to convert it to a flat-topped aircraft carrier, complete with an elevator to the hangar deck and a steam-catapult (later a second was added) for launching aircraft.  It was an extraordinary leap in naval aviation capabilities and planners recognized that if the ship and aircraft operations could be proven, it would be possible for the Navy to project air power anywhere in the world.

Addition of the flat-topped deck was completed and the ship was rechristened the USS Langley and put in service on May 20, 1922, under the command of Cmdr. Kenneth Whiting. After that additional modifications were made rapidly as the ship was fitted out and prepared for aircraft trials.  In April, the Navy had defined the specifications for the design of arresting gear to capture planes on landing — the planes would be fitted with a tail hook and would fly onto a deck across which a series of two of more hydraulically braked wires would be strung.  Catapults were specified — one at the bow and one at the stern of the ship to permit launch operations in both directions simultaneously. 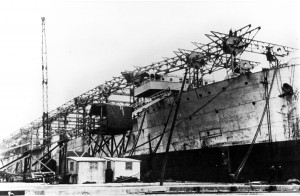 The USS Langley (CV-1) under conversion from a collier to an aircraft carrier at Norfolk Naval Shipyard (Virginia, USA) in May 1921. Photo Credit: US Navy

The Congress was so pleased with the progress shown that in July 1922, it authorized the conversion of two unfinished battle cruisers, the Lexington and Saratoga, into aircraft carriers.  Those ships were still years in the future, however, and the Navy had to prove that its aircraft carrier concept would work — thus, the USS Langley was then prepared for aircraft trials in October 1922. 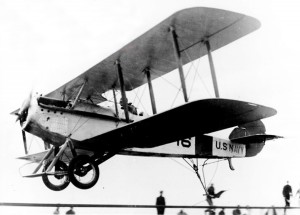 A Vought VE-7SF, like the one that made the first landing on the USS Langley in 1922. Photo Credit: US Navy

The first aircraft placed onto the ship were land planes (naturally).  Very little was yet understood from a design perspective about the needs for special modifications to enable air operations from a moving carrier deck.  The planes were hoisted aboard in the harbor at Norfolk, Virginia, as it was in the York River where the flight trials were to commence.  The type selected was an American design from the Great War called the Vought VE-7SF, which looked a bit like a variant of the Fokker D.VII married with a French-built SPAD XIII.  In addition, the Navy designated that landing trials would begin with another biplane type, the Aeromarine 39-B.

The aircraft were fitted with tail hooks for use on the aircraft carrier during landing.  Finally, on October 17, 1922, the ship and its crew were ready.  Lieut. V.C. Griffin climbed into his VE-7SF and the plane was taxied to the end of the deck.  Essentially, he planned a normal take-off, as if the ship was simply an airfield.  The VE-7SF was not connected to the catapult — that test would come a month later.  With the engine running, Griffin prepared and with a signal, he pushed the power forward, rolled ahead and took off into the air with deck ahead to spare.  It was a complete success — and Lt. Griffin landed back ashore celebrating the first successful launch of an airplane off of a truly modern, purpose-built aircraft carrier. 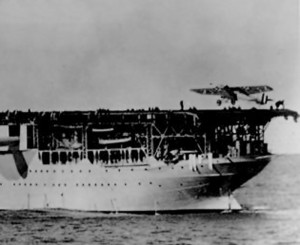 Landing on the USS Langley. Photo Credit: US Navy

Just days later, on October 26, in accordance with the flight test plan, the Aeromarine 39-B at the hands of Lieut. Cmdr. Godfrey DeCourcelles Chevalier made a first landing.  To ensure a slower closing speed, the USS Langley was placed underway and the plane approached from the stern.  He made a perfect “trap”, in modern parlance, clearing the rear of the deck and catching the wires exactly as planned. 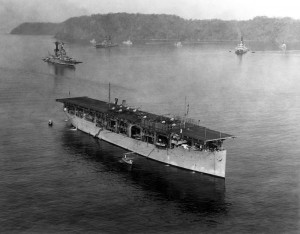 The USS Langley in harbor with its deck holding a squadron of VE-7SF aircraft. Photo Credit: US Navy

The remaining task was to test the catapult system — with that accomplished, all of the features of a modern aircraft carrier would be tested and proven.  For that task, the ship was placed at anchor in the York River on November 18.  The commanding officer himself, Cmdr. Kenneth Whiting, took a PT seaplane and had it connected to the catapult.  Running up the engine, on a signal, the catapult was fired and Cmdr. Whiting made a perfect take-off. 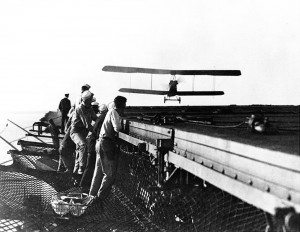 Landing practice on the USS Langley, October 1922 in an Aeromarine 39-B. Photo Credit: US Navy

Thus, what made 1922 a special year for Naval aviation was that the first dedicated, flat-topped aircraft carrier was christened and flight operations were proven, including take-offs and landings with arresting gear and a catapult system.  As well, an elevator system to a hangar deck was tested and proven.  By the 1923, VF-2 would deploy onto the USS Langley and begin a long, uninterrupted period of modern aircraft carrier use in the US Navy.

The world would never be the same. 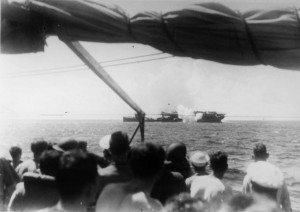 Photo of a near miss of a Japanese bomb dropped on the U.S. seaplane tender USS Langley (redesignated as AV-3) off Java, Netherlands East Indies, on 27 February 1942. The former first U.S. Navy aircraft carrier was sunk that day. Photo Credit: National Museum of Naval Aviation

The USS Langley would go on to serve in World War II, though converted to a seaplane tender.  In that war, aircraft carriers truly proved their worth and demonstrated that the era of battleship dominance was over.  Sadly, the USS Langley would be severely damaged in 1942 by a Japanese Naval air attack when nine Aichi D3A1 “Val” dive bombers achieved five hits that killed 16 men and mortally crippled the ship.  With a flooded engine room and unable to make port, the US Navy abandoned the ship.  Its escorts then finished the job by firing torpedoes into her side so that the Japanese would not be able to capture it for repairs.  The ship rests at the bottom of the sea 75 miles south of  south of Tjilatjap, Java.

Naval aviators (and aviators from the Air Force too) have a long tradition of personal call signs, a concept first popularized to the general public with the movie Top Gun, when Iceman and Maverick flew F-14 Tomcats.  Who was the first Naval aviator on record to carry a nickname/call sign and what was it?


How many tailhook Naval Aviators since the beginning 100 years ago?