The Wright Flyer B was the same model that Charles, le Compte de Lambert, had used in July for his race to be the first to cross of the English Channel.  Louis Blériot had made it first, as both had waited for the weather to break and Blériot had awoken before dawn and departed before the Compte de Lambert had gotten his breakfast (as it was the Compte’s planes were still being repair after a slight mishaps).  Yet now, the Compte aimed to show his own mettle — he set his sights on the Eiffel Tower, the very symbol of France and modern world. 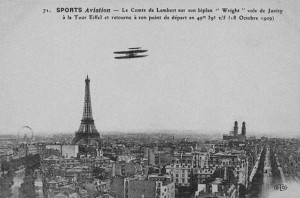 After orbiting the Eiffel Tower, the Compte de Lambert flies back toward Juvisy, 15 miles distant. Photo Credit: Library of Congress

His plan was simple, he would take off from Juvisy and fly to the Eiffel Tower, orbit it once, and return to land.  Wilbur Wright himself was on hand to observe his star pupil attempt the flight.  It was to be a defining moment in the life of a man who had taken his first flight lesson almost exactly a year before, a 12 minute jaunt at the Wrights’ famous demonstration at Le Mans. 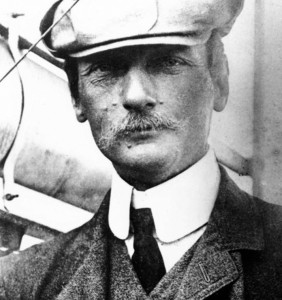 Like many of France’s aristocratic classes, Charles, le Compte de Lambert had a rich heritage.  Even his name was long, honoring many of his ancestors — here was a man formally known as Charles Alexandre Maurice Joseph Marie Jules Stanislas Jacques, le Compte de Lambert. At 43 years of age, he was a steady and respected man.  Money was no object, even if his wealth had faded considerably over the previous decade.  Indeed, where others had but one plane or a machine that they shared with one or two others, le Compte de Lambert owned two — both Wright Model B Flyers, No. 2 and No. 18.  That way, if one of the machines was suffering with maintenance problems, he could take the other up instead. 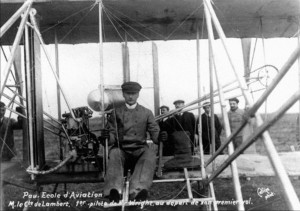 The wealthy aristocrat, le Compte de Lambert, had his very first flight at Pau with the Wrights documented — here, he is about to take off.

Earlier, he had purchased one of Lilienthal’s gliders, which he attempted to launch with the aid of a small mountain of fireworks that served as primitive rockets — an accident nearly injured his wife, Mme. de Lambert, whose dressed was holed and singed when the fireworks adjacent to where she was standing were ignited by errant sparks from the machine and went off all at once.  After some more successful experimentation, having found the art of gliding to be very limited, he instead let the Lilienthal glider age gracefully in a garage while he focused more of his interests on boating, including some commercial ventures.

Nonetheless, the call of the air was never too far from his mind.  At Le Mans, he became one of the first pupils of Wilbur Wright.  He had soloed on November 17, 1908, in the late autumn and its dodgy weather.  Three student pilots went to Pau to continue, the Compte de Lambert, the balloonist Paul Tissandier, and a French military sponsored aviator, Captain Paul-Nicolas Lucas-Girardville. 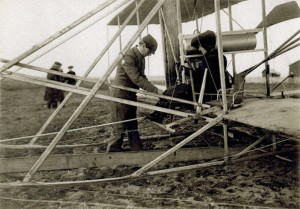 The Comptesse de Lambert sits in a Wright machine as she prepares to make her first flight aloft at Pau, February 15, 1909.

In February, he invited his wife to come to Pau to see his progress.  She arrived with Katherine and Orville Wright by train (a train accident caused something of a delay, but as it happened, they came out alright).  For two weeks at Pau, Madame de Lambert watched as others went aloft.  Finally, on her last day, Wilbur Wright himself took her up in his Wright machine.  Years later, she recorded her experiences with the words:

“In those early days, the start was off the rails and, when we came to the end of them, I felt suddenly as if I were a bird, for whom some kind of fairy had opened the door of the cage.  Softly we flew away up over those beautiful fields, toward the rose-tinted mountains.  I was, it seemed, free at last, and to be one with the exquisite beauty of the world; this seemed quite natural, all else seemed left behind.  I turned to Wilbur to say how glorious!  But my voice was drowned by the motor, which only then I seemed to realize.  For a few moments I watched Wilbur’s strong, noble face, so clear in the red sunset, and thought he was worth of having succeeded in this grand thing!  Ah!, the beautiful, graceful, easy turns, and then I felt something firm, and looking down I saw it was the road we had passed over (air pocket), and our return.  People and things were getting larger and in a few moments we came gently to rest near the place we had started from.  I felt sad tears were near, and words seemed impossible.”

By July, he was at Wissant preparing for a flight across the English Channel.  Once beaten by Blériot, he retired to consider his next moves. 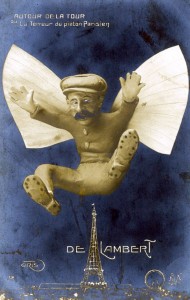 At 4:36 pm, he departed Juvisy in one of his two airplanes, which it was is not known.  Once aloft, navigating the route was easy — all the Compte de Lambert needed to do was point toward Paris and, once the Eiffel Tower loomed into view in the distance, point his plane there.  One should recall that at that time, navigational instruments and skills were so poorly developed that one usually reconnoitered the route by car first before flying it.  As he flew toward Paris, he slowly climbed for altitude.  By the time he reached the Eiffel Tower, he was approximately 300 feet higher than the top of the highest radio mast — an important feature as the Eiffel Tower was originally built to serve as a radio broadcast tower, if an extravagant one that celebrated France’s industrial strength.  This put him at a near record-setting altitude of perhaps 1,300 or 1,400 feet.

After orbiting the Eiffel Tower once, le Compte de Lambert steered his Wright biplane back the way he came, carefully picking out the same landmarks he had just overflown on the way there just minutes before.  Once in the vicinity of Juvisy, the area was familiar as he had flown there on many practice flights.  He had no trouble picking out the landing field.  At 5:25 pm, he executed a perfect landing.  Le Compte de Lambert hopped down and into celebrity status as an aviator.  Along the way, he had averaged about 36 mph.

The flight around the Eiffel Tower took just 49 minutes and made Le Compte de Lambert a worldwide celebrity.  A telegram cable from Paris carried the news to America and even made headlines in the New York Times: 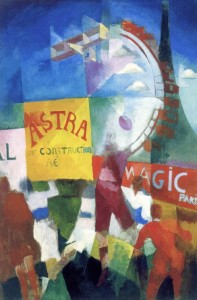 A cubist painting of Frenchman Robert Delaunay celebrates le Compte’s turn about the Eiffel Tower and highlighting ASTRA, a firm that improperly took on the Wrights’ business and was later sued for 30,000 Francs by the Compte de Lambert (he won the lawsuit).

Indeed, when he was bested by Blériot across the English Channel, he had said that it wasn’t the Daily Mail’s £1,000 prize that had motivated him — after all, he was a landed aristocrat, even if a somewhat poor one — but even if a quiet, soft-spoken man, had rather the attraction of having achieved at least some fame as a pilot in the new age of the aeroplane.  Now, with his flight around the Eiffel Tower, he had achieved his goal.

The New York Times would confirm his new global reputation with the following quip:

PARIS, Oct. 18. — The most remarkable cross-country flight ever accomplished in an aeroplane was made this afternoon by Count de Lambert. He left the Juvisy Aerodrome at 4:36 o’clock in a Wright machine, flew across Paris to the Eiffel Tower, circled it, and returned to his starting point, arriving safely at 5:25.

It wasn’t long, however, that the newspapers carried a quote claimed to be from Wilbur Wright, who was by then back in Ohio, that the Compte de Lambert was insane to circled the Eiffel Tower.  Upset, Madame de Lambert wrote a telegram to confirm the truth of the matter: 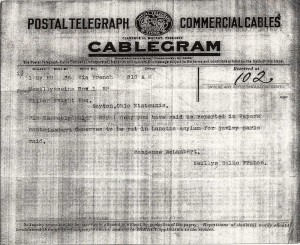 Whether Wilbur Wright had ever said such a thing, though it seems doubtful given the Wright’s own high publicity flights orbiting landmarks, is quite doubtful.  In any case, it did nothing to mar the Compte de Lambert’s true success in the matter.

Like Louis Blériot, Charles, Compte de Lambert, had made “A Most Glorious Flight”.

The Wright Brothers departed France soon after the Compte de Lambert’s famous flight.  Even with the advertising coup that the flight had been, orders for the Wright B machines were plummeting.  It was clear that the older Wright design had fallen behind the newer French types, particularly the Nieuport machines.  The French military had rebuffed the Wright machine despite repetitive marketing efforts and would ultimately settle on other French-designed types to outfit its military.  Although the market for some machines to private buyers was still there, it was quickly drying up.  The Wrights instead proceeded with the US Army’s Signal Corps, where they were successful in achieving a number of orders.

What do the Compte de Lambert and the Florida Everglades have in common?