VF-111, known as “The Sundowners”, was deployed off the coast of Korea.  It was late 1950 and the Korean War had turned finally to the favor of the UN forces.  In the previous eight weeks, the tide had turned with the landings at Inchon and then the breakout from the Pusan Perimeter.  The beleaguered North Korean forces had retreated nearly all the way to the Chinese border.  Both USAF and US Navy air power strafed and bombed the enemy relentlessly.  In response, the Soviet Union entered the fray and deployed a regiment of MiG-15 jet fighters at the Chinese airbase at Antung, Manchuria.  The MiGs first entered combat on November 1, 1950, with an inconclusive engagement against a group of F-51 Mustangs.  On November 8, 1950, a USAF pilot, 1Lt Russell Brown, claimed a MiG-15 after a diving air battle in his F-80 Shooting Star — later Russian records would reveal that the MiG, likely flown by Soviet Senior Lieutenant Kharitonov, actually had escaped.  On November 9, 1950, today in aviation history, it was the Navy’s turn to tangle with the new Russian jets — and the outcome would go down in history. 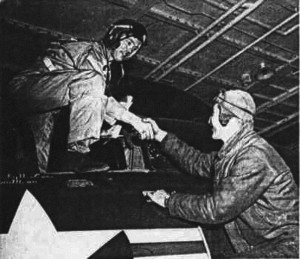 Lt. Cmdr. William T. Amen, USN, climbs out of his F9F-2B Panther after scoring his victory against the MiG-15. Photo Credit: US Navy

Lt. Cmdr. William T. “Bill” Amen was leading his flight of F9F-2B Panthers from VF-111, having flown off of the aircraft carrier, USS Philippine Sea (CV-47).  The flight was a joint operation with another similar flight of Panthers from VF-51, flying off of the USS Valley Forge (CV-45).  Together, they were defending a bombing mission against the Sinuiju Bridge that was being carried out by a group of F4U Corsairs.  As the flight flew inbound toward the target, five MiG-15s closed rapidly — it was an important intercept since Antung was just across the border from Sinuiju.  Lt. Cmdr. Amen issued the order to his flight to intercept and they turned toward the MiG-15s, into a head-on pass before they could reach the F4U Corsairs and AD-4 Skyraiders.  The flights were low, under a layer of thick and high cloud.

“I was coming head on at one of them and he didn’t even try to get in a shot.”  Lt. Cmdr. Amen would later recount.  “When I got on his tail he tried to evade but he wasn’t very sharp.”  As it was, the MiG-15 pilot was probably attempting to flee from the combat.  Amen had done a half loop and then cut the angle inside the MiG’s wider turn — his altitude went from 4,000 feet to a high of 15,000 feet as he came over the top.  Immediately, he reacquired the target and descended onto the MiG’s tail, rapidly coming back down to around 4,000 feet as the MiG made a hard combat turn at 3,000 feet.  Lt. Cmdr. Amen closed the distance rapidly by cutting to the inside of the turn and lined up for a shot, using the excellent maneuverability of the F9F Panther to his advantage.

A pair of F9F-2B Panthers, of the exact type flown by Lt. Cmdr. Amen in the engagement — in this case with the sister squadron, VF-51. In the lead plane is Lt(jg) Ernie Russell; his wing man, undergoing jet transition prior to promotion to Ensign, is a young US Navy Midshipman with a big future ahead of him — Neal Armstrong, circa February 1950. Photo Credit: US Navy

Lt. Cmdr. Amen’s aim was right on target and the MiG displayed wing hits from the quick bursts of fire.  As Lt. Cmdr. Amen watched, the MiG rolled inverted and dove toward the ground.  It seemed an impossible situation, starting an inverted dive from an altitude of just 3,000 feet.  Lt. Cmdr. Amen followed him down as best he could.  Later, he commented, “He was either pyscho or could not leave the aircraft.” Finally, Amen broke off and pulled out at just 200 feet of altitude.

As he pitched back upward, he scanned the ground but could not see the point of impact.  His wing man, however, had spotted the plane as it augured in.  The other four MiG-15s, realizing that they were unable to get to the bombers, broke off and ascended into the cloud cover before escaping northward and back to Antung, Manchuria.  The flight continued its escort mission to cover the strike by F4U Corsairs and AD-4 Skyraiders against the Sinuiju Bridge.

After the combat, the flight returned to the USS Philippine Sea and recovered safely.  The other escorting aircraft from VF-51 recovered to the USS Valley Forge (CV-45).  None of the F4U Corsairs were hit and the bombing mission was considered a success. 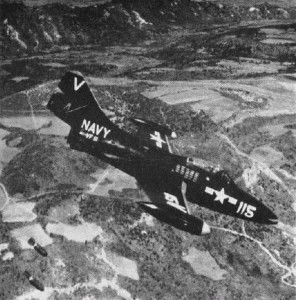 An F9F-2B Panther with VF-111, the Sundowners, one of the planes in Lt. Cmdr. Amen’s squadron; in this image flying a bombing run over North Korea in 1952. Photo Credit: US Navy

After landing, the commander of the VF-51 “The Screaming Eagles”, Comdr. Albert D. Pollack, received some joking from the other members of his flight, who told him that he had called the five MiG-15s in a way that betrayed his nervousness — so they asked him “…why did you report 20,000 MiGs coming in at five feet?”

As for Lt. Cmdr. Bill Amen, he was far from an unskilled aviator — he was a WWII era Naval pilot with an Air Medal and three stars.  At the end of his tour, Lt. Cmdr. Amen had flown 35 combat missions over Korea during the hardest days of 1950.  He rotated back to the US and was awarded the Distinguished Flying Cross for his effort.  Even if the MiG-15 would be Lt. Cmdr. Amen’s only kill, he had shown that the Soviet designed MiG-15s were far from invincible.  Their performance might be a mystery, but the engagement proved that the better trained American pilots were likely to the key to the air battle over Korea. 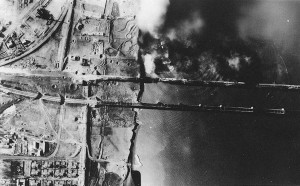 A Skyraider on one of the early November 1950 bombing attacks on the bridges across the Yalu River at Sinuiju — possibly even the mission on November 9. Photo Credit: US Navy

The name of the Soviet pilot who was killed when Lt. Cmdr. Amen shot down the MiG-15 that day was Captain Mikhail Fedorovich Grachev.  Russian records on the matter tell the story slightly differently — as follows:

At 1000 hours, a “seven” led by Captain Grachev of the 139th GIAP received a message from the Antung VPU ((air command post)) which ordered them to begin a search faor the enemy. At 5,000 meters, the MiGs headed towards the bridges. After a minute, our pilots spotted the group, which was mistakenly identified as F-47 strike aircraft escorted by F-80s. In actuality, the aircraft were naval Skyraiders, Corsairs, and Panthers.

Around two kilometers ahead of the MiGs, two flights of Panthers popped out of the clouds and immediately headed on an intercept course with the MiGs. Two thousand meters below, the strike force – around 20 Skyraiders – began to dive on the bridge one after the other and drop their bombs. Captain Grachev made the decision to attack those aircraft as they were “recovering” from bombing the bridges. The MiGs went into a dive after the Skyraiders. The decision by the flight leader was not the best one he could have made – for it left the Panthers in an ideal attack position, above and behind them. The difficulty in which the pilots of the 139th found themselves, compounded by their poor formation flying – during a recent formation with the 28th IAD where they were attached to the 67th IAP, many of their flights and pairs became separated, and were not able to regain their formations. As a result the group led by Captain Grachev broke apart and conducted their fights in pairs and by single aircraft.

Flying into dense cloud cover, which obscured Antung and Sinuiju up to a height of 4,000 meters, the pilots found their visibility was cut off in the rear hemisphere, but the main problem the pilots found was the haze which limited horizontal visibility to less than two kilometers. From the very first minutes of the battle, a nearly mystical law took over: as is correct, as the dark muck swallowed up their aircraft, it turned up the feeling the enemy was there. But there was no one who could be seen in front of them. It was even worse behind them. Then, in the best case, you could see to turn away from the line of fire. In the worst case, there was nothing which could be done – for their fate was in someone else’s hands…

When Grachev and his wingmen, Captain Bochkov and Senior Lieutenant Stulov, began to make a left combat turn to bring them around for a headon attack on the Skyraiders, out of the haze surrounding the sun came a flight of Panthers who got on the tail of Grachev and Bochkov. Stulov managed to break away from a Panther attack, and he managed to turn around and get on the enemy’s tail. But when he attempted to close, the enemy had already dodged back into the muck. Captain Bochkov also lost sight of his leader – Grachev, who, having completed more than half of his planned combat turn, suddenly flipped his aircraft back into a sharp right bank and, continuing a half-turn, dodged into the clouds. Bochkov was not able to repeat the maneuver that his commander made, and he was left with nothing else to do other than complete his combat turn.

As a result of the ultimate battle with the escort fighters, Lieutenant Komonayev and Senior Lieutenants Sannikov and Stulov claimed one F-80 shot down, but the American side states they suffered no losses on 9 November. Captain Mikhail Fedorovich Grachev did not return to base after this fight.