The Lavochkin La-176 was a competitive Soviet jet fighter prototype that competed against the MiG-15 for selection as the Soviet Union’s premiere jet fighter of the upcoming 1950s.  Yet while the MiG-15 was easier and cheaper to build, the La-176 was actually a more sophisticated bit of engineering.  As a result, not long after Chuck Yeager’s first supersonic flight in the Bell X-1 “Glamorous Glennis”, it was in this aircraft that the Soviets themselves managed to break Mach 1.0 — yet even that feat wouldn’t be enough for the Aviakonstruktora SA Lavochkina company to get the upper hand in the subsequent contract for aircraft — and as a result, the MiG-15 would go on to become the foundation of the next 40 years of Soviet air power.

Prior to the development of the La-176, the Soviet Union had made a few abortive attempts to break the speed of sound.  Given the relatively less technically advanced nature of Soviet aeronautical engineering and manufacturing capabilities at the time, however, their attempts were instead undertaken with captured Nazi and US equipment.  This was a somewhat bizarre match-up that proved ill-suited to the challenge at hand and resulted in a rather serious crash. 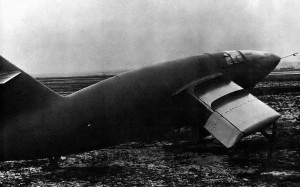 At the end of World War II, the Soviets captured and exported a Nazi rocket-powered reconnaissance aircraft, the DFS 346.  The aircraft was designed to be carried aloft underneath another airplane and air-dropped, whereupon its pilot would ignite the rockets and accelerate to near Mach 1 speeds.  This plane had been designed by the German DFS Institute for Sailplane Flight — it was revolutionary and pioneered swept back wings with wing fences for greater stability.  When the company’s Siebel factory was captured, the Soviets were quick to export what they could back into Russia for evaluation.  Once in Russia, the Nazi rocket plane was renamed “Samolyot 346” (Aircraft 346), not much of a change from the original designation. 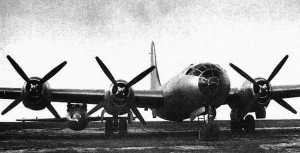 Captured American B-29 Superfortress with a DFS 346 mounted under the right wing.

Lacking a suitable launch aircraft, the DFS 346 was mounted under a captured USAAF B-29 Superfortress (one of those that had diverted to the Soviet Union after suffering damage during bombing raids on Japan).  It was hung under the right wing and taken aloft for trials.  Attempts to break the speed of sound with the DFS 346 unsuccessful, however, and at least one crashed seriously.  None of the flights managed to exceed Mach 1.0.

The captured B-29, in Soviet markings, taxis out for take off with the DFS 346 under its wing.

Finally, the Soviets would achieve success, yet not in an experimental supersonic research aircraft.  Instead, the sound barrier was broken while testing a new fighter plane design in competition against the Mikoyan and Yak Design Bureuas.  The feat was achieved more than a year after Chuck Yeager’s famous flight at Muroc (now Edwards AFB).  With the Lavochkin La-176, test pilot Colonel Ivan E. Fyodorov took to the air in mid-December 1948, and was able to fly the aircraft to Mach 1.0 — this was after more than 100 previous flights that slowly tested the airframe and steadily increased speeds.

Despite the success, however, the Soviet engineers did not trust the instrumentation in the aircraft.  They couldn’t be confident that the speed had been achieved and that the plane and pilot had actually broken the sound barrier.  Thus, they decided on a series of tests to replicate the Mach 1.0+ speed, using better instrumentation.  The next flight would be by another test pilot, Captain Oleg Sokolov (sometimes referred to as Oleh Sokolovsky). 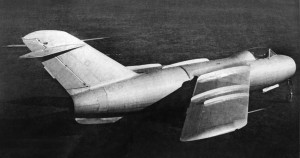 This time, with the new instrumentation — a special pitot tube for airspeed measurement in supersonic ranges — the engineers were finally satisfied that Capt. Sokolov had done it.  This also confirmed that Col. Fyodorov had also done it, and thus, he became the Soviet equivalent of Chuck Yeager.  To gain the maximum knowledge from the experiments, the Soviets repeated the experiment a total of six times before the end of the year (another four flights).

The La-176’s triumph, however, did not result in additional orders of Lavochkin’s aircraft, despite its superior performance and unbelievable armament — two 23 mm and one 37 mm cannon.  Instead, the Soviet military just pressured Mikoyan Design Bureau to achieve better than Mach 1 speeds with its MiG-15, which it was able to obtain by the end of 1949.  The Lavochkin Design Bureau went on to develop later aircraft with even better characteristics, yet these too never unseated the Soviet Air Force from its addiction to the MiG production line for its premiere jet fighters for the next four decades, culminating in the MiG-29 at the end of the Soviet period of Russian history.

In later years, test pilot Col. Ivan E. Fyodorov recalled the La-176 with affection.  Commenting on its relative performance as compared with the MiG-15, he stated, “The 176 flew as well as the MiG-15.  It was easy to operate, stable and could carry powerful weaponry.  It was also 500 kg lighter!  But as they say in aviation, it just never made it into the mainstream somehow.”

Too often, the greatest achievements of aviation are reduced to mere numbers — it is often that way with the first Mach 1 flights.  Thus, it is worth quoting the original Russian sources regarding the feeling of the plane as it broke the speed of sound:  “From a great height, the pilot accelerates the La-176.  You can hear a tedious low whistle that increases with speed.  The plane is hurtling toward the ground.  The plane begins to shake as if it has caught a fever.  And then — silence!  That is what it is when breaking the sound barrier.”

What became of the La-176 and the first two pilots who first broke the sound barrier in the Soviet Union?