At 20:37 on December 28, 1968, a flight of six Aerospatiale SA 321 Super Frelon helicopters  loaded with special forces commandos with seven escorting Bell helicopters as escort took off from the Israeli airfield at Ramat David, located southeast of Haifa and made their way northward.  Earlier, two Israeli Navy torpedo boats and four Saar class missile boats had raced up the Lebanese coast, keeping 25 km offshore until they were in position to assist in an evacuation.  An “air head” refueling point was established in northern Israel at Betzet Airport to support any helicopters that were running low on fuel. 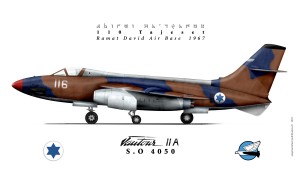 Profile of an IAF Vautour in colors from the 1967 period. Illustration by Stephan L. Hernault

As the helicopters rendezvous’ed 12 km off the Lebanese coast offshore from Rosh Hanikra before making the dash east into Lebanon, two A-4 Skyhawks and four Vautour fighter-bombers took off to provide air support if needed.  In addition, two Nord aircraft took off to orbit to help with the evacuation after the mission.  A relief force of 36 commandos was loaded and held on standby at Ramat David in case a rescue was needed.  Finally, a Boeing 707 was positioned in the north of Israel at high altitude to provide VHF/UHF radio relay.  In short, the entire operation was planned in detail.

The target for the night was Beirut International Airport.  The mission was to destroy all of the Arab commercial airliners that were parked on the ramp in retaliation for Lebanon allowing the Palestinian terrorist group PFLP to base in Beirut. 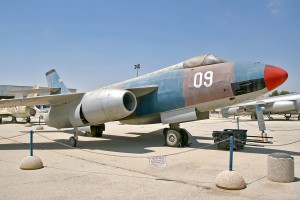 The Reason for the Mission

On July 22, 1968, terrorists of the People’s Front for the Liberation of Palestine (PFLP) successfully hijacked an Israeli commercial airliner of El Al on its regularly scheduled flight from Israel to Rome, Italy.  The terrorists had forced the pilot to divert to Algiers, where a tense situation followed and the passengers were held hostage for 39 days before being released.

Immediately, the Israeli Defense Forces (IDF) began planning a reprisal raid.  A key consideration was that the Palestinian terrorist movements were all centered in Lebanon at the time — and the Lebanese government was doing nothing about it.  Therefore, the Israelis thought to hijack several Arab airliners as a measured, if disproportionate response.  In the subsequent planning process, however, it was realized that undertaking a hijacking of their own created serious moral and ethical problems for the country — a nation-state taking hostages? — and the decision was made to instead destroy as many airliners as possible on the ground without causing any casualties to flight crews, ground personnel or passengers. 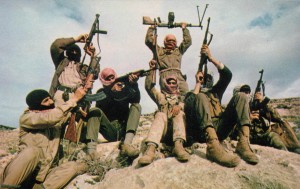 In the mountains east of the Jordan River, a patrol from the Popular Front for the Liberation of Palestine punctuates a battle hymn with Soviet, Czech (VZ58), and (top left) Egyptian weapons in early 1969. Photo Credit: Thomas R. Koeniges, in LOOK Magazine, May 13, 1969. p.27

On December 26, 1968, as the planning was finalized, two PFLP terrorists flew into Athens from Beirut and attacked an El Al airliner while it was on running up its engines before take off.  The plane was loaded with 41 passengers.  Israeli security forces on the scene were able to intervene, subdue and capture the terrorists — the security team moved so fast that a far greater catastrophe was averted.  Before the capture, however, the terrorists killed one passenger, wounded a flight attendant and caused damage to the airliner, destroying one of the engines and setting the plane on fire.  The terrorists were turned over to Greek authorities.  As a result, the reprisal attack was approved for immediate execution.  Just 36 hours later, the mission was on — it would be code-named “Tshura”, or “Gift” if translated to English. 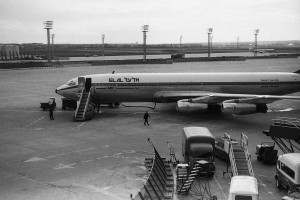 On December 28, 1968 — today in aviation history — the Israelis launched Operation Gift.  The flight time to Beirut was just 45 minutes for the Super Frelons and 53 minutes for the Bell helicopters.  Arriving at Beirut International Airport, the IDF special forces troops of the Sayeret Matkal landed in three groups — Uzi Force, Digli Force and Negbi Force (named after the respective ground commanders of each force).

As the raid began, one of the Bell helicopters landed near the terminal to serve as the command and coordination element — the raid’s overall commander, Rafael Eitan, ran the operation from there.  Additionally, to mask the commandos’ movements from observers in the tower and terminal area, a second Bell helicopter made a rapid pass across the front of the buildings, dropping 20 smoke flares and 95 smoke grenades to obscure the view.  The pilot, Lt. Col. Eliezer “Cheetah” Cohen, then turned to orbit and provide support and observation to detect if any Lebanese military forces attempted to reinforce the airport.

IAF Super Frelon helicopters, the type used to transport the commandos of the Sayeret Matkal to Beirut International Airport, shown in another operation over Egypt during 1968. Source: IAF

Uzi Force, with 22 men, landed at the north edge of Beirut’s western runway, where they found three groups of parked airliners — one with five planes, one with two or three planes and the third with three planes.  The commandos quickly wired the third group of planes with explosives and detonated them.  Thereafter, they fanned out to provide a security perimeter while the demolition team wired charges to the nose wheel and main gear of the other aircraft, detonating each carefully to avoid collateral damage.  Noting that the Lebanese military side of the airport had extinguished its lights, the commandos decided to avoid a confrontation with a possibly prepared military force and quickly proceeded south to the pick-up point, which was located at the crossing of the two runways, a location code-named “London”. 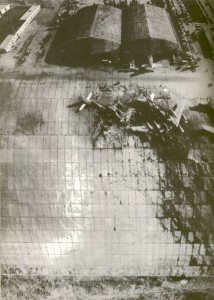 The aftermath of the Operation Gift, as seen through the fish-eye lens of an IAF reconnaissance camera. Source: IAF

Digli Force, with 20 men, landed to the south and moved quickly northward, securing a perimeter and isolating the airport’s emergency services building.  Intelligence data had revealed that approximately 60 security guards with handguns were located on the airport.  From there, the group located four airliners, three positively identified as Arab ownership.  They were wired two planes with explosives and destroyed both.  At that point, the group began to receive sporadic small arms fire from the terminal building through the smoke screen that was still in place.  This was likely pistol-fire from the airport security officers.  The commandos fired warning shots near the building with their heavy weapons.  Clearly outgunned, the security personnel ceased fire.  Then they wired and destroyed the third plane before moving to “London” to join with the others for evacuation. 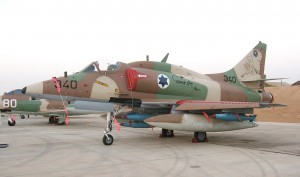 An A-4 Skyhawk of the IAF; this aircraft type was new to the IAF at the time, having only been introduced in the months before the raid. Photo Credit: Oren Rozen

Negbi Force was comprised of 22 men.  It landed and moved to the airport’s east ramp.  There they found multiple airliners, including some that were not from Arab countries.  Carefully selecting three planes on the ramp that were Arab, they wired them with explosives and destroyed them.  A fourth plane was located in a nearby hangar, which was also wired.  After the group in the hangar observed that the others planes had been destroyed, they triggered their explosives as well.  Withdrawing toward “London”, the force came across the airport’s fuel depot — permission to destroy it was denied, however, and they moved on to evacuate.

During the attack, a military truck was seen approaching the airport gate — warning shots were fired and it declined to continue its approach.  Other vehicles fleeing the airport created a traffic jam at the gate, blocking further entrance.  After just a half hour, all of the commando forces assembled at “London”, where the two main runways crossed.  On call, the Super Frelon helicopters returned to pick them up.  After a rapid head count, all three teams as well as the command element got off safely and returned to Israel. 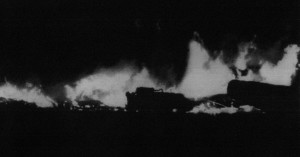 In the immediate aftermath of the raid, burning airliners light up the night sky at the airport in Beirut.

A Masterwork of Planning and Execution

In the end, the operation came off nearly flawlessly.  Israeli Naval commandos had moved in rubber rafts to within 1,500 meters of the beach at an alternate evacuation point in the event that the airport couldn’t be secured for evacuation.  The Nord aircraft as the secondary evacuation plan had orbited and never were needed.  The Skyhawks and Vautours orbited higher above and were never called on to participate and suppress any serious military intervention.  Not a single casualty was suffered on either the attacking force or among the Lebanese at the airport.

As a reprisal for Lebanon’s acceptance of terrorist bases and operations from its territory, the country had paid a very high price.  In all, fourteen airliners were destroyed — two Boeing 707s, three Comet C-4 airliners, a Caravel, a VC-10 and a collection of Vickers Viscounts.  All belonged to the Lebanese airlines, Middle East Airlines (MEA), Air Libea (Lebanese International Airways) and Trans-Mediterranean Airlines. 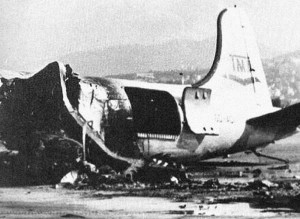 Wreckage on the airport ramp in the daylight aftermath of the raid.

The financial damage in equipment alone was estimated at between $42 million and $44 million (in 1968 value!) plus an undetermined financial loss that resulted from the loss of passenger revenues.  For Air Libea, it was the end — unable to recover financially, they went bankrupt.  For MEA, they survived, but Lebanon’s commercial aviation sector was set back decades.

It was, in the end, Israel’s reminder to the world that any country supporting terrorists would pay the price.  Even today, however, it is a message that both terrorist groups and governments that support them have somehow always failed to heed. 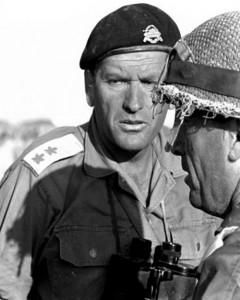 Rafael Eitan, commander of Operation Gift, as seen during the 1967, Six Day War.

As the raid was winding down, there is a story that is widely known among the Israeli special forces regarding their commander, Rafael Eitan (known commonly as “Raful”, later he became head of the IDF, a position he held during the 1982 Lebanon War).  As the story goes, when the small arms fire ceased coming from the terminal building, Eitan walked inside to assess the situation.  Seeing disorder and no security guards, he walked over to a coffee shop, ordered a coffee, drank it quickly and left a tip in Israeli shekels on the counter before proceeding to the evacuation point.

While such stories may sound unbelievable to the modern reader, one must keep in mind that this was 1968, the Israelis were confident and feeling invincible after the 1967 war — a complete rout for the Arab forces.  Did it happen?  Well, maybe.  Maybe we should ask an Israeli commando for confirmation….  Anyone?

The popularly known, European/American names for the A-4 Skyhawks and Super Frelon helicopters have been used in this story.  What are the Israel Air Force’s names for these aircraft?


The A-4 is called the “Ayit”, which might be translated as “Eagle.” The Super Frelon is called “Tzir’a”, which translates to “Wasp” in English.


..shame on the israeli commando!