Raúl Pateras Pescara de Castelluccio was an Argentinian engineer living in France with an interest in helicopter design.  By January 1924, he had nearly five years of development work into his helicopter projects.  At Issy-les-Moulineaux, he rolled out his latest design, which included a revolutionary device that he called the “cyclic”.  This allowed him to vary the angle of attack of the helicopter blades, thereby tilting the angle of thrust into any direction.  Critically, it pioneered the first fully controlled flight of a helicopter in world history.  After a series of test flights earlier in January, he gathered the required witnesses and authorities together to make a record attempt, aiming to win the 10,000 franc Aéroclub de France prize for the first flight to achieve a 1 kilometer distance.  The date was January 29, 1924 — today in aviation history — and there was only one problem — the winds were gusty and irregular…. 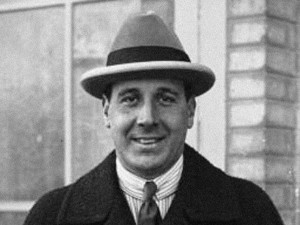 Pescara had pioneered his first helicopter innovations in 1919, when he filed a number of patents in France and Italy.  In 1921, he had flown his first helicopter design, though at an indoor site.  By 1923, he had pioneered a contra-rotating, two “screw” helicopter design which each rotor was a four bladed, biplane.  This he called his No. 3 — critically, it proved his biplane rotor designs.  With the beginning of January 1924, he had already moved on and rolled out his next design — oddly numbered Model 2F.  Informally, he called the latest design, “The Marquis Pateras”.  With it, he set out to achieve a series of world record flights, as reported in Flight, the newsletter of the Royal Aero Club:

During the past month M. Pescara, who has been continuing his experiments with his helicopter at Issy-les-Moulineaux, succeeded in making several flights, incidentally creating a helicopter record.  On January 16 he improved on his previous record (of 5 mins. 44 secs.) by remaining in the air for 8 mins. 13 secs.  On this occasion he succeeded in flying round the whole area of the ground, executing figures of eight, circles, etc.  On the following morning he flew in a straight line for a distance of 500 m., but, owing to a slight failure in one of his gears, he had to discontinue his trials for the time being. 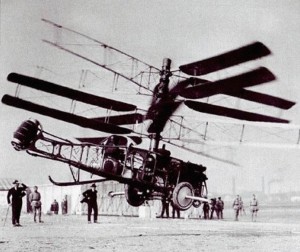 His helicopter design was described in technical terms by the editors of Flight, though they failed to understand the truly revolutionary breakthrough that Pescara had achieved with the invention of the cyclic.  Their description only related the following:

The Pescara helicopter consists of a more or less conventional type fuselage, containing the pilot and 180 h.p. Hispano engine, extending vertically up from the centre of which is a shaft carrying two sets of four-bladed horizontal airscrews mounted one above the other.  Each set of airscrews is made up of biplane-type blades — miniature biplane wings, in fact —  with wing-warping method of control.  These airscrews are rotated, in opposite directions, by the engine through suitable gearing. 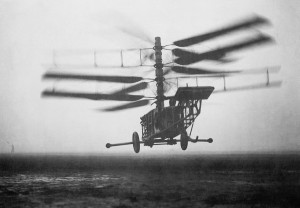 The “Marquis Pescara” Model 2F helicopter on one of its record-setting flights.

The key to his Model 2F’s performance was the cyclic itself.  With it, he could control the angles of attack of the top blades on each of his biplane “airscrews”, thus causing the rotors to tilt forward or to the side or to any desired angle.  Essentially, it allowed him to direct the thrust of the helicopter’s rotors in the desired direction.  Where every other helicopter designer had focused on vertical movement, which meant their designed needed some other propulsion means to move forward, with the Pescara cyclic, the pilot could fly the helicopter in any direction just based on the overhead rotors themselves.

On January 29, 1924, the weather did not cooperate with his attempt.  Throughout the day, the winds continued to gust heavily.  Nonetheless, the officials and required witnesses had assembled for the record flight.  The prize of the Aéroclub de France was at stake and he planned to make his best attempt.  A course was laid out — 500 meters was measured from the take off point to a flagman who would serve as a half way point.  The idea was that he would fly to the flagman, then circle around and return to land in the same spot from which he had departed, thus flying a full kilometer.

In each of his attempts, the Model 2F could rise just a few feet off the ground.  Each time, however, he failed to achieve the full distance.  Nonetheless, he had made flights of nearly 3 1/2 minutes and also 8 minutes duration.  Both were records for helicopter flight — all that remained was the kilometer mark to win the 10,000 franc prize. 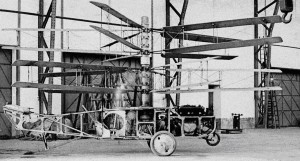 The Model 2F helicopter in its hangar in France.

In that second flight, he had landed just two hundred meters short of the goal.  In each flight, the winds had driven the helicopter down and he had been forced to land.  He would fly again a third time — it was late in the afternoon and this would be his final attempt.

At his third attempt he rose vertically to a height of about 4 ft., and then proceeded horizontally for a distance of half a kilometre, and, rounding a pylon at this point, he flew back again, descending on the spot at which he had started.  This flight lasted 10 mins. 33 sees., and constitutes a world’s record, but unfortunately, owing to a slight mishap which occurred just before he landed, when a sudden gust of wind caused the tail-skid to touch the ground for an instant, M. Pescara failed to win the prize. 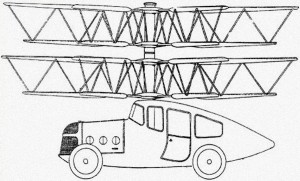 Incredibly, even if the officials recognized that his helicopter had indeed achieved the distance required they withheld formal recognition.  All knew that the gusty winds had just caused an inadvertent light touch, yet it did not matter.  It was frustrating and the rules were clear that no part of the helicopter was allowed to touch the ground at any time during the flight — for any reason.  In April of 1924, he tried again, counting on the Spring weather to ensure better conditions.  In that flight, he finally broke the 1 kilometer record flight and had it certified by the FAI.

Pescara’s life was one of innovation and masterful engineering work.  Along the way, he invented not only the cyclic but also proved the concepts of auto-rotation, which is essential to helicopter flight safety today.  For all that, the name of Raúl Pateras Pescara is largely lost in aviation history.  Most helicopter pilots today have never heard of him even if he was the essential equivalent of the Wright Brothers, pioneering the first truly controlled flight of a helicopter.

Though periodically named in Argentina — with pride — overall, it seems that he deserves wider, better recognition for his achievements.