Maurice Chevillard was a French aviator who passed some time in 1913 in England.  Others were content in easing their uncertain machines around the aerodrome, seeking speed records or flying long distance flights.  Some sought to make a living by flying paid exhibitions or flying passengers in chartered airplanes.  Yet Chevillard pursued a different course.  Almost single handed, he developed the field of aerobatics, presaging today’s airshow routines with his unique style, which centered on what he called the “Chute de Côté”.  It wasn’t long before he was traveling around Europe.  In 1913 alone, he flew in France, England, Norway, Denmark and Sweden — wherever he could demonstrate his skills and earn a bit of money in the process.  He was, as the Norwegians declared, the world’s first “Mesterflyver” (Norwegian for “Master Flyer”).

His daring seemingly knew no limits — except for one thing, he flew a Farman MF.7 Longhorn biplane with just an 80 hp engine.  It was a type that others considered underpowered, heavy and yet fragile enough to warrant at least some care in a tight banking turn.  How did he do aerobatics in it?  It was quite simple really, he just flew the plane within its limits….  And of course, he commonly flew with a passenger behind him in the tandem cockpit. 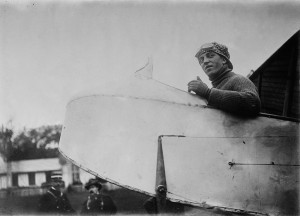 The Birth of the Airshow

Today, airshow routines offer a wide range of maneuvers that include everything from loops and rolls, to Cuban eights, hammerhead stalls, and even the coveted Lomcevak where the plane flips tail over nose in a low altitude, fully-developed accelerated stall.  Precision is king and the aircraft are designed to do what seems to be the impossible.  They fly upside down, right-side up, climb vertically, twist and skid, stall and slip in every direction, seemingly at the flick of the control stick.  The modern aerobatics pilot has it all, including a choice of airplanes like the Extra 300 and the Sukhoi 26, among others.

Maurice Chevillard, however, just had his Farman “bus” and his talent for flying — he became the airplane as he flew, rather than sat in it and delivered control inputs to the outside airplane, hoping that it worked out right.  In effect, for Chevillard, mentally his outstretched arms were akin to the aeroplane’s wings, his fingertips the ailerons and wingtips, the tilt of his head was the nose of his “bus”, which he could tilt up or down as he willed it.  This natural touch withthe machine allowed him to press to the limits, yet not overstress the wings.  He might have gone to a vertical bank, but he did not pull the stick back into a 9G turn, rather, he let the nose fall away and gently recovered after a brief vertical, but slow speed dive with the power off. 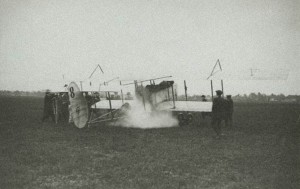 At Juvisy on November 7, 1913, Maurice Chevillard prepares for another record breaking flight — he performed five consecutive loops that day.

Today, we are lucky to have a detailed description of his Chute de Côté, as it was written up 100 years ago today by another pilot who identified himself just as “A. J.”  His description recounted his experience as a passenger sitting behind Chevillard as he threw the plane about the sky seemingly with careless ease:

We started with a very rapid ascent — in itself a grand sensation — and made a wide left-hand circle until we were over the shilling enclosure.  Then — I held on tight!  But I need not have troubled, for it was only just as the biplane commenced to bank that I felt a very slight tendency to leave my seat (I had the services of a safety belt) and after this it felt as though someone were holding me down on my seat.  This was a little unexpected — as everything had happened so quickly that I had not had time to realise that centrifugal force would keep me in situ — so I held on. 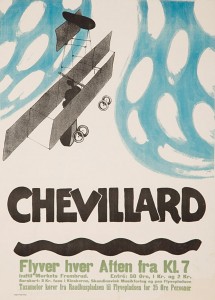 Higher and higher went the right side until nearly vertical and almost simultaneously we began to dive.  During this first dive I looked straight ahead.  There, near the horizon, was the Welsh Harp water, then suddenly the whole horizon line — Welsh Harp and all — tilted over to the right, until almost vertical instead of horizontal, and then the whole ground and the “vertical horizon” seemed to swing sideways to the right for all the world like a table-cloth slipping over the edge of a slippery table.  By this time I was looking straight on top of those immediately below, although I was still sitting in my normal position, looking forward.

Thus we dived till about 100 ft. or so from the ground, which approached with startling rapidity, when we flattened out and commenced to climb again.  As we made our way across the aerodrome I was looking to the right at a train on the railway, when Chevillard made a sharp, banked, left-hand turn.  The ground flattened itself out, and finally disappeared from view, so I turned quickly to the left, and found the ground “swivelling” up on that side.  The result of this quick movement on my part was a weird sensation like that experienced by many when they “fall” in their dreams. 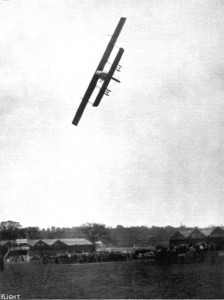 The writer also detailed Chevillard’s own description of how to perform the Chute de Côté, even including instructions on how to move the stick, when to take off and add power and so forth — it is almost enough to make us want to go up and try a few ourselves:

And Chevillard?  Well, he sat there in front of me, almost motionless the whole time, and it was with the greatest difficulty that I noticed at any time what he did in the way of controlling the machine, so I will not attempt to explain how he does the trick from actual observations, but give his own explanation.  First of all he generally switches off the engine; then he banks the machine over by bringing the control lever sharply over to the left, following up this movement, almost simultaneously, by pushing the lever forward.  The machine then begins to dive, and he immediately returns the control lever to its normal position, at the same time bringing the rudder over with his left foot, banking and diving the machine still further.  By this time he usually switches on again.  At the same time that he puts the rudder over, he brings the control lever right back, raising the elevator.  Here is the most interesting moment of the dive, for we are brought face to face with conditions similar to those experienced by the late Lieut. Parke when he made his famous dive in the Avro enclosed biplane.  I do not intend to go further in this matter, but leave it to my readers to argue it out for themselves, and get lots of fun out of it — I did at the time. 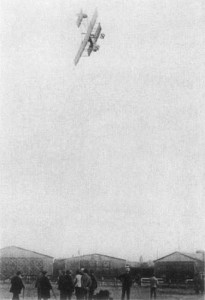 Maurice Chevillard and his Farman performing in Norway in 1913.

Photographic evidence shows that the Farman would end up in a perfectly nose down, vertical dive after each Chute de Côté, from which he would recover with gentle back pressure on the stick.  Typically, he performed these maneuvers at least than 500 feet of altitude, demonstrating his true mastery of low level aerobatics.

One suspects that he would be a popular airshow performer even today — well, at least if he brought his Farman!

* Note:  The write ups from “A. J.” appeared in Flight, the newsletter of the Royal Aero Club in England in their April 19, 1913, issue — exactly 100 years ago today in aviation history.

What became of Maurice Chevillard?


Here is the best I could find, and it isn’t much. After being the first person to do a barrel roll in 1914, he entered French military service, was granted a military pilot’s license and served with the Armée de l’Air. He was captured by the Germans in October of 1914 and released in November 1918. Maurice Chevillard died in Nantes, France, in June 1943 at the age of 56.


That’s quite a good bit of research, as so little is available about Chevillard’s later life. I hope that some of our French members can do a bit of research there to fill in the gaps. Among the questions I had were the circumstances of his death in 1943 — this was at the height of the occupation of France by Germany, making one wonder if the death had to do with World War II. Additionally, I’d like to know if Chevillard returned to aerobatics flying after the Great War.

Maurice Chevilliard (always with I between L and A) was my grandfathers brother on my mothers side. He died in Mantes, not Nantes! I know a lot about him and I have a lot of photographes and all sorts of documents. After World War I, he was director for two pilots schools.


The poster on here is advertising a show in Copenhagen, not Norway.


Thank you for the correction — we’ve corrected the article.