FAMILY DIRIGIBLE. A competent, steady man wanted for slow speed, low level Tangye dirigible.  No night work, no sea trips.  Must be member of the Church of England, and make himself useful in the garden.  M. R., The Rectory, Gray’s Barton, Wilts.

This passage appeared in an advertisement on page 49 of the New York Times from March 14, 1909.  The same ad appeared in numerous other newspapers at the time worldwide.  The ad wasn’t unique — in fact, the entire page was filled with ads and futuristic stories and images.  At the top were the words, “Kipling’s Visions of Conquest of the Air”.  The full page was the product of the fertile imagination of the famed author, Rudyard Kipling and was placed as a faux advertisement from “a Century hence”. The goal was to promote his newest literary work, “With the Night Mail”, that was being published that year.

Rather than speaking of rocket ships or jet packs, Kipling’s vision of the future was — and is still — unique because of its simplicity.  While he may have wildly missed the mark on his predictions of a future filled with flying machines for every citizen, who can blame him? Given the crystal ball challenges that come to whosoever dares predict a future 100 years ahead, Kipling was no more and no less accurate than his peers.

However, he achieved something far more important than an accurate prediction of the technology — he envisioned a world where flight would be so commonplace, so banal, and so normal that nobody would think twice of flying at 38,000 feet of altitude, at 500 mph, while sipping a coke and eating peanuts. 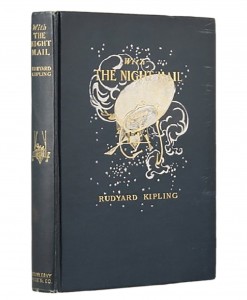 In the very issue of the New York Times where his fake page was published, there were articles that were interesting enough in their own right.  There were stories about a Michigan trapper who died at 104 years old and about a child abduction.  Maybe times haven’t changed much after all.

As well, there was this gem, headlined:  “SILVER DART TO FLY FOR AMERICAN CUP; Test to be Made This Week Under New Rules at Baddeck, Nova Scotia. A NEW RECORD LOOKED FOR / The McCurdy Aeroplane Must Beat 16 Miles to Win — New Rules Adopted for New York-to-Albany Contest.  March 14, 1909”.

You really can’t get any better than that.

The Banality of It All

Kipling imagined a world of less wonder.  Amazingly, he not only wrote it, but had it illustrated in his book.  One of the illustrations (which we include as the title image of this article), showed a smartly dressed couple drinking tea as they gaze out the window at a passing blimp.  They pause as they recognize it as a friend’s airship.  Blithely, the man says to his wife, “I’ve asked him to tea on Friday.”  That was the very caption he placed under the illustration in his book.

Of course, he got the clothing wrong.  He imagined that we would never advance much beyond the high style of the “Belle Époque”.  Are faded jeans any better though?  Looking back, it seems that despite all our advancements, we’ve lost something over the years too.  We may be far beyond airships and fanciful balloon rescues, but what happened to high tea?

Perhaps the greatest irony is not that we can rush to anywhere in the world at the drop of a hat, but simply that we don’t wear proper hats anymore.  Or maybe that these days it seems like we have to rush around just to survive.

There’s nothing wrong with nostalgia for an imagined glorious past.  It might even be a good thing as we define what our future might yet be.  Airships aren’t the half of it, after all.

The wonder of flight has become utterly ordinary.  The amazing becomes the ordinary if given enough time.

Today, over a century since, we rarely pause to think about just how far we’ve come. We complain when a flight from New York to Paris leaves a half hour late.  Our smart watches allow us to video conference with friends living half way around the world.  Rockets have taken us to the Moon and, soon enough, they will take the first astronauts to Mars.

In the world Kipling imagined, racing planes were not rare.  Air races weren’t big events where nations vied against one another like they did in the famed Schneider Cup or like at Reno.  Kipling saw a world where folks might attend the local air track on weekends, enjoying beers and barbecue.  He saw the aviation equivalent to today’s youths hot rodding out by D Avenue over $20 bets, with wings instead of chromed wheels.

Ultimately, even Kipling’s grand vision missed the mark — or did it?  For instance, who could have thought that a helicopter in every driveway wasn’t the future?  Many people dreamed of that even as recently as the 1960s.  That’s barely 50 years ago.  Personal airplanes would be soon possible, so everyone thought — but they weren’t.  Still, there might come a day yet when that might be.

Looking Back & Looking Ahead

If we look ahead 100 years from now, the world will be changed yet again.  We cannot imagine just how far we’ll go, how high we’ll fly, or how fast we might become.  Self-driving cars are fast becoming today’s reality, so it may not be all that long before we have a self-flying personal aircraft in the driveway after all.  Or that we take the blimp down the street to visit a café.

Even those amazing things quickly cease being things of wonder.  It doesn’t even take that long.  One day, a husband might say to his partner, “Honey, I just flew over to the store and they were out of bread. It seems like they never have what we need anymore!  What are we supposed to do, pop off to Paris to the bakery every week or something? I mean, that’s two hours each way!! Next time, I’m shopping at Meijers!!”

Maybe Kipling wasn’t all that far off after all.