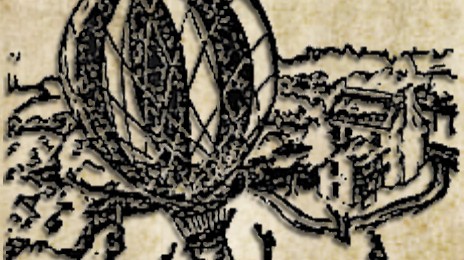 “With the steady fortitude of an old voyager,” 13 year old Edward Warren acknowledged the crowd below with a “significant wave of his hat.”   Attached to a tether, Warren flew upward on the first “American Aerostatick Balloon” before a “a numerous and respectable Congress of People.”  After the flight, Warren disappeared into obscurity.

One of the most important aviation firsts in America is all but lost in history — the story and identity of the country’s first aviator, who was only 13 years old.  Putting the story in context, it had been less than a year earlier when, on October 15, 1783, Étienne Montgolfier had achieved the first manned balloon flight in Paris.  America had only just emerged from the Revolutionary War, which also had ended the year before.  News of Montgolfier’s flight reached America by boat and soon the public was swept up with enthusiasm for balloons and aviation.

A few months later, one of the two Americans who had witnessed the flight in Paris, Dr. John Foulkes, returned to America.  His arrival made the stories of balloon flight tangible.  He set about raising funds to construct America’s first balloon and by May of 1784, he was doing public demonstrations of small, unmanned paper test balloons which burned bundles of straw to produce the needed hot air for flight.  What Foulkes didn’t know was that a small-town lawyer from Bladensburg, Maryland, named Peter Carnes was already at work building America’s first balloon.  For Carnes, however, the venture was not about science and pioneering exploration — it was about harnessing the nation’s new-found enthusiasm for balloons to supplement his income through ticket sales to an audience.  Carnes had no information about balloon design and absolutely no scientific background, but found ample motivation from his very American entrepreneurial desire to make money.  Against all odds, he literally reinvented a successful balloon from scratch on a shoestring of funding.

The First Flight of a Balloon in America

Thus, just nine months after the first manned Montgolfier flight in Paris, Carnes was ready for his own first flight.  He published an advertising notice which described his balloon as made up of colored silks that measured 30 feet across, towering 35 feet high.  He boasted of a “splendid chariot outfitted for the reception of two persons,” in which he had affixed a round iron stove that passengers could stoke up to produce sufficient hot air to fly.  He scheduled the event at Howard Park in Baltimore on June 24, 1784.  Further, he offered paying customers a lecture regarding, “the great uses to which the important discovery may be applied, for the convenience and delight of human life.”  He sold the best seats for $2 a head, with lower cost seating priced at “10 shillings.”  The event would take place within a closed yard and Carnes announced that an armed guard would prevent unpaid attendance, even stating that it would “be justifiable in taking the life of any person who attempts to force his way into the field.”

By the appointed day of the flight, Baltimore was “Balloon Mad.”  Almost all of the stores were closed.  A sizable crowd of paying customers filled the yard, much to the delight of Carnes.  All went as planned until Carnes found that he was too heavy for the lifting capability of his design, as he weighed 234 pounds.  Instead of demonstrating manned flight, he could only demonstrate the balloon by cranking it up and down on its tether.  The crowd complained, yet still appeared generally pleased to see a balloon in any case.  Finally, for the last flight of the afternoon, a 13 year old boy named Edward Warren volunteered that he might be light enough to fly.

Carnes happily ushered him into the “splendid chariot” and began cranking out the tether line as the balloon made its ascent.  The crowd was enthralled and soon took up a collection of money to give to the boy aviator when he returned to earth, or, as written in the newspapers of the day, to the “terrene element.”  After his descent, unharmed by the flight, Warren graciously accepted the gift of money.

Afterward — Carnes and the Crash

In the end, Carnes’ competitor Dr. Foulkes never flew his balloon.  Instead Carnes would launch his second flight in Philadelphia, which took place less than a month later on July 19 of that same year.  He got permission to launch from within the walls of the city’s prison, thus saving the cost of having to construct another enclosure to keep out the non-paying public.  Carnes transformed the “splendid chariot” into a spare and lightweight framework so that he could take the flight himself.  Soon after launching, however, the wind pushed the balloon into the prison compound wall.  Carnes leapt to safety when the tether snapped.  Without his weight on board, the balloon soared skyward before bursting into flames and plummeting back to earth.  Mistaken obituaries published news of Carnes’ death.  Shaken, Carnes abandoned aviation forever.

To this date, despite a number of research attempts, nobody knows anything more about what happened to the young Edward Warren, America’s first and most unlikely aviator.

Another great innovation that came out of early ballooning was the modern parachute.  The early balloonist Jean Pierre Blanchard developed parachutes that he used in 1785, when he dropped a dog safely from his balloon to the delight of crowds below.  Blanchard’s parachute differed from earlier designs, which had rigid frames, by being composed of folded silk cloth.  In 1793, although not witnessed, Blanchard made the claim of being the first person to use his parachute in an emergency, stating that he had jumped from an exploding hot air balloon.  Surprisingly, it would only be 126 years later, in 1918 during the last year of World War I, that pilots began commonly using parachutes while flying.


Great information on the history of aviation!