On this date in aviation history in 1946, just one year after the end of World War II, Italy would file the paperwork for a new national airline, Alitalia, a conjunction of the words “Ali” (Italian for “wings”) and “Italia”.  The new airline would be the symbol of a resurgent aviation industry in war torn Italy.  Headquartered in Rome, it would take another eight months for the airline to first fly — flown by a surviving ex-Italian Air Force Fiat G.12CA Alcione, a dated trimotor design that had first made its debut in 1940 and had served as a troop transport during the war.  For the next 60 years, the airline would carry Italy’s flag across the globe, yet only turn a profit for one year of its entire existence before finally going into full bankruptcy in 2008. 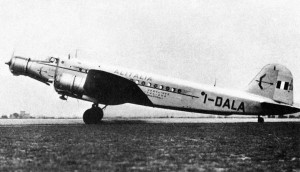 The 18-passenger Fiat G.12CA Alcione carried three radial engines, the Alfa Romeo 128, one on each wing and one in the nose.  A large aircraft that was somewhat boxy in form, it was stable and considered reliable given its three engines.  Designed by the famed Italian aeronautical engineer Giuseppe Gabrielli, the G.12 was an all-metal low-wing aircraft with a cantilever design, retractable main landing gear and a fixed tail wheel.  Each of Gabrielli’s designs carried his first initial — and from the G.12, he would go on to design no less than 142 aircraft in his career including Italy’s best fighter of WWII, the Fiat G.55 Centauro.  When he passed away in 1987, he had just finished his last design, the G.222, which evolved into C-27J Spartan.

In the G.12, Gabrielli had packed in the best features available in 1940.  It was clearly a dated design given the speed of advancement in aeronautical sciences during the war.  Thus, even as Alitalia began its flight operations with the G.12CA, Gabrielli was already at work developing the derivative G.212 (in the interim, he had produced over 200 designs, many variations of the same essential design). 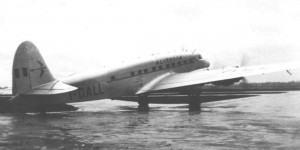 The First Flights and First Year

Alitalia commenced scheduled passenger and cargo flights on May 5, 1947, with the first flight taking off from Turin, Italy, and flying to Rome via Catania.  At the controls was a former military aviator, Virginio Reinero.  On July 6, the airline made its first European international flight, landing in Oslo, Norway.  By the end of 1947, in just seven months of flying, Alitalia had expanded rapidly.  New aircraft were added, including another ex-Italian Air Force type, the Savoia-Marchetti SM.95, a plane that had been subject of one of Italy’s most audacious wartime efforts, “Operation S”, the bombing of New York City. 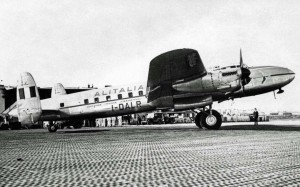 The first transatlantic aircraft running the route between Rome and Buenos Aires, an AVRO Lancastrian.

More routes were added across Italy and into Europe and as the year came to a close, the airline logged its 10,000th passenger carried.  In 1948, the airline had expanded its reach across to South America, the first true long distance international flights with its new AVRO Lancastrian.  The airline traced a route from Rome to Dakar, then across the South Atlantic to Natal before heading on to Rio de Janeiro-San Paulo and Buenos Aires before turning around to reverse the route back to Rome.  The airline advertized with the promise that the flight each way would entail only 35 hours in the air!

In July 1950, Alitalia finally reached New York City.  Throughout the 1950s and 1960s, the airline would steadily expand, adding routes to North America and elsewhere.  In this period, the airline switched to all-jet aircraft, flying the Douglas DC-8.  By the 1990s, the airline was carrying 25 million passengers a year, but was also going bankrupt in the process.  Typical of state-owned national airlines, Alitalia was a perennial loser — in all of the years of its existence, it had shown just one profitable year — 1998. 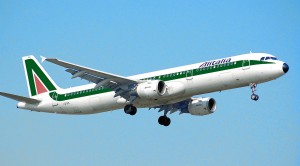 Alitalia was becoming less and less competitive with every passing year, yet the Italian government continued to subsidize its operations.  Subsidies hovered around $1.5 billion per year, yet even then, the airline was posting $600 million losses.  Finally, as a result of the European Union rules, such price support policies and payments were effectively outlawed.  Without it, the airline had no hope.  In 2008, Alitalia was liquidated and the operating components and aircraft were acquired by a new, privatized entity (though still with some Italian government ownership) of nearly the same name.  Throughout its life span, Alitalia may have lost money, but it also served to represent the flag of Italy around the globe, creating a positive reputation and enabling direct travel to/from Italy and numerous international capital cities.

The new Alitalia, called Alitalia – Compagnia Aerea Italiana, today stands as the world’s 19th largest airline.  It serves 86 destinations in 40 countries, continuing the long tradition of flying Italy’s flag around the world with 120 aircraft, ranging from Boeing 777ERs to smaller Airbus A320-200s with (as of 2009).  Alitalia boasts a young fleet with the aircraft averaging less than 10 years in service.  It also remains the largest domestic air carrier within Italy.  With a constant passenger load of around 25 million per year, the airline continues to fly and will do so for years to come, linking Italy with the world.

Alitalia also serves a “higher purpose” as the chosen air carrier of the Pope, an honor it has upheld since 1964.  To support papal visits worldwide, the Vatican charters an aircraft exclusively for each flight, managed by Alitalia and its crews.  When Alitalia was teetering on dissolution in 2008, the Italian press carried word that Pope Benedict XVI had commenced “praying for the airline”.  It seemed to work, as the airline was thereafter acquired and continued in operations afterward.  When the Pope is aboard, the chartered Alitalia flight is nicknamed “Shepherd One” and carries the call sign “Volo Papale” followed by the aircraft serial number, for example, “Volo Papale 551”.  Outside, the fuselage is temporarily emblazoned with the Papal heraldic emblem, while inside, the Vatican directs that the entire first row of their Magnifica Class (Alitalia’s Business Class area) be removed to provide the pope sufficient leg room — about 8 feet, lined by five windows.  “Magnifica” indeed!

What is the history of Italy’s audacious “Operation S” and why wasn’t it flown, since the aircraft, an SM.95, could have easily reached New York City in 1943?


Eight feet of leg room for the Pope? I am much taller than him (6′ 4″) and don’t get
anything close to that. And no five windows either…. Oh, I forgot, he’s the Pope….