Today in aviation history, on September 12, 1943, nine gliders were released from their tow lines and began to make slow orbits, descending toward a ridge line and mountaintop. Their landing zone was near a makeshift prison, a converted ski resort guarded by regular infantry forces.  In each glider, a small group of special forces commandos sat calmly, fiddling with their gear and weapons.  Due to the importance and secrecy of the mission, all of the men were officers, hand picked from among the best in the force.  The plan was audacious — they would land silently, form up and then make a fast march toward the prison on an adjacent mountain. Their intelligence intercepts had confirmed their man was held there by a small force.  Meanwhile, a small liaison plane was readied for a quick flight to pick up the rescued man and fly him to friendly territory.

This is the little known story of the dramatic rescue of the deposed Italian fascist dictator, Benito Mussolini, a rescue to be carried out by a group of Fallschirmjäger paratroop commandos of the Waffen-SS. 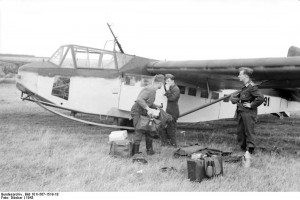 Soon after the invasion of Sicily by Allied forces in 1943, the Italian government had deposed Hitler’s Axis partner leader, Benito Mussolini.  As the Allies advanced, it became clear that there would be only so much that Hitler’s armies could do to protect the country.  As a response to the failing Italian position in the war, the fascist government replaced Mussolini on July 25 with Marshal Pietro Badoglio.  Mussolini was taken to a mountaintop prison, a former ski resort called the Campo Imperatore Hotel.  There, under the control of an armed guard of Italian Army carabinieri, he would wait, uncertain of his future. 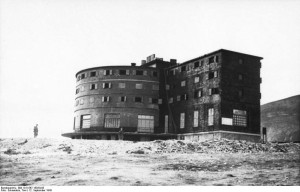 The makeshift prison where Mussolini was held, on a mountaintop without a reasonable line of approach that would impede a field of fire from the defenders.  Photo Credit: Toni Schneiders, Nazi Propaganda photographer, from the German Federal Archives (Bild 101I-567-1503A-05

As the noose tightened around Mussolini, his one time ally, the Germans, decided to rescue Il Duce (as he was called) and bring him to the safety of German-held territory.  For the mission, a group of paratroop commandos from 2. Fallschirmjägerdivision, FJR.7, 502nd SS Jäger Battalion were selected and placed under the leadership of Major Otto-Harald Mors.  Meanwhile, Mussolini’s movements were tracked carefully by two other Germans assigned to the project personally by Hitler — Otto Skorzeny and Ernst Kaltenbrunner.  German intelligence soon decoded an Italian message that confirmed Mussolini’s whereabouts in what amounted to a cryptographic coup of the first order.  To ensure that the maximum knowledge of the situation was on hand during the mission, Otto Skorzeny joined with the Fallschirmjäger commandos to fly on the mission.  The on-the-ground commander for the mission would be Lieutenant Count Otto von Berlepsch.

After their release from their tow planes, all nine of the DFS 230 gliders circled silently to perfect landings in the mountains nearby.  The paratroop commandos quickly formed up, then descended and worked their up to the high alpine meadow atop the Gran Sasso massif, in the Apennines.  Even though the approach to the hotel was exposed with little cover, the Italian guards were taken by surprise with the arrival of the small commando force. They quickly began to move into defensive positions.  The Germans, however, had planned well — along on the mission was an Italian general, Ferdinando Soleti, who had come over to the Nazi side. 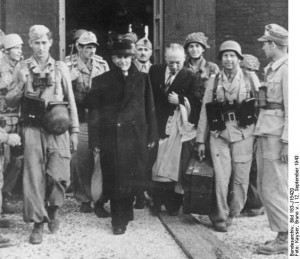 As the carabinieri formed up, General Soleti stepped forward and assumed the authority of a general. He commanded them with an order to not fight.  The carabinieri were confused, but could recognize the authority in Soleti’s voice.  Further, they recognized that they were outclassed by the approaching commandos. Wisely, Tthey laid down their weapons and not a shot was fired.  It was a lucky thing, since most, if not all, otherwise would have been killed, given the superiority of the commando team. 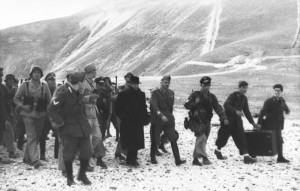 Benito Mussolini walks from the Hotel in the company of Otto Skorzeny and the Italian General. Photo Credit: Toni Schneiders, Nazi Propaganda photographer, from the German Federal Archives (Bild 101I-567-1593A-07)

Entering the former ski resort, the commandos quickly located Mussolini.  Meanwhile, Otto Skorzeny neutralized the Italian radio and radio operator, ensuring that no reinforcements could be called. He was so fast that the radio operator had no chance to even transmit word of the rescue.  The entire operation had been carried off without a single failure and, even after success, the Italian government and military still had no idea of what had taken place.  Skorzeny approach Mussolini and, using his familiar title, told him “Duce, the Führer has sent me to set you free.” 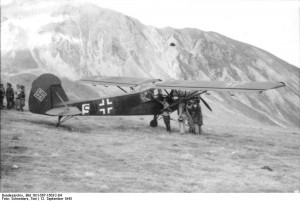 Mussolini boards the aircraft to fly him out to Vienna, high in the alpine meadow. Photo Credit: Toni Schneiders, Nazi Propaganda photographer, from the German Federal Archives (Bild 101I-567-1503C-04)

As the commandos escorted Mussolini out of the Campo Imperatore Hotel compound, a Luftwaffe pilot named Captain Walter Gerlach circled and touched down nearby in the alpine meadow with a Fieseler Fi 156C-3/Trop Storch, a light, high-winged liaison plane.  Quickly, Mussolini and Skorzeny boarded. The pilot turned to attempt a take off, however, he was overloaded, on a grass field and at a somewhat elevated altitude. This proved a lethal mix. The Fieseler Storch nearly crashed trying to get off the mountaintop.  Somehow, Gerlach was able to save it.  Climbing out slowly, he proceeded to Vienna.  Meanwhile, the Fallschirmjäger commando unit made its escape on foot.  Once in Vienna, Mussolini was feted at the Hotel Imperial — happy to be free again.

Editor’s Note:  The intent of this article is not to glorify the deeds of the Nazis nor the Waffen-SS, but rather to recount history — the story of the rescue of Mussolini is an amazing accomplishment, perfectly planned and undertaken by airborne troops and aircraft.  Nonetheless, it remains a well-recognized fact that the actions of Hitler and the Nazis were inexcusable, despicable and horrific.

One More Bit of History

Mussolini’s freedom would prove to be short lived.  The Allied advance through Italy was impossible to stop.  Steadily, as the Italian leader was reduced in importance, he became little more than a pointless figurehead.  When the Italian government surrendered, the end was nearing.  In January 1945, he was interviewed by Madeleine Mollier — he noted with clear fatalism, “Seven years ago, I was an interesting person. Now, I am little more than a corpse…  Yes, madam, I am finished. My star has fallen. I have no fight left in me. I work and I try, yet know that all is but a farce…. I await the end of the tragedy and — strangely detached from everything — I do not feel any more an actor. I feel I am the last of spectators.”  A few months later, on April 28, 1945, he was captured and summarily executed by Italian anti-fascist partisans. Two days later, Adolf Hitler committed suicide in his bunker beneath Berlin. It was a fitting end for two of the world’s worst fascist nationalist dictators.

What were Benito Mussolini’s last words before he was executed?


During the end of ww2, he and his girlfriend where captured and executed. Not well documented.

What shit (merda) this Honours Forfeiture Committee is! Can you imagine the shitty (merdoso) British have stripped me of my knighthood?

Shoot me in the chest!
To his executioners.
~~Benito Mussolini, Italian dictator, d.1945
Shoot straight you bastards and don’t make a mess of it!
Executed by firing squad.