Rise of the Draken

Today in aviation history, on October 25, 1955, marks the first flight of the SAAB J 35 Draken, a revolutionary fighter interceptor that established the Swedish military aviation industry as a global competitor with the United States, Russia, France, and England.  This achievement is all the more remarkable given that Sweden’s entire population is less than that of New York City and its suburbs.  Moreover, Sweden, a neutral power like Switzerland (though heavily leaning to the West during the Cold War), pioneered a number of innovations that were beyond anything the others had yet achieved though, on first glance, those innovations are not readily apparent.  So just what had the Swedes accomplished that was so special?

The SAAB J 35 Draken was originally conceived as a replacement for the Swedish Air Force’s venerable J 29 Tunnan, an aircraft that was the equivalent of the F-86 Sabre and MiG-15 in its capabilities, range, performance and load.  The Tunnan looked every bit like a fat barrel with sweptback wings bolted on, yet those looks belied the extraordinary maneuverability of the little plane — as one pilot joked, “On the ground, it is an ugly duck, but once aloft, it is a swift” (referring to the beautiful flight of the swift, a type of bird common in Europe and noted for its speed and agility).  Yet where the Tunnan had been ugly and fat, the Draken was anything but — it was a needle-nosed aerodynamic masterpiece. 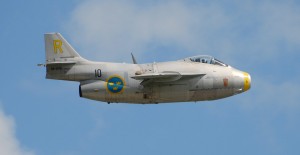 The chief innovation was its unique double-delta wing.  The plane’s fuselage was a predictable tube with the engine mounted inside and the cockpit at the front and a vertical stabilizer attached to the tail.  The pointed nose cone contained a radar system and the air intakes for the engine were on either side of the cockpit at the forward point of the wing root.  The double-delta began at the air intakes — for roughly two thirds of way toward the tips, the sweep back measured an incredibly sharp 80 degrees.  This allowed the plane to achieve design speeds that were in excess of Mach 2.0.  However, with such a sharp sweep, it was recognized that the plane would be seriously lacking in maneuverability.  Thus, the last one third of the wings toward the tips carried a completely different sweep angle, much shallower at 60 degrees.  This brought excellent maneuverability and enhanced control at low speeds while at the same time allowing the plane to fly at extraordinarily fast speeds.

First Flight of the Prototypes

On October 25, 1955, the first prototype aircraft took off for initial tests.  The performance of the double-delta had been aerodynamically predicted and even proven in a small scale flying mock-up, the SAAB 210 “Lilldraken”.  Once those tests were successful in 1952, Saab proceeded with the full-scale prototypes.  Exactly as predicted, the J 35 Draken proved to be fast and agile once aloft.  In fact, the second prototype, which was fitted with an afterburner, accidentally broke the sound barrier on its very first flight — while in the initial climb out! 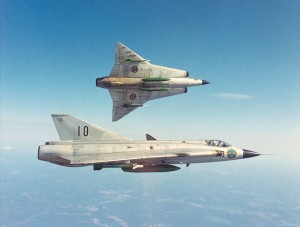 One of the most famous photos of the J 35 Draken, showing a pair of fighters aloft over Sweden, giving an excellent view of the key design features of the aircraft. Photo Credit: Flygvapnet

The plane was a dream to fly.  Later variants could accelerate rapidly with afterburner to Mach 2.0 (the first model topped out at around 1,200 mph, still extraordinarily fast), making it an ideal point interceptor to combat the potential threat from incoming high altitude Soviet bombers.  The plane could be started, scrambled and get to high altitudes and speeds in just a few minutes.  This gave the Swedish nation the confidence that even with a close proximity of Russian and Warsaw Pact bases across the Baltic, they could defend their country in war.

The J 35 Draken successfully passed all of its flight testing.  Quickly, it was deployed in large numbers to squadrons at various bases around Sweden.  First deliveries of the J 35A models began in 1959.  The first fully equipped operational squadron was F13 at Norrköping, which was joined in 1961 by F16 at Uppsala.  Of all models that followed, approximately 600 were delivered to the Swedish Air Force alone.  Despite its extraordinary capabilities and despite Sweden’s tradition in supporting UN peacekeeping operations, the Saab J 35 Draken was never used in war and never fired a shot (or missile) in anger, even if its predecessor, the J 29 Tunnan, had flown combat missions in the Congo as part of the UN force deployed there 50 years ago. 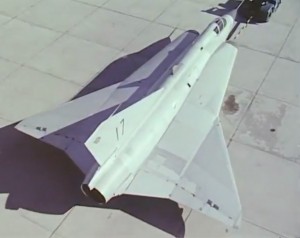 So what were the other innovations that made the SAAB J 35 Draken so extraordinary?  Beyond the maneuverability attained with the unique double-delta wing, there were three major innovations that are not apparent on first look:  low maintenance; rapid refueling and rearming; and take-off and landing capabilities.  These almost unnoticeable features turned out to be among the J 35’s greatest advantages.

Saab had achieved what amounts to a masterwork of reliability in a highly engineered, high performance combat fighter.  For the J 35 Draken, as little 15 minutes of maintenance work was required for each hour of flight — a dramatic reversal of the usual equation.  This meant that the Drakens had very high availability rates.  Typically, Swedish fighter squadrons kept nearly all of their aircraft ready to fly on short notice.  For comparison, other aircraft of that era might have had a 50 to 60 percent availability at best.  This meant that a single squadron of J 35 Drakens had the equivalent combat power of two USAF or RAF squadrons due to higher readiness. 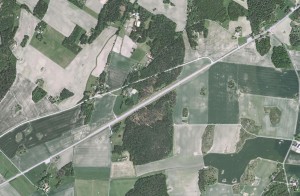 Satellite image of the Håle-Täng Highway Strip that served J 35 Draken interceptors based at Såtenäs Airbase, 4 miles to the northwest; the strip is just 1,100 meters long; revetments are visible at each end of the strip. Photo Credit: Hitta.se

Second was the rapid refueling and rearming capabilities.  This was essential to the mission requirements of the Flygvapnet, which had originally required just 10 to 15 minutes of ground time to turn the aircraft back into the air during combat.  Thus, the J 35 Drakens enjoyed yet another “mission multiplier” that added to their capabilities — they could launch, climb, shoot and recover in very short times and then quickly refuel and rearm and return to the air battle.  Even more impressive was that the refueling and rearming as well as all typical between mission maintenance requirements were developed so that they could be accomplished by untrained citizen-soldier reservists who would likely be called up in times of war.  Essentially, whereas most Western aircraft require years of training to support, the Drakens were “out of the box” ready to go.  They could be kept in service by regular conscripts who were drawn from the ranks of those required to serve just a few years as part of their basic citizenship requirement (at that time in Sweden).

Finally, the aircraft’s take off and landing capabilities were perfect for the nation’s air defense requirements.  The plan was that if a war began, the Draken squadrons would disperse to multiple sites, including outlying airfields as well as many small, improvised strips that were little more than highways that had been built so as to run straight for the required lengths.  These highways were widened and had reinforcement for the increased weight of the aircraft.  At the ends of each of these temporary highway strips were reinforced shelters built into hillsides and forests so as to protect the planes while they were deployed or during landings to refuel and rearm between missions.  The Draken could take off and land on these relatively short strips, where most other aircraft of today’s air forces could never have done that.

Few other aircraft in aviation history have achieved the unique advantages of the SAAB J 35 Draken (in its time).  Whereas most modern fighter designs require significant maintenance depots, hangars, special equipment and support, the Draken enabled an entire generation of pilots in the very small Flygvapnet to provide credible, highly capable air defense for Sweden, even though it was on the front line of the Cold War.  One can only wish that other aircraft manufacturers could master the engineering of Saab and build planes that had such low maintenance requirements and high availabilities — and if they could, the cost of today’s air supremacy aircraft would be a little more palatable to decision-makers.

You can still fly a SAAB J 35J Draken yourself — well, almost — if you head up to Gävle, Sweden.  A small company called NovelAir Gävle has been set up and is run by a group of Swedish aircraft aficionados who “rescued” the nose of a formerly operational J 35J Draken (tail number “Johan-31” or “J31” and built it into a completely realistic flight simulator.  Today, you can schedule half hour or one hour flights at reasonably affordable rates (though it costs a lot more to fly to Sweden for the experience, of course!).  It is important to schedule ahead as they tend to be booked up.  Once there, you take a preflight mission briefing and then climb into the cockpit — for those who don’t fly well (or know how to fly) they can leave the cockpit open and help you as you try to master the plane.  If you have your wings, go for the whole experience and close the canopy — through the headsets, they will give you vectors and altitudes just like a real interception mission.

What makes the flight simulator there so special is that all of the analog instruments are slaved to provide output from the digital processors.  The radar system is a realistic depiction of the 1970s era systems.  All of the buttons and knobs are connected and work as they should, even if their analog settings are translated on the “back end” into digital inputs.  Thus, when you set the switch to fire the guns and pull the trigger, it will actually work.  The stick is, as you would expect, the aircraft’s actual control stick.  Even the gun sight is projected on the glass just as it would have been with an old style radar gun sight system.  A set of huge screens wrap around the walls of the room, giving the pilot over 180 degrees of visual scenery to fly in.  Typically, pilots will take off, climb to altitude and intercept an incoming Soviet Tu-95 Bear bomber or some other similar profile.  If it was me, I’d just fly it through the hills and forested mountain-sides of Sweden’s stunningly beautiful northern regions….

Several other countries operated the Saab J 35 Draken over the years — which were they?  While most Drakens were retired about 12 to 15 years ago, it is a surprise that one country still retains its Drakens in active inventory — which country is that and why are they still in active service?


The other countries who operated the Draken were Austria, Denmark and Finland. However the National Test Pilot’s School in the USA also have a few Drakens. I believe they are the ones still in active service as training/evaluation aircraft for test pilot candidates. Unless you count the Flygvapnet’s heritage flight single J35J?


Correct. The US Military is the last to operationally fly the SAAB J 35 Draken and, as noted, it is used for training and evaluation purposes. Significantly, that training is for dissimilar aircraft maneuvering in ACM — essentially, flying combat against a plane with unexpected performance and characteristics.


I thought it was Austria?