Dawn on October 20, 1934, marked the beginning of the MacRobertson Air Race, a race over an 11,380 mile grueling route that spanned from the starting point at RAF Mildenhall airfield in East Anglia, England, to Flemington Racecourse in Melbourne, Australia.  Along the way, participants were required only to stop at five places —  Baghdad, Iraq; Allahabad, India; Singapore and, three stops within Australia, these being Darwin, Charleville (in Queensland) and finally, the finish at Melbourne.  While initially, 80 competitors signed up, by the morning of October 20th, only 20 aircraft and flight crews would make the start.  Ahead was an international journey that had as much to do with technical capabilities of the new generation of aircraft in the 1930s (a transition period between the biplane designs of the Great War and the monoplanes that would typify the war to come, World War II) and the tenacity and endurance of the airman who dared the hard journey. 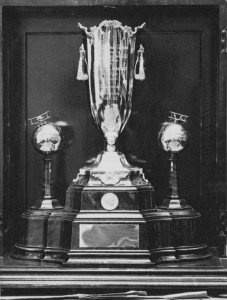 While earlier races to Australia had simply been a prize to the first to successfully make the journey, by the 1930s, the reliability of aircraft had come to the point when the task was more properly organized as a race, with all the competitors taking off together and making the race to the finish line together.  Stopovers, sleep, eating and resupply were all viewed as delays.  The rules were wide open — any aircraft, any number of flight crew members, and only those who departed England could participate to the end.  No maximum or minimum weights, engine horsepower or wingspans were dictated.  The only quantifiable requirement was that the planes had to carry at least three days of food for the crew members — a dubious safety measure if ever there was one.

A collectors card from Player’s Cigarettes depicts the DH.88 Comet “Grosvenor House”, one of the favored entrants in the race.

Aircraft ranged from two DH.88 Comets (a high-power, twin-engine aerodynamic marvel of a racing plane) to a collection of the common airliners of the era, which vied to make the trip at race pace.  These latter examples included a Douglas DC-2 and a Boeing 247D, among others.  The former, the DC-2 “Uiver”, was entered by KLM, the Dutch national airline, and flown by K.D. Parmentier.  The latter, an American entry of the Boeing 247D, was known as the “Warner Bros. Comet” and flown by no less than the dashing air racer Roscoe Turner.  Likewise, a commercial passenger plane type known as the DH.89 Dragon Rapide, called the “Tainui” was flown by J.D. Hewitt of New Zealand.  Numerous small planes also entered, some of which were veterans of endurance and distance racing despite their small size.

Over Paris, Fairey Fox I of Australian aviator (and Melbourne native) Ray Parer was forced down due to maintenance problems.  He would delay his journey and eventually resume the flight to Australia, only arriving on February 13, 1935!  An Airspeed AS.8 Viceroy, flown by N. Stack of Britain, had brake trouble that could not be repaired while at Athens.  It withdrew.  A US entry of a Granville R-6H, nicknamed “Q.E.D.” flown by Jackie Cochran with W. Smith Pratt on board, suffered damage at Bucharest, Romania as a result of malfunctioning flaps.  Another Fairey Fox I, this one from Britain and flown by H.D. Gilman and J.K. Baines, crashed near the Palazzo San Gervasio in Italy — sadly, both men died, the only casualties of the race. 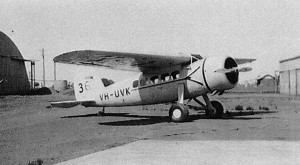 The Lockheed Vega “Puck”, which suffered a mishap at Aleppo, as seen during the race, complete with its racing number of 36.

Beyond Europe, the trip to the Middle East and southwest Asia carried risks too.  An Australian entry of a US-built Lockheed Vega, called “Puck”, and flown by J. Woods and D.C. Bennett, flipped at Aleppo, Syria, forcing it out of the race.  At Bushehr, Iran, a B.A. Eagle, named “The Spirit of Wm. Shaw & Co Ltd.” and flown by F/Lt. G. Shaw of Britain withdrew after unspecified problems, probably with the engine.

The Indian subcontinent too proved challenging.  A Lambert Monocoupe 145, nicknamed “Baby Ruth”, and flown by US pilot J.H. Wright had to end their bid at Calcutta, India.  The speed dominance of the DH.88 Comet planes was without question, but their reliability was very much in doubt.  In the end one of the DH.88s, nicknamed “Black Magic” and piloted by Jim Mollison with Amy Johnson as his copilot, got lost after Karachi when it had a landing gear malfunction.  It ended up landing at Jabalpur, in Madhya Pradesh, India, where no high octane fuel was available.

Hoping to make do with regular petrol and thereby competitively finish the race, Mollison elected to refuel there for the short flight to Allahabad.  Not long after take-off, however, that decision came into sharp focus when his engines burned out from having to run on improper fuel, putting him permanently out of the race.

As well, a Pander S4, nicknamed “Panderjager”, and flown by G.J. Geysendorffer of the Netherlands, had a collision while on the ground at Allahabad and also was likewise stricken from the competition. 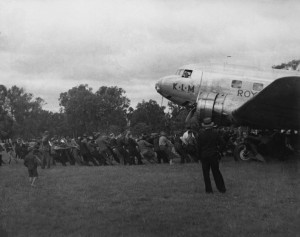 As the final hours of the race wound down, the weather closed in over Australia. The Douglas DC-2 “Uiver” from KLM got lost and ended up flying through considerable storms. By nightfall, they were badly off course over New South Wales and lacking a place to land. The KLM crew was hopelessly lost. The plane was radioing an emergency call when below, the mayor of Albury, on hearing the news, put word out through his small town to organized an emergency landing field.

In a scene that would befit a Hollywood movie, the townspeople gathered their cars at a local racecourse and shined their headlights to illuminate a makeshift landing field. Meanwhile, the local power plant flashed electricity on and off to signal the Morse code letters for “A-L-B-U-R-Y” and thereby called the attention of the KLM flight which successfully landed on the racecourse, no doubt saving their lives. The plane got stuck in the mud and the following morning, the townspeople helped pull it clear so that it could rejoin the race.

The race would be won in less than three days.  The DH.88 Comet nicknamed “Grosvenor House” and flown by Flight Lt. C. W. A. Scott and Captain Tom Campbell Black of Britain, arrived at Melbourne after just 71 hours of flight — this was achieved despite having one of the two engines throttled back due to a malfunctioning engine temperature gauge.  The pilots thought that the engine was suffering oil circulation problems and flew the last leg hoping that the engine wouldn’t seize up.  After landing, it was realized that the engine was fine and it was just a malfunctioning indicator after all. 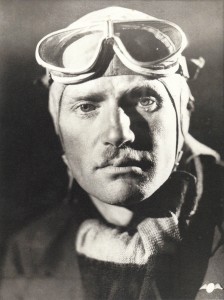 Film of the MacRobertson Air Race

The DH.88 Comet racing planes were purpose-built for the MacRobertson Air Race, however, once completed, the planes went on to set numerous records, many having to do with setting record times in delivering airmail to various destinations — throughout the 1920s and 1930s, the airmail was an area of highest interest in aviation, and so the DH.88 Comet’s participation in airmail routes was certainly understandable.  After such a record showing, the De Havilland Company, found that it could not market the plane to the RAF.  With the outbreak of World War II, however, the company took many of the lessons learned from the DH.88 Comet and applied them to the development of the British twin-engine light bomber, the Mosquito — a plane that would go down in history as one of the best of the war.

Who was MacRobertson and why did he sponsor the air race to Australia, of all places?


He was Sir MacPherson Robertson (abbreviated to MacRobertson) who owned a confectionery business in Australia. He sponsored the race to commemorate the 100th anniversary of the founding of Melbourne.


The site at Albury, New South Wales, where the KLM DC-2 “Uiver” came down today features a well-known memorial to the events of that day. The town of Albury is right on the border of New South Wales (NSW) and Victoria, Australia.


Dooes anyone have a photograph of the take off run of the DC-2 Uiver at the Albury Racecourse. Shall be interested to know the same.


Just had a great talk with my father in his late 90s and remembers this air race well. Every school lunch hour, he would walk to a nearby house where he was lucky enough to have a radio. He would listen to the commentary of where the planes were. He remembers it all clearly as if it were yesterday. Wonderful link to the Race. He also watched Kingsford-Smith land in Richmond, New Zealand, on a flight across the Tasman.

Thank you for the wonderful site.