On this date in aviation history, November 24, 1971, an unidentified man going by the nom de crime of “Dan Cooper”, hijacked a Boeing 727-100 aircraft (N467US) that departed Portland, Oregon, for Seattle, Washington — a short 30 minute flight north.  The hijacking was fairly momentous.  The man was seated in the rear of the aircraft, which was just a third full.  Shortly after take off, he leaned over to a nearby flight attendant, Florence Schaffner, and slipped a note into her purse.   She assumed it was his phone number and he was lonely — instead, he pulled her close to her and whispered, “Miss, you’d better look at that note.  I have a bomb.” 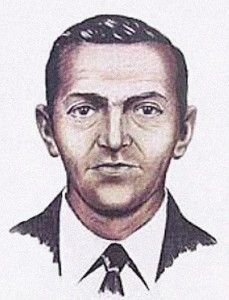 In the case of the “D.B. Cooper” hijacking, there are two basic types of information, what is known and what can be reasonably surmised from the events of that day.  The known events began on the ground prior to the flight — it was the afternoon on the day before Thanksgiving.  A smartly dressed man with a black attaché case walked up to the Northwest Orient Airlines counter at Portland International Airport.  With little fanfare, he purchased a one-way ticket with cash on Flight 305 to Seattle.  The price was $18.52 plus tax, which combined to an even $20.00, a price that would be the envy of any traveler today.  He boarded with the others and the plane took off without incident.  Shortly afterward, he informed Florence Shaffner of the hijacking.

Florence Shaffner’s recollection of the note (he reclaimed it after she read it so the FBI relied on her memory) was that it simply related, “I have a bomb in my briefcase.  I will use it if necessary.  I want you to sit next to me.  You are being hijacked.”  She sat down immediately next to the man and asked quietly to see the bomb.  Rather than bluffing, “Dan Cooper” opened his briefcase slightly so she could catch a glimpse of the device inside.  She later described it as being composed of eight long red cylinders, probably sticks of dynamite, stacked four on top of four with red wires attached the end and to a large battery that could surmise was for detonation.  Trusting what she had seen, she listened quietly to his demands.

“Dan Cooper” discarded his tie, which he left on board (with tie clip). As well, in 1980, some of the money was found along a river bank. Source: FBI

“Dan Cooper” wanted $200,000 in twenty dollar bills of “negotiable American currency”, a term that an American would not likely have used, so one can surmise that he might have been a foreigner or, if not that, an American who was raised overseas — although he had no detectable accent.  He wanted the flight to proceed to Seattle where a fuel truck was to be standing by to refuel the aircraft.  He also wanted four parachutes — two main chutes and two reserve chutes.  He allowed Florence Shaffner to walk to the cockpit to discuss the matter with the pilots  When she returned, he was wearing dark sunglasses.  She relayed that the airline had agreed to meet the demands.  To avoid panic on the plane, the pilots announced over the intercom that due to a small mechanical problem, they would be delayed for landing.  They orbited for two hours over the Puget Sound while the airline (and FBI) collected the money and prepared for the landing.  Unlike the usual hijacker, “Dan Cooper” was not nervous, agitated nor abusive.  Instead, he was relaxed and he even had two drinks (both bourbon and water) and paid his drink tab, telling the flight attendants to keep the change.

Once on the ground in Seattle, the plane refueled and the FBI dropped off 10,000 of the $20 bills he had requested in a large duffel bag.  Unknown to “Dan Cooper”, the bills were all individually photographed to microfilm so that they could be tracked later if and when he ever spent or deposited them.  At first, the authorities tried to give “Dan Cooper” a pair of military type parachutes, with primary and reserve chutes.  He rejected those, asking for civilian chutes instead.  Without any on hand, a local flight school was asked and provided the two pairs of chutes of civilian types — by human error in the rush to get them, one of the two reserve chutes provided was a training chute that had been sewn shut and wasn’t properly rigged for use.  However, “Dan Cooper” didn’t notice, even though it had clear markings on it — later, he would actually use that chute as his reserve, secondary when he jumped.  With all demands met, he released the passengers. 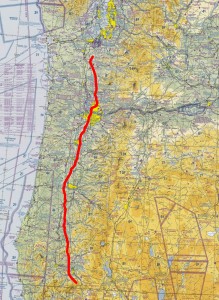 An earlier best Estimate of the Flight Path of “Dan Cooper” on Northwest Orient Flight 305; Seattle is marked in yellow on top; overlaid onto a modern FAA sectional chart (2012) — best estimate of where he came down based on winds would be about 40 miles ENE of Portland International Airport (second large yellow area from the top as marked on this chart). File Size: 750kb+

Finally, at 7:40 pm, the plane took off and headed south on a course dictated by “Dan Cooper”.  Interestingly, he seemed to know something about flight operations because he asked that the plane fly just above stall speed at 100 kts IAS with 15 degrees of flaps and hold an altitude of 10,000 feet.  He demanded that the plane take off with the rear air stair already opened and lowered.  When told that this was unsafe, he flatly informed the airline personnel that it wasn’t dangerous (he knew this with confidence and indeed, it can be done).  He told the airline personnel that he would not bother to argue with them and instead would lower it himself after the plane was aloft.  Everything seemed to have been thought out in advance and clearly he had planned well — what he didn’t know was that the plane was shadowed by two F-106 fighter jets once it took off.  One flew directly above and the other directly below so that they could not be seen from inside the plane.

The Jump into History

Just 20 minutes after take off, at 8:00 pm, the air stair warning light flashed on in the cockpit.  It appeared that, good to his word, “Dan Cooper” had lowered the air stair, knowing where the switch was and how to operate it — though it was placarded with instructions (still, some level of knowledge was needed).  At 8:13 pm, there was a sudden upward lurch of the plane’s tail (later testing in the same airplane determined conclusively that this was caused by the effects of a person jumping off the air stair).  Shortly afterward, the crew verified that he was no longer on the airplane.  They proceeded to make a normal landing.

“Dan Cooper” made one serious mistake that night — he jumped into the darkness and into the teeth of a driving rain storm.  At 100 kts, raindrops hit like little hammer blows, something that “Dan Cooper” might not have expected but which he would have only felt once he had jumped from the plane (the air stair would have blocked the raindrops until he was clear of the aircraft).  The combination of the cold from the altitude as well as the windchill meant that he had jumped into an estimated windchill of -70 degrees Fahrenheit.  With the wet rain, this would have nearly instantly frozen any exposed skin.  Notably, he lacked adequate weather gear and wore just a light rain coat.

One of the parachutes left behind by Cooper and the canvas bag it came in. Cooper asked for four chutes in all; he jumped with two (including one that was used for instruction and had been sewn shut). He used the cord from one of the remaining parachutes to tie the stolen money bag shut. Source: FBI

To this day, the FBI maintains that “Dan Cooper” could not have survived the jump given his clear lack of familiarity with parachuting.  What evidence exists points to someone who had at least some familiarity with aircraft operations.  He knew that he would need to hijack a Boeing 727-100 since it was the only type with an aft air stair could be extended in flight.  This had been tested and proven by the CIA in operations during the Vietnam War and in other classified programs, though that knowledge was not available to the general public.  It seemed to the crew that he was also familiar with flying, since he at one point he readily identified Tacoma from the air based on its lights, though a regular passenger who had flown the route previously would have likely known that too.  Also, at one point, he offhandedly commented about McChord AFB, which stated was just 20 minutes drive from Seattle.  This was interpreted to mean that he had a possible military background.  Some even go so far as to say that perhaps he was previously a load master who was familiar with the CIA’s 727 operations in Vietnam.

Ultimately, all leads turned up nothing.  To this day, “Dan Cooper” and the hijacking of Flight 305 remains an open case.  Both the man and the money are still missing.  In 1978, a placard from the airplane was found in the woods along the flight path — it was the opening instructions for the aft air stair.  Two years later, some of the $20 bills, badly damaged from rolling along the riverbed in the water’s flow, were found on a river bank by a boy scout in 1980 — also within the general area where “Dan Cooper” jumped, though more likely downstream.  They were still rubber banded together in their original order — though some bills were strangely missing.  None of the other missing $20 bills ever appeared at any banks — ever.  Sediments and other research indicate the the bills likely flowed down into the Columbia River from the Washougal River upstream.

Maybe the FBI was right and he didn’t survive the jump after all.  Maybe someday, some hiker or logger will come across his body in the woods.  Only then will we know the end of “Dan Cooper”.

The 727-100 aircraft that was hijacked by “Dan Cooper” was later later sold to Piedmont Airlines and then sold again to a charter company called Key Airlines, which catered to U.S. Government secret operations needs.  As it happened, Key Airlines assigned the aircraft to fly between Nellis AFB and the Tonopah Test Range.  During its contract operations, it moved civilian and military personnel to support testing of the Lockheed F-117 Nighthawk (aka “Stealth Fighter”), a Top Secret program then code-named as “Have Blue”.  After that contract terminated, the 727-100 was retired and scrapped in 1996 in Memphis, Tennessee.

The name “D.B. Cooper” was never used by the hijacker, either before of during the flights, instead, he identified himself as “Dan Cooper”.  How and why did “Dan Cooper” get changed to “D.B. Cooper” in the public mind?

Extra Credit Question:  So who did it?  Who was “Dan Cooper”?