Things have come a long way over the years.  No story illustrates that more clearly than the tale of Wesley May, Frank Hawks and Earl Daugherty who together achieved the world’s first aerial refueling by manually transferring gasoline from one plane to another in 1921.  While undoubtedly most would think that the first refueling was accomplished by the US Army Air Corps via its experiments with the “Question Mark”, that would be wrong.  That aircraft was a highly modified Atlantic-Fokker C-2A that was refueled by a Douglas C-1 and it managed a record-setting 150 hours in the air over the first week of January 1929 — yet that was eight years after the 1921 daring deed of the three men.  So just how was it done?  Well, first you strap a 5 gallon gas can onto your back…. 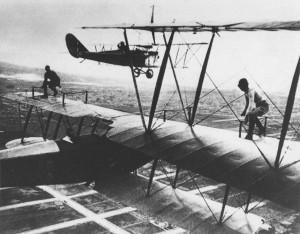 Wesley “Wes” May, Frank Hawks and Earl Daugherty had a simple plan.  First, Wes would strap the gas can onto his back.  Then he would join Frank in the passenger seat of his Lincoln Standard biplane and the two would take off.  Earl Daugherty would likewise take off in his Curtiss Jenny.  Once airborne and at an altitude of around 1,000 feet, Earl would carefully approach the Lincoln Standard while Wes climbed atop the wing and worked his way out to the right wingtip.  Then, as they had done at barnstorming events previously, Earl would come close enough and above the Lincoln Standard for Wes to grab hold of the bottom left wing’s under wing strut on the Curtiss Jenny.  With luck, the three men considered, Wes would then pull himself up onto the lower wing, grab the struts and wires and, as Earl and Frank gently banked away from each other, he would work his way to the front passenger cockpit of the Curtiss Jenny.  In this way, the fuel could be transferred from one plane to another.  As Wes was a skilled stuntman and wing walker, he considered the transfer well within his skills and abilities. 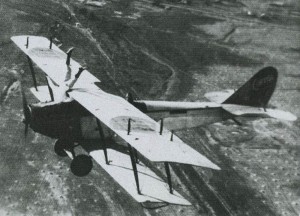 The daring wing walker, Wesley May, does a handstand on the leading edge of the top wing of a Curtiss Jenny, c. 1921.

The idea was that once in the Jenny’s cockpit, Wes would have access to the fuel tank that was located behind the engine.  Thus, Wes would carefully undo the fuel tank’s cap, then set up the gas can spout to enable him to pour the contents in.  Then, being careful to avoid the gas blowing off, he would pour the 5 gallons into the Jenny’s gas tank before sitting down in the cockpit and strapping in.  After that, all that was needed was just a routine landing.  To ensure that the stunt was captured for all posterity, the three also planned to have a chase plane fly behind and take a photograph of the stunt as Wes climbed from one plane to another. 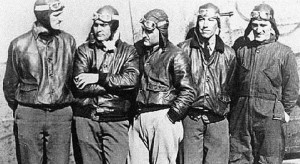 The Achievement and What Followed

As it happened, the plan was almost perfectly executed.  In fact, the only problem encountered was that it took a lot longer than was expected to get the gas poured into the Curtiss Jenny’s gas tank!  The transfer from one plane to another wasn’t that difficult, though Wes had a bit of a harder time of it than the usual simply because he was carrying another 30 pounds of dead weight on his back in the form of fuel.  That required a bit more strength than it usually took to pull himself up onto the Jenny’s lower wing, but in the end, he managed it.  If you’ve ever done chin-ups or pulled yourself up on a set of monkey bars, you know how this works — then consider how much more challenging it would be to put 30 pounds of weight on your back! 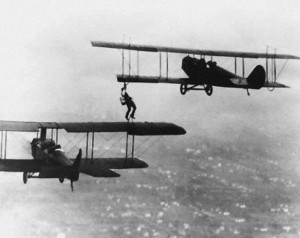 The first aerial refueling! Wesley May can be seen climbing from the Lincoln Standard (lower left) to the Curtiss Jenny (upper right) — the rectangular fuel can can be seen strapped to his back as he dangles from the bottom of the Jenny’s lower left wing. Photo Credit: Peter M. Bowers Collection, Seattle Museum of Flight

With the success of the operation, two things became apparent.  First, aerial fuel transfers were clearly demonstrated to be possible.  Second, it was equally apparent that the method taken by Wes, Frank and Earl was more than a little impractical.  It relied on wing walking skills that were somewhat rare and considered to be the stuff of daredevil barnstormers, rather than professional aviators in military or commercial employment.  Additionally, the amount of fuel transferred was minimal.  As well, the transfer could be accomplished at the slow speeds that both the Curtiss Jenny and Lincoln Standard could together muster.  Therefore, at best the first aerial refueling was little more than a stunt — but then again, who could blame the three men for trying it.  They were barnstormers after all! 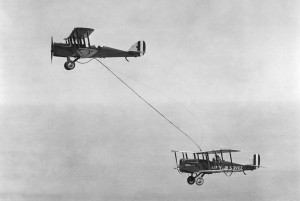 Later Efforts and the Breakthroughs that Resulted

The US Army Air Service didn’t wait another eight years to try out aerial refueling with the “Question Mark”.  In fact, just a year and a half after the 1921 barnstorming trick, the Army did it more properly with two Airco DH-4B biplanes.  One, the refueling aircraft, was flown by First Lieutenant Virgil Hine while First Lieutenant Frank Seifert gently released a fueling hose backward into the wind.  A second Airco DH-4B biplane, flown by Captain Lowell Smith, approached from below and behind while Lieutenant John Richter, sitting in the second seat, grabbed hold of the flapping hose and affixed it to the top of the fuel tank.  Once accomplished, he signaled to First Lieut. Seifert to start transferring fuel.  In this way, on June 27, 1923, the two planes achieved the feat of a more proper aerial refueling.

Just two months later, on August 27 and 28, 1923, the US Army Air Service did it again, this time using three Airco DH-4Bs in a record setting attempt for aerial endurance.  One plane would remain aloft and continuously fly while the other two planes (both “tankers” in modern parlance) flew alongside in shifts to transfer fuel and engine oil.  As it happened, they managed 37 hours of flight time in the record-setting plane, though it required nine aerial refueling efforts during which 687 gallons of gas and 38 gallons of engine oil were transferred (such early planes bled off engine oil out of the exhaust of their radial engines at a rate of about a gallon an hour!). 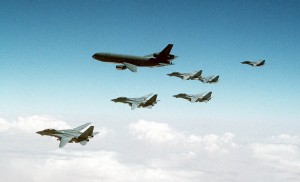 A flight of F-14A Tomcat fighter aircraft from Fighter Squadron 14 (VF-14) and Fighter Squadron 33 (VF-33) rendezvous with an Air Force KC-10A Extender aircraft for an in-flight refueling while on patrol in the Persian Gulf region following the cease-fire that ended Operation Desert Storm — March 1, 1991. Photo Credit: LCDR Parsons, US Navy

From such humble beginnings, aerial refueling has become the key enabling factor of military air power.  Without it, the ability to hit targets anywhere in the world would be nearly impossible.  Another key benefit of aerial refueling is that fighter-bombers are able to take off with heavier loads and far less fuel, by then “tanking up” once at altitude.  This way, modern aircraft can take off with weapons loads that far exceed what was once possible.  Likewise, cargo aircraft can lift off with extraordinary loads and tank up while en route — for every pound of fuel that can be saved at take off, more cargo or weapons can be lifted off into the air. 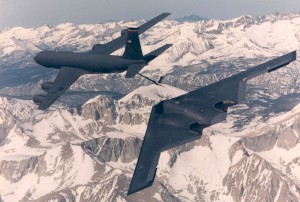 Today’s military air forces are entirely dependent on aerial refueling, yet commercial aviation never would commonly utilize aerial refueling techniques.  Instead, long haul, wide body jets would develop high efficiency engine technologies and great thrust so as to be able to link distant city pairs non-stop.  As a result, one can buy a ticket these days for routine, regularly scheduled flights from Los Angeles to Hong Kong non-stop, as but one example of such capabilities.  In any case, is air-to-air refueling even necessary for commercial airliners?  After all, at some point the passengers are simply exhausted and need to spend some time on the ground anyway.  Would you want to fly in coach seating for more than 17 hours in the back of a modern 747?

In early hours of August 2, 1990, Saddam Hussein’s Iraq invaded Kuwait.  Within hours, the US Department of Defense was planning a response.  Over the following days, as Saddam’s armies mopped up the last Kuwaiti organized resistance, they were preparing to press southward into Saudi Arabia.  That plan was stopped when the first US military forces arrived to Dhahran Airbase on the Gulf Coast on August 7, 1990, with the 1st Tactical Fighter Wing’s F-15 Eagle fighters landing after a non-stop flight across the Atlantic Ocean that had crossed Europe, flown down into the Middle East and across the Arabian Peninsula — all the way from Langley Air Force Base, Virginia.  En route, they did no less than 7 air-to-air refuelings over 14 hours of flight time.  Not knowing what they would see on arrival, the planes were fully armed with missiles and ammunition for their guns.  If the Iraqis intended to fight, the pilots, even if exhausted, were ready to clear the skies and establish air superiority.  As it happened, seeing the arrival of the USAF gave Saddam Hussein second thoughts.  Instead of continuing southward, he stopped at Kuwait and dug in, preparing for “the mother of all wars”.  It was his first of a long series of mistakes yet to come.

Which countries in the world today have the ability to undertake air-to-air refueling exclusively with their own assets?


Which countries in the world today have the ability to undertake air-to-air refueling exclusively with their own assets?


Need help? I have “FROM THE PLANS – THE CURTISS JENNY BY RALPH A. BECK”. Blue Prints #1, #2, AND #3. They are highly detailed blue prints 6 foot long by 3 foot high, even showing the walking beams, they were made in 1970 to 1974 the drawings are from information obtained from the Smithsonian Institute in Washington, DC and the air force museum in Dayton, Ohio also have the wood starter kit, The 1918 Curtiss Standard Jn4-D Military handbook. I have also blueprint #4 showing blowup of the landing gear build and blueprint #5 showing the strut installation to the ribs. The blue prints were sold by Proctor Enterprises whom stopped selling them prior to the build kits which I believe came out in 1983. These plans are of great quality and were rolled not folded and boxed for protection over the years. The paper is of good strength. Proctor was then ordered to stop selling the plans, do to government, and Smithsonion Institute intervention? I want to sell these items and don’t know if E-Bay is the proper avenue. The partial kit I have is for the 87.23 wingspan by 54.66″ long fuse. Please if you have any input as to my best way to auction these I can be reached at “Gruffy47@hotmail.com”


Do you have hi resolution files or photos for these photos?

The best resolution available are what we have published at this time.


I have a photograph of Wesley May taken about fifteen minutes before his fatal parachute jump.


I am giving a lecture on aerial refueling and cannot find Wes May. Does anyone have a photo of him?