The First Jet Landing on a Carrier

On this day in aviation history, November 6, 1945, just a few months after the end of the war, the US Navy achieved the first landing on an aircraft carrier by a jet-powered aircraft when a Ryan FR-1 Fireball landed on the deck of the USS Wake Island (CVE-65), a Casablanca Class ship.  Ensign Jake C. West, USN, was at the controls of the aircraft as part of the US Navy’s first jet combat squadron, VF-41, a unit that had trained in 1945 for deployment against the Japanese.  The war ended before the first American Navy jet fighter could enter the conflict.  Thus, the FR-1 squadron continued testing in the post-war peacetime force as the Navy’s leading experimental fighter unit.  The goal of the squadron was to carrier qualify and test jet aircraft for shipboard operations.  Thus, when Ens. West entered the pattern to land on the USS Wake Island, one would have expected that his landing had been a planned and carefully considered test — it was not.  In fact, the first jet landing on an aircraft carrier was the result of an in-flight emergency.

The Ryan FR-1 was a fascinating aircraft, the result of an engineering solution to the challenges of early jets, which lacked reliability and range.  The FR-1 was nearly unique in that it was a twin-engine aircraft — at the front was a reciprocating engine with a traditional propeller; in the fuselage was a GE jet engine.  The solution was creative — jet engines had excellent performance and speed, yet burned fuel quickly and had serious reliability problems.  Further, jets were efficient at high altitudes and not down low, whereas propeller-driven aircraft were exactly the opposite.  The solution was to launch with both engines, shut down the jet for low altitude performance, endurance and climb, but then start up the jet engine at high altitude where it was most efficient.  Once entering into a dogfight, it was envisioned that the pilot would run both engines, giving unprecedented speed and acceleration, even if at a high cost in terms of fuel consumption.

The Ryan FR-1, however, suffered serious problems that went even beyond the difficulties and reliabilities of early jets.  The landing gear were under-built and prone to failure.  The wing structure was too highly engineered and suffered from cracking and structure failures.  Whereas Ryan had excellent skills in developing Air Force aircraft, Naval carrier operations were not its strong suit — the best fighter planes of World War II in the Navy were built by Grumman, which had the in-house knowledge to produce a solid, well-constructed and highly maneuverable fighter plane for Naval use. 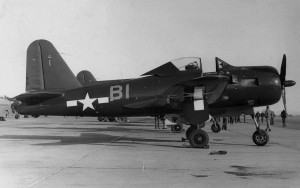 The Naval pilots too had a tendency, apparently based on their training, to land on the main gear to catch a wire.  This worked perfectly with tail draggers, but the FR-1 was a tricycle gear aircraft with a nose wheel.  When the pilots landed on the mains and caught a wire, the nose wheel would slam to the deck abruptly.  Sadly, the aircraft suffered serious failures as a result, including nose wheel collapses — in one case, the plane broke into two parts, with the tail falling off onto the deck and the front skidding to a stop.  Luckily, nobody was killed.

Until November 6, 1945, all of the carrier landings had been made with the piston-engine running, not the jet.  This made sense given that the jet was used for high altitude operations only.  In the first months of landings, nearly half the planes had suffered major mishaps.  By late summer, the Navy had shown the planes at major events, including in Washington, DC, highlighting the design features while studiously avoiding discussion of the flaws.  Chief among the problems encountered was the reliability of the GE jet engine — this was common in all early jets, however, since the technology was so new. 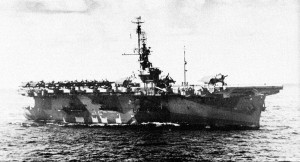 Thus, when Ens. Jake C. West, USN, of VF-41 entered the pattern in his FR-1 Fireball, he intended to make a routine landing on board the USS Wake Island (CVE-65).  As was standard protocol, the jet engine was shut down an he was operating the aircraft using power only from the reciprocating engine and propeller.  It was, for all intents and purposes, a straight forward approach.  Yet it wasn’t the jet engine that failed — it was turned off anyway — but rather the front reciprocating engine.  Suddenly faced with a situation of a windmilling prop, Ens. West quickly feathered it to stop its rotation and reduce drag.  Simultaneously, he was faced with a stark choice — ditching the plane in the water, bailing out, or trying to start the jet engine.  He elected or the latter and commenced the 30 second long air start procedure as his plane descended toward the water. 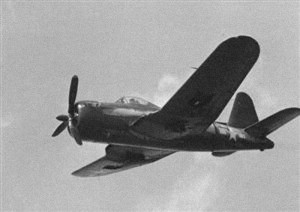 A Ryan FR-1 Fireball in testing over Pax River, its front prop feathered during jet tests.

The jet engine responded perfectly with a successful air start.  Pulling up to altitude, he declared an emergency and shot his approach, jockeying the power to manage his descent rate.  With early jets, throttle response was incredibly slow, so he had to plan ahead for the delays in adding or taking off power.  Nonetheless, despite his youth (he was still an ensign, after all), he established a relatively smooth approach line early on.  This allowed him to smoothly descend toward the deck.  He called the ball, did his line up check and shot a textbook perfect approach.  Meanwhile, the carrier crew set up a barrier net to catch the plane since it was an emergency approach.  As it was, Ens. West caught the last wire and would have made a perfect arrested stop except that the plane hit the barrier anyway. 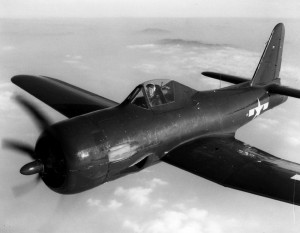 A Ryan FR-1 Fireball in testing.

The Ryan FR-1 Fireball was a dead end for Naval aviation.  With so many structural flaws, after some time it was removed from operational use.  Eventually, all of the planes were scrapped.  The Navy would never again acquire a mixed power (jet and prop) carrier fighter plane, despite its obvious advantages.  Instead, they would turn to Grumman, which would produce the F9F Pantherjet, the US Navy’s first truly successful carrier borne jet fighter.

What was the first PLANNED jet landing on an aircraft carrier, by what aircraft and on what date?


My mom Karen Nansen was going out with West. Later, he was killed by a pilot he was training. While in formation, the trainee suddenly said, “Watch this, Jake!” Then, he pulled his own aircraft up, went inverted and slammed into Jake’s canopy! He never had a chance and did not break formation. At least that is what mom was told.


How this guy called the ball is beyond me, the Mirror landing Sight (later the Fresnel lens) and angled deck did come into service until the early 1950’s. I think HMAS Melbourne the Australian light fleet carrier, was the first ship to have the new three, the angled deck, the steam catapult and the mirror landing sight.


The Americans can tell all the lies they like. However, I believe that Commander Eric Brown from HMS Ocean was the first.


Mr. Fagan – there are no lies in this story: It tells of the first landing on a carrier by an aircraft under jet engine power. Cdr Brown was the first to land an airplane that only had a jet engine on a carrier, which is a different first.


I was once told many years ago that the first U.S. Naval Aviator to land a jet fighter on an American carrier was a Navy Lt by the name of Campbell. He did in an F-2 Phantom. Anybody know anything about this?


What about HMS Ocean? Was that the first instead?
https://en.m.wikipedia.org/wiki/HMS_Ocean_(R68)


One could describe that event as “the first landing on an aircraft carrier of an aircraft only under jet power”, since his other engine failed. But to call the airplane a “jet-powered aircraft” is misleading.


I was told by several family members that my Uncle, Larry Flint, Jr. (USN), was the first pilot to take off and land on a Carrier. He was a Test Pilot who broke the Russian World Altitude Record in 12/06/1959.