Captain Henry “Hammerin’ Hank” Elrod was 36 years old and had been serving in the US Marine Corps since 1927.  He was commissioned as an officer in 1931 and in February 1935, Elrod became a Marine pilot after having served eight years in the Corps as an infantryman.  On December 4, 1941, just three days before the Japanese attack on Pearl Harbor, 12 F4F-3 Wildcats of VMF-211 were deployed to reinforce Wake Island, America’s tiny airstrip coral island that was a jumping off point west from Hawaii into the South Pacific.

When news arrived on December 7th that the Japanese had attacked Pearl Harbor, the small Marine contingent on Wake went onto high alert.  Immediately, four of the F4F-3 Wildcats took off on a combat air patrol.  Visibility was terrible, however.  Just hours after the attacks on Pearl Harbor, the four Wildcat pilots heard reports of enemy bombers attacking Wake Island.  Flying back overhead, they could not find them amongst the clouds — the Japanese had wasted no time in making the attack.  A full complement of 34 Mitsubishi G3M2 Type 96 Nells had departed Roi airfield in the Marshalls.  From the Chitose Air Group, they were experts.  They flew to Wake at 13,000 feet and, just before noon, dove down to 1,500 feet for their bombing runs, surprising the base as they came out of low lying clouds, racing in from the sea. 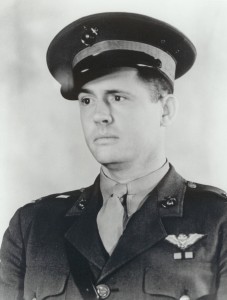 Capt. Henry “Hammering Hank” Elrod, one of the many heroes of Wake Island.

The Damage is Done

Though the Wildcats failed to spot the enemy planes, the Japanese did see three of the Marine fighters before they scooted into the clouds for cover and to make good an escape.  On landing, the four pilots found VMF-211’s flight line in flames.  It was an incredible tally, achieved by the Japanese which had sent a raid of G4M Betty bombers from the Marshall Islands.  Their bombs had been so accurate that they had destroyed all of the VMF-211 planes on the ground, killing a number of the pilots who had tried to scramble.  All that was left were the four planes that had been airborne.

The next day, another bombing raid struck with 27 Japanese Nell bombers.  The Wildcats rose to defend and damaged twelve of them.  Again on December 10, they returned.  Each time, the bombers wracked havoc across the island.  Then, after those three days of relentless bombing, on December 11, 1941 — today in aviation history — a Japanese invasion fleet arrived offshore.  Without delay, they moved in to attack in preparation for landing an assault force on Wake Island’s beaches.

The Japanese force included no less than three light cruisers, the Yubari, Tenryuu and Tatsuta, as well as six destroyers, the Yayoi, Mutsuki, Kisaragi, Hayate, Oite, Asanagi, and two smaller Momi-class destroyer/patrol boats — No. 32 and No. 33.  As well, the Japanese arrived with two armed merchant ships to serve as troop transports, the Kongo Maru and Kinryu Maru, which combined carried 450 elite Special Naval Landing Force soldiers.

The island’s defenses, on the American side, were thin, with just 450 men plus the 55 aviators and ground crewmen who made up the deployed VMF-211 fighter squadron.  For coastal defense, the Marines had six 5 inch guns (these had been salvaged off the World War I era battleship, the USS Texas (BB-35), as well as twelve 3 inch antiaircraft guns as well as a reasonable mix of Browning .50 cal machine guns and .30 cal machine guns.  In other words, just one of the Japanese light cruisers easily outgunned the entire island. 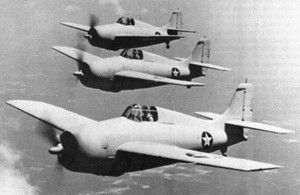 Three F4F-3 Wildcats in the months prior to the battle — a photo taken when newly delivered to VMF-211. Some or even all of these planes undoubtedly took part in the battle.

Yet there were also the four remaining F4F-3 Wildcats — each with two 100 pound bombs mounted on the wings.  As the battle began, they were manned by four Marine pilots.  Major Putnam lead the four Wildcats, with his executive officer, Capt. “Hammering Hank” Elrod, and Capts. Tharin and Freuler.  The fourth Wildcat got off just seven minutes before the Japanese ships began shelling Wake.

From a distance as the force closed rapidly on the island, the Japanese naval vessels opened fire with everything they had.  Shells were falling across the beaches and inland onto the airfield.  The 450 Marines on the beach stood firm and waited — like at the storied Battle of Concorde, they intended to hold their fire until the enemy was very close.  At 4,000 yards, the Marines opened fire with the six 5 inch guns.  Incredibly, “Battery L”, located on Peale Islet, hit the destroyer Hayate with accurate fire.  The shells pierced the Japanese ship’s magazine, which exploded, sending the vessel to the bottom with the loss of all hands.

The four F4F-3 Wildcats had formed up at 12,000 feet over Toki Point, expecting a combined Japanese air attack as had happened on the previous two days.  When none came, they watched as the Japanese ships retreated from the island, canceling the landing attempt — for the time being anyway.  The Marines with their shore batteries had proven to be too accurate and deadly and a number of ships had been hit beyond the one that had sunk. 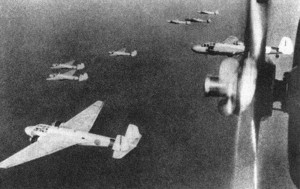 Now, the four Wildcats dove in through a hail of anti-aircraft fire — four planes against the combined AAA batteries of the 12 remaining warships of the “unlucky 13” that had forayed against the Americans on Wake Island.  Each Wildcat carried just the pair of 100 pound light bombs — ineffective against most armored ships.  “Hammering Hank” Elrod aimed his bomb at the fantail of the Japanese destroyer Kisaragi and scored a direct hit, which ignited fires.  The Kisaragi came to a stop.  During strafing runs afterward, however, Capt. Elrod’s Wildcat was badly hit.  He managed to crash land on the beach at Wake Island — the plane would be scoured for spare parts later.

Three Wildcats remained and they began making shuttled attacks against the Japanese ships, rearming, taking off and attacking again and again.  As they pressed one attack, they observed the Kisaragi, which Capt. Elrod had hit, suddenly explode when the depth charge stores stowed in racks on the fantail went off.  The explosion tore the stern off the destroyer and, like the Hayate, it sank immediately with the loss of all hands — 167 Japanese sailors died.

Retreating farther from the island, the Japanese commander called for reinforcements and additional bombing raids against the island’s defenders.  Six hours later, the Japanese bombers returned — 17 G3M2 Nells from the Chitose Air Group.  Two of the Wildcats rose to meet the bombers, flown by Lts. Kinney and Davidson.  Each shot down one plane; together they also damaged an additional 11 planes. 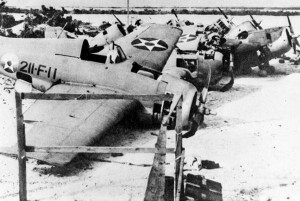 F4F-3 Wildcat fighters of VMF-211, photographed by the Japanese after the invasion of Wake Island. Elrod’s aircraft in which he sank the Kisargi, is in the foreground.

The following day, the Japanese bombers were back.  Most of the four remaining Wildcats were undergoing repairs and just one took off to intercept, flown by “Hammering Hank” Elrod.  Rising alone against the incoming force, he soon counted 22 enemy airplanes — all G3M2 Nells.  Undaunted, he flung his Wildcat into the Japanese formation, firing on them with his guns.  In two passes, he claimed two planes (Japanese records show only one loss that day, however).  The rest as they dropped their bombs with less accurate aim than on the previous bombing raid.

For the next two weeks, the attacks kept on coming.  The ground crews cannibalized airplanes to keep the three flying — then it was two.  There were no supplies and few spare parts.

With the last four Wildcats now out of action, the Japanese Navy returned yet with more ships, including two aircraft carriers.  On the morning of December 22, the Japanese carriers Soryu and Hiryu launched 39 planes against Wake.  The last two Wildcats rose to meet them.  Both were shot down, though one crash landed on the beach. 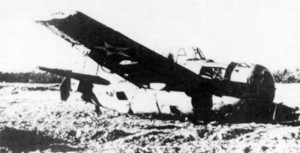 The invasion began in the pre-dawn hours on December 23.  As Wake’s defenders fought tenaciously, the Japanese pressed their advantage and finally put men on the beach.  In the final act of defiance, one Marine and a civilian contractor named Mess Sergeant Gerald Carr and Raymond R. “Cap” Rutledge (a US Army veteran from World War I), dashed to the beach and hurled hand grenades directly into one of the Japanese landing ships, killing and injuring many of the elite special forces within.

Yet in the end, the island’s defenders would be overwhelmed.  The captured men — approximately 90 percent had survived, though many with injuries — were evacuated off the island in small groups and would mostly survive the war in POW camps.  A group of 98 civilian contractors, however, would be executed by the Japanese commander after having served as slave labor on the island (he would be convicted and sentenced to death after the war for that act). 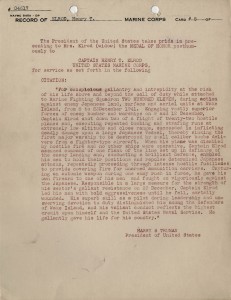 Captain Henry “Hammering Hank” Elrod was killed at Wake Island, not in the seat of his Wildcat fighter plane, but on the beach while commanding the flank against the Japanese invasion force.  Mortally wounded, he directed fire against the invaders to the end.  In the official history of the final battle, it makes note that his command of the flank held the Japanese off for a long time and inflicted many casualties.  It would appear that his first seven years as an infantryman were well-learned.

Posthumously, Capt. Elrod would be elevated to the rank of Major after the war and would be honored as the recipient of the Congressional Medal of Honor.  His widow received the medal from President Harry S. Truman in 1947 at a White House ceremony.

In the end, Wake Island may have been taken by the Japanese, but they never had opportunity to make use of it as a land base from which to attack Hawaii.  Rather than invade and retake the island, the US Navy elected to employ a submarine blockade.  The island’s Japanese defenders spent the rest of the war ill-supplied, starving and under constant air attack as Wake became a regular mission for new aircraft and pilots arriving in the Pacific Theater.

What famous American political figure (before entering politics) flew his first combat mission against the Japanese holdouts at Wake Island?


It should be noted also, that there is still a sail, a small US Navy ship,

This, along with 29 other members of the Employer Support Guard & Reserve (ESGR), Ark. Nat’l. Guard.


I am so proud to call this man my cousin. He really was a true Hero. I would love to go and tour the USS Elrod, but don’t know if I will ever get to. Would also love to go visit his grave. I have had a cousin to die in each of the wars. I come for a long line of Military. God Bless our men and women to have our backs each and every day.