Miss Trehawke Davies was no stranger to flight, though she was not a pilot.  She knew Gustav Hamel well, having flown with him often enough to build a level of trust in his truly exceptional abilities.  On April 29, 1912, she had flown the English Channel to France as a passenger with Hamel, and then returned again on May 21, 1912, from Paris to Eastchurch, England, in Hamel’s Blériot.  Two and a half weeks later, on June 8, 1912, she competed as Hamel’s passenger in the 1912 Aerial Derby, an 81 mile circuit that began at Hendon and then flew to Kempton Park, Esher, Purley, Purfleet, Epping and High Barnett before returning.  The two placed first — initially — but then were reduced to second place after appeal by Thomas Sopwith.  Fittingly, both of the top two pilots flew Blériots, a plane well-favored by Miss Trehawke Davies. 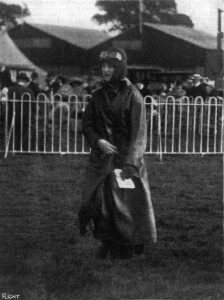 On September 3, 1912, she flew as a passenger from England to Berlin, Germany, this time with pilot H. J. D. Astley, again in a two-seat Blériot monoplane.  In that event, which was well-covered in the press, the pair got lost, but eventually made it.  It was another 15 months before she made it into the papers again — this time as a passenger again with her favored pilot, Gustav Hamel.  The goal was simple — she would ride along when he looped the loop, a maneuver that had only recently been popularized. 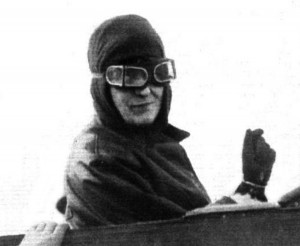 Miss Trehawke Davies, her goggles slightly askew, yet the picture of confidence in the cockpit of a Morane machine. Photo Credit: Flight

And thus, on January 2, 1913 — today in aviation history — she would prepare herself for a truly daring flight.  Yet first, she would wait while Hamel did his own practice flights.  Then she would wait again when he took up an actress — the press had to be kept satisfied, after all.  Finally, it was her time and the reporters from the Royal Aero Club described the circumstances perfectly:

“Previous to looping the loop with Miss Davies, Hamel made a number of loops, semi-loops, and steeply banked turns and many other startling evolutions.  He also took up Miss Gladys Cooper, the popular actress, for a flight.  At four o’clock Miss Davies and Hamel were securely strapped in their seats.  He climbed to a height of 1,000 ft., and at this height executed one loop and what has been called a ‘side loop,’ in which he turns the machine over sideways until it is on its back, and then nose-dived to regain the normal position.” 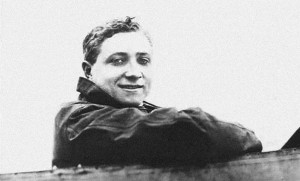 Gustav Hamel sitting in the cockpit of his aeroplane; Cambridge-educated and a member of the British elite, he was the perfect match for Miss Trehawke Davies.

In short, she not only did a loop, but did something of a split-S (if we are to employ the modern term) as well — most likely, based on the description provided, Hamel rolled the plane 2/3 of the way inverted, perhaps to 120 degrees bank angle or something near that, and then pulled back on the stick to do a “sideways” half loop downward at an angle.

Regardless, such maneuvers in a Morane-Saulner (or Blériot or any other such vintage aeroplane) were far from safe.  As anyone who has flown an older or modern replica can attest, the plane is not very sturdy, nor easy to control.  To imagine doing wing-overs, split-S maneuvers and loops in such a plane is simply outrageous, particularly when one considers that no parachutes were worn and — critically, that the maneuvers were done from such a low altitude as just 1,000 feet! 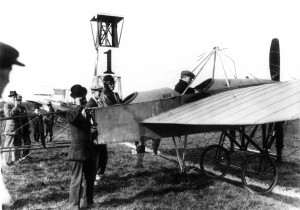 Wearing her goggles and flying helmet, Miss Trehawke Davies prepares for the flight — Gustav Hamel is seated in the front of the two-seat Morane-Saulnier at Hendon. Photo Credit: Flight

Miss Trehawke Davies often confessed to having difficulty sleeping.  She may have had a number of health issues that were not widely known.  She did find, however, that flying in aeroplanes cured her of insomnia, even if only temporarily.  It was a strange cure, but one by which she swore as the perfect remedy.  It wasn’t surprising that the reporters from the Royal Aero Club noted that Miss Davies was somewhat sick at the time of her first loop — and thus it seems that for her, to loop the loop was, above all, just another health treatment in a long line of aviation-based, not quite doctor-approved medical treatments:

“From the passenger point of view this performance was all the more remarkable when it is remembered that Miss Davies had practically left her sick bed to loop the loop, and, in fact, after it was all over she returned home, where her doctor was to perform a minor operation.”

Ultimately, Miss Trehawke Davis would have quite a year in 1913.  Not only would she become the first woman to loop the loop, but she would purchase two more Blériot two-seater machines to fly her around England and the Continent, selecting three pilots to be her aerial chauffeurs, though it was a friendly arrangement (and what pilot could turn down flying such planes for such an excellent benefactor?).  The pilots included the predictably selected Gustav Hamel, as well as B. C. Hucks and James Valentine.  As for Miss Trehawke Davis, her flying would not be for long — she would pass away in November of 1915 at a young age. 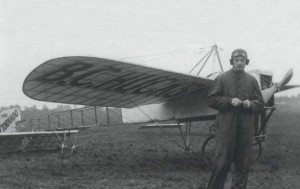 Early flying was a dangerous sport.  Indeed, Gustav Hamel did not live more than a year after the famous loop with Miss Trehawke Davis.  While participating in a flight from France across the English Channel to bring a new Morane machine to England in May 1914, he disappeared.  His body was found — or presumed to be found since it was never positively identified — by some fishermen who did not haul it in to take to shore.  They did, however, go through the dead man’s pockets and make note of his clothing, which matched what he was wearing that day for the flight.  The items found — including maps of London and southern England — as well as the scarf, red belt and other clothing matched well with Mr. Morane’s description of Gustav Hamel’s dress prior to departure.  The body was never recovered, as it was never seen again by any other party after the fishermen let it go.

How did Miss Trehawke Davies die?