“September 3rd dawned dark and overcast, with a slight breeze ruffling the waters of the Estuary.  Hornchurch aerodrome, twelve miles east of London, wore its usual morning pallor of yellow fog, lending an added air of grimness to the dimly silhouetted Spitfires around the boundary.  From time to time a balloon would poke its head grotesquely through the mist as though looking for possible victims before falling back like some tired monster.”

Such prose and brilliant words could only be the work of one man, a Battle of Britain Spitfire pilot named Richard Hillary who wrote not as a practiced author or experienced journalist but rather as a man who was there and lived through the darkest days of Hitler’s and Goering’s aerial assault on England.  While other authors have tried to capture the feeling of those times, perhaps only Hillary truly succeeded.  His masterwork, a book called The Last Enemy, was published in 1941 and immediately became a best-seller throughout England.

Sadly, it would be his only book.  On this date in aviation history, January 8, 1943, Flight Lieutenant Hillary would climb in a cockpit one last time and take off to his death.

F/L Richard Hillary was an Australian posted to RAF 603 Squadron during the Battle of Britain.  From August 27th, the 603 Squadron was transferred to RAF Hornchurch in the south.  Immediately, the squadron was flying in pitched combat against the German Luftwaffe.  F/L Hillary flew  in one of the most famous types of planes involved in the battle, the Supermarine Spitfire.  Born in 1919, he was the son of an Australian Government official and had come to England for his education.  He was no poor student but rather attended Trinity College at Oxford.  He signed on with the Oxford University Air Squadron and RAFVR.   He was but 20 years old at the time he was called into active service and put into intensive training.  He was but 21 years old at the time of the battle. 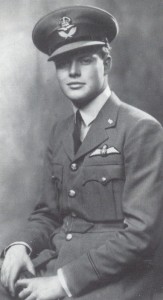 F/L Hillary was still a very new pilot in the summer of 1940, like many of the young men who made up the core of Fighter Command.  He finished his training in July 1940 and was posted to 603 Squadron’s B Flight.  Once there, he had to transition to the Supermarine Spitfire and learn it well, an experience he wrote into his book:

“The Spitfires stood in two lines outside, ‘A’ Flight pilots’ room.  The dull grey-brown of the camouflage could not conceal the clear-cut beauty, the wicked simplicity of their lines.  I hooked up my parachute and climbed awkwardly into the low cockpit.  I noticed how small was my field of vision.  Kilmartin swung himself on to a wing and started to run through the instruments.  I was conscious of his voice, but heard nothing of what he said.  I was to fly a Spitfire.  It was what I had most wanted through all the long dreary months of training.  If I could fly a Spitfire, it would be worth it.”

This passage would end with equal eloquence, as he described how he did indeed fly it well and with complete confidence, quite very much from the start.  He was a natural pilot and it took him little time to learn the handling and quirks of the Spitfire.

Kilmartin had said, “See if you can make her talk.”  That meant the whole bag of tricks, and I wanted ample room for mistakes and possible blacking-out.  With one or two very sharp movements on the stick I blacked myself out for a few seconds, but the machine was sweeter to handle than any other that I had flown.  I put it through every manoeuvre that I knew of and it responded beautifully.  I ended with two flick rolls and turned back for home.  I was filled with a sudden exhilarating confidence.  I could fly a Spitfire; in any position I was its master.  It remained to be seen whether I could fight in one.

In fact, it turned out that he could fight.  From August 27 to September 3, in his first combats at the height of the “finest hour”, as Churchill would later call it, he shot down five planes, claimed another two that were unconfirmed and damaged one more.  He was an ace, even if the RAF at that time did not have the same personal scorecard attitude that the Germans (and later Americans) would bring to the fight.  Yet still, he was a new pilot and thus, in his last combat, he made his first real mistake. 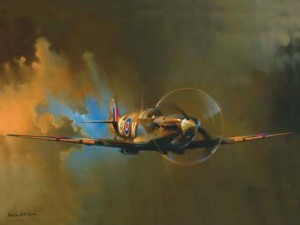 Shot Down in Flames

Veterans of the Battle of Britain often recount that their air war was a deadly game of high speed ambush.  Those who survived flew straight or predictably.  Above all, one never stayed focused on a target for more than three seconds.  If you did that, a Luftwaffe Me 109 would be on you.  As F/L Hillary would write in his book, he recognized that he had become fixated on downing that last plane.  He had stayed too long.

F/L Hillary’s recounting of his own near death experience is an agonizing read, is deeply layered with emotion and regret.  That day, he was to fly the Spitfire XT-M in the number three position in Brian Carbury’s flight of four with Stapme Stapleton on his wing.  Ominously, Hillary’s Spitfire had been damaged in a bombing raid.  Hurriedly, it had been fitted with a new canopy hood.  It was sticky and, even after an hour of work, it would not open properly.  Even as the ground crew filed and hammered on it, a scramble order came.  Without hesitation, he took off.  Just eight planes were still available in the squadron and he knew he had to fly.  Yet equally, he knew that if he was shot down he would likely be trapped in the cockpit.  The battle that ensued was a wild ten minute dogfight against some of the best the Luftwaffe had, yet suddenly F/L Hillary had a fleeting advantage on a target:

Then, just below me and to my left, I saw what I had been praying for — a Messerschmitt climbing and away from the sun.  I closed in to 200 yards, and from slightly to one side gave him a two-second burst:  fabric ripped off the wing and black smoke poured from the engine, but he did not go down.  Like a fool, I did not break away, but put in another three-second burst.  Red flames shot upwards and he spiralled out of sight.  At that moment, I felt a terrific explosion which knocked the control stick from my hand, and the whole machine quivered like a stricken animal.  In a second, the cockpit was a mass of flames:  instinctively, I reached up to open the hood.  It would not move.  I tore off my straps and managed to force it back; but this took time, and when I dropped back into the seat and reached for the stick in an effort to turn the plane on its back, the heat was so intense that I could feel myself going.  I remember a second of sharp agony, remember thinking “So this is it!” and putting both hands to my eyes.  Then I passed out.

As it happened, his plane went into a spin at 25,000 feet.  Unconscious in the cockpit, his  harness undone and the canopy open, he was banged around and got a cut on his head.  His hands were badly burned, his eyelids burned off, and his trouser leg singed through.  Then abruptly, as witnesses later related to him while in the hospital, he had been thrown out of the plane as it spun through 10,000 feet.  Somehow, he regained consciousness and pulled the ripcord.  Though he parachuted to safety and landed in the North Sea, he nearly died from hypothermia before getting picked up.

At an awards ceremony, F/L Richard Hillary, recovering from his burns and disfigured is the third person from the right, behind the WAF.

F/L Hillary went through months of reconstructive surgery.  Finally, he was recovered enough at the end of 1942 to return to a training squadron.  Sadly, with another crew member on board a Blenheim he was assigned to fly (as he was not yet up to speed to take on a single seat, nimble Spitfire), he crashed during a night training flight.  Both men died.

The passing of F/L Richard Hillary is one of many such terrible losses that resulted from the battles fought in World War II.  As a brilliant author, he was not alone — so too passed the author of the famous poem, High Flight, John Gillespie Magee, Jr.  So too passed the famous French author of many books, including The Little Prince, Antoine de Saint Exupéry.  So many others also perished, their names lost to history — and in the end, it was a high price to pay to defeat Hitler and Nazis.  The world is a better place for it, but the cost was very high.


The death of Hillary and the men who fought all those years ago was a tragedy for mankind. Just as the generation that was lost in World War I, we should never forget their sacrifice.