The Nuclear Disaster of Kosmos 954

During the Cold War, the Soviet Union launched a series of reconnaissance satellites into Earth orbit.  Among them were a small number of powerful active radar satellites that were used for ocean surveillance, tracking ships and submarines.  Active radar satellites demand high power and in the 1970s, solar panels were too inefficient to keep them operating.  Thus, to solve this problem, the Soviets decided to launch satellites with on board nuclear reactors.  Though they claimed that the satellites would disintegrate and burn up entirely on reentry, nobody really knew that for sure.  Further, given the mission of the satellites, they had to kept in low orbit, which maximized frictional effects.

Among these satellites was Kosmos 954.  It was launched on September 18, 1977, from the Soviet Union’s famed Baikonur Cosmodrome and, like many Soviet satellites, it was not long lived.  Kosmos 954 suffered a series of malfunctions and eventually all control was lost.  Finally, on January 24, 1978, the unthinkable, inevitable happened — Kosmos 954 fell to Earth.  The Soviet theory that the nuclear reactor would burn up harmlessly during reentry was put to the test in the worst way with a fully operating nuclear reactor containing 50 kg of highly radioactive, dangerous Uranium-235. 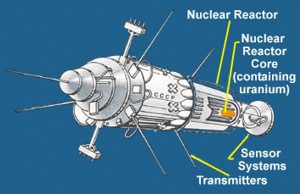 Kosmos 954 satellite in an artist’s rendition with labels showing key parts. Credit: US Department of Energy

During the Cold War, the USA and the Soviet Union launched numerous reconnaissance satellites.  The Soviet term Kosmos refers to almost every satellite in Earth orbit.  There are many types of Kosmos systems and most were short duration satellites for limited military missions.  In fact, since the 1960s, nearly 2,500 Kosmos satellite systems of a wide range of types were launched, everything from weather satellites to high tech cameras and ELINT systems.

Among the satellites, maritime active radar systems were unique since they were large, heavy and required extraordinarily high power levels to operate effectively.  At the time, solar panels were still in their infancy and thus, it made sense to the Soviets to put a nuclear reactor on board, at least from a technical perspective. 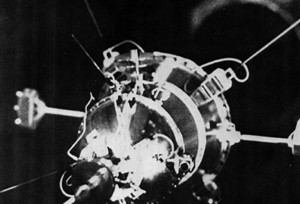 Soviet photo of the Kosmos 954 satellite prior to launch.

The Soviet Claim of Safety

When the satellite’s orbit began to degrade, the US was watching closely.  There were serious concerns about the satellite’s nuclear power plant and the Uranium-235 on board.  In the weeks leading up to the deorbit, Soviet Premier Brezhnev assured then President Jimmy Carter that there was no problem at all.  Certainly, he said, Soviet scientists had studied the problem and Kosmos 954 would burn up in the atmosphere harmlessly.

Notably, the Kosmos 954 satellite orbit was at a fairly high angle, with an orbital inclination of 65°.  This meant that in principle, it posed a threat potentially to almost all of the world’s major population centers.  Furthermore, as with every degrading orbit, tracking down exactly when and where the satellite will finally reenter is a very inexact science, right up to the almost the last few minutes.  The equation was compounded by the rapid orbit rate of the spacecraft, as it completed each orbit in just 89 minutes. 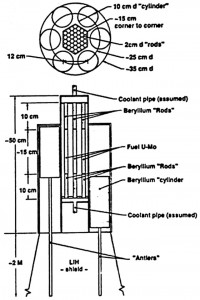 It turned out that the Soviets were wrong about everything to do with the satellite’s reentry.  Early on, as the satellite entered the atmosphere, it broke up into hundreds of pieces, many of them quite large.  The nuclear power plant split open almost immediately.  Uranium-235 spewed out into the atmosphere and contaminated the entire structure of the spacecraft as it tumbled Earthward.  Bits and pieces ablated off into the atmosphere, creating a severe nuclear fallout effect that circled the global for a time afterward.

Ultimately, Kosmos 954 came down across northwestern Canada, on a northeastward trajectory.  Major pieces of Kosmos 954 remained intact and impacted the ground, scattering radioactive debris far and wide.  The bulk of the Uranium-235 itself survived reentry, contaminating the landscape over a 370 mile long path between Great Slave Lake and Baker Lake in  the Northwest Territories, Alberta and Saskatchewan.  Pieces scattered across the tundra in a frozen, sparsely populated region.  However, it was soon learned that contamination levels were dangerously high. The first piece of debris found from the crashed Kosmos 954 Soviet satellite. Photo Credit: US Department of Energy

In the wake of Kosmos 954’s crash back to Earth, scientists realized just how dangerous the situation truly had been.  If the spacecraft had impacted over a major city, for instance, it is likely that tens or even hundreds of thousands of people would have been afflicted with severe radiation poisoning.  A Soviet system designed to eject the power plant and fuel into a higher safe orbit had failed utterly — in the end, it was just chance as to where the radioactive swatch would descend.

After the accident, the Canadian Government undertook a massive radiation clean-up effort.  Under international agreements in effect at that time (and now), those who orbit satellites are responsible for any damages that might result from their reentry back into the Earth’s atmosphere.  This meant that Canada could bill the Soviet Union for the clean up costs — they did, putting forward a $6 million invoice.  It took some time, but eventually the Soviets paid half — just $3 million — that was as good as it would get. 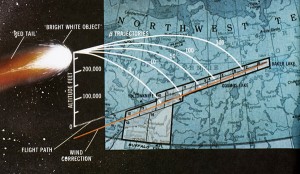 Debris field from the reentry of Kosmos 954. Source: US Government

As for the radioactive substances and Uranium-235 that was spread across Canada’s north?  Despite the extent of the clean up effort, less than 1 percent was ever recovered and properly disposed of.  In other words, up north in the cold and barren wastes, there are still thousands of lost pieces of radioactive, contaminated satellite — somewhere out there, waiting to be found by the few unlucky ones who might travel in those areas.

Did the Soviets ever launch another satellite with an on board nuclear power plant and did any of those also reenter the Earth’s atmosphere like Kosmos 954?


It is not a nuclear satellite in your black and white photo :)))))
It is well-known non-secret research satelite Kosmos-149 “Space Arrow”.
See http://rocketpolk44.narod.ru/kosmos.jpg


Yuri Bezmenov, former KGB propaganda agent, uses this satellite crash as an example of how the American media has been subverted. No complaints or protests about a nuclear bomb falling on Canadian territory.. Skylab was a disaster though.