French and British Planes in Collision in a Fog — Six are Dead and One Dying.
PARIS, April 7 — The Goliath airplane belonging to the French Compagnie des Grands Express Aériens, which left the Paris airdrome at Le Bourget for London at noon today, carrying three passengers, a pilot and a mechanic collided at about 2 o’clock with an English airplane coming from London, carrying mails, but no passengers. All but one person on board both machines were killed. The catastrophe took place in a fog near Grandvilliers in the Oise Department. The machines burst into flames in the air.

So read the New York Times report in America on the morning of April 7, 1922 — today in aviation history — as reporters relayed word received via telegraph of a catastrophic midair collision between two commercial airliners over France.  The events of that day seemed improbable to the point of incredibility, yet they set in motion a new set of rules about air transportation that remain in use, even to this day.

The Farman F.60 Goliath, the world’s first true airliner, had been carrying out regularly scheduled flights between Paris and London since 1919.  By 1922, approximately 20 to 40 passengers per day flew between London and Paris.  Among the various airlines plying the route, a total of six daily flights could be counted.  The French airline involved in the crash that day was the Compagnie des Grands Express Aériens (CGEA).  Basing the bulk of its operations on the Farman F.60 Goliath, the airline had been flying a simple route system that connected Le Bourget in Paris with Croydon in London and Lausanne, Switzerland.  In October 1921, CGEA added a new route to Geneva, Switzerland.  Overall, CGEA was a profitable venture and, as a result, pioneered a new type of air travel in Europe, where passengers bought tickets in advance against a fixed schedule that was flown regardless of the number of seats sold. 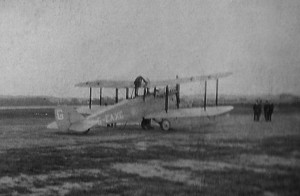 One of the Daimler Airway DH.18A biplanes inaugurating the new route.

In London, following the French model pioneered by CGEA, a new airline had just been formed from the remnants of an earlier failed venture.  This was the new Daimler Airway (note, not Airways, as often misreported in modern history documents).  In February 1921, the former air branch of Daimler Hire was put into new ownership, though it would take some time before aircraft were acquired and the working components of an airline were in place.  In April 1922, just a few days before the events described here, the airline had started its service with newly acquired de Havilland DH.18A aircraft, a single-engined biplane with a cabin for passengers.  The first flights were under contract to deliver the mail to Paris, starting just days before on April 2, 1922.

On the morning of April 7, 1922, the Daimler Airway mail flight from Croydon to Le Bourget took off in its de Havilland DH.18A (G-EAWO) with just one pilot on board, Lieutenant R. E. Duke, as well as a young steward, Mr. Hesterman.  Awhile later, just after the noon bell struck, a Farman F.60 Goliath (F-GEAD) took off from Le Bourget enroute to Croydon, flown by its pilot, M. Mire, with a mechanic on board as well.  Three passengers had purchased tickets on the Goliath, a Frenchman named M. Bouriez and two Americans, a new husband and wife in France for their honeymoon, Mr. and Mrs. Christopher B. Yule, who were flying to London, from which they intended to take a train (probably to Portsmouth) for ship passage back to New York.

Weather was marginal with low hanging cloud and fog and a light drizzling rain.  As instrument flying was yet to be invented and formally instituted, both pilots were flying at the base of the cloud with reference to the ground, thereby unwittingly matching altitudes.  At the time, an informal practice existed that one should offset from navigational landmarks based on the rules of the road, thus, a French pilot would fly up a roadway, offset to the right side and looking down on the road to the left.  Opposing traffic therefore would pass also on the left.  The same informal practice was done in England, though few considered the potential international conflict based on English roadway rules, cars had right hand drive and drove on the left side of the roads!  Thus, the British pilot of the Daimler Airway flight naturally offset to the left, not to the right.  This put the planes on a natural collision course with the cloud base dictating their identical altitude.

One of the DH.18s transferred from Instone Air Line to Daimler Airway for the newly inaugurated air service in April 1922.

As described in the New York Times report, witnesses observed and reported on the events that resulted near Picardie, 60 miles north of Paris near Grandvilliers.  The midair crash happened precisely over the very small village of Thieuloy-Saint-Antoine, which was 17 miles north of Beauvais.  They described the crash thus:

It was about 1:15 when the drone of a big machine was heard by the villagers, who daily see many airplanes flying toward London.  A thick fog covered the whole landscape, accompanied by a steady drizzle of rain.  Suddenly a huge machine appeared as if coming out from behind a curtain at a height of about 150 meters, proceeding in the direction of London.  It was a Goliath.  Hardly had it appeared when a smaller machine shot forth from behind the fog screen, flying toward Paris.  Those watching had not time to think before a sinister crash resounded through the air, and the next thing they saw were masses of débris — broken wood and bent metal — hurtling to the ground.  The two airplanes had telescoped each other, and after staggering blindly for a few short seconds crashed burning to the earth.

One wing of the Goliath, completely torn off, was hurled to the roof of a nearby building, smashing the top completely, while the rest of the machine fell in a field.  The smaller machine fell near it, making a hole a meter and half a deep. 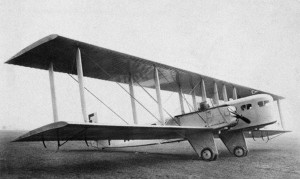 The villagers went immediately to the site of both crashes, very close to each other.  The New York Times article reported on the aftermath in some detail:

In the midst of the wreckage of the Goliath’s luxurious cabin lay the horribly mutilated bodies of the pilot and mechanic.  So badly were their faces gashed and cut that they were rendered completely unrecognizable.  From the wreckage poured forth heavy volumes of thick smoke, but the villagers were able to remove the bodies before the fire destroyed what was left of the machine.  All in the French plane must have been killed instantaneously.

Meanwhile other villagers withdrew the dead body of the mechanic from the wreckage of the English plane (ed., this was actually the pilot).  The pilot (ed., this later turned out to be the steward) of the latter lay about thirty feet away, still breathing.  he was taken to a farm and now lies there without having regained consciousness.

Sadly, the young steward boy would die shortly after from his injuries.

The British extended their condolences with a brief message addressed to the French Under-Secretary of State for Air and the Chairman of Daimler Hire, Ltd.:

In my own name and that of the Air Council I offer you my deep sympathy on the fatal air collision which occurred yesterday, the only accident of this kind in the history of air transport between Great Britain and France.
— Frederick Guest, Secretary of State for Air

A modern airway map depicting the routes between Paris and London in today’s system. Source: SkyVector

In the wake of the accident, the world’s aviation authorities got together to discuss the matters at hand.  A number of changes were recommended and approved.  First and foremost, the midair collision resulted in a universal definition of “right of way” in the air, where planes should offset to the right when flying over roads or landmarks, that on seeing another aircraft approach head-on that they should each turn to the right to thereby avoid a collision and so forth.  As critically, the accident spurred the creation of the world’s first airway systems, the same “highways in the sky” that we currently use today, combining lower altitude airways with the “J-routes” or jet airways of higher altitudes.  Check points (usually at navigational aids) are connected by straight line airways between them, enabling aircraft separation by altitudes on the airways and conversely giving rise to the system of westerly headings on even altitudes (8,000 feet, 10,000 feet, etc.) and easterly headings on odd altitudes (9,000 feet, 11,000 feet, etc.).

For sure, many other innovations in air traffic control would develop over the decades that followed these initial changes.  Each change and addition was learned by trial and error, sometimes adopted universally and sometimes just by one or several civil aviation authorities.  Rules about instrument flying, radio reporting procedures, transoceanic navigational and communications procedures and more were added as aviation extended its technical capabilities and as new airlines and routes were developed.  Sometimes it is hard to see why things are how they are today, but ultimately, behind most of the regulations on the books, there is a story — sometimes it might be a tale of a crash or incident as in this case, sometimes it might be a flash of inspiration that foresees a problem before the price is paid.  Looking back, one could only wish that it there was more of the latter than the former, but the reality is that most of the changes to the ways we do things today evolved as a result of the “hard lessons” learned along the way.  The midair collision of April 7, 1922, might have been the first, but it would not be the last. 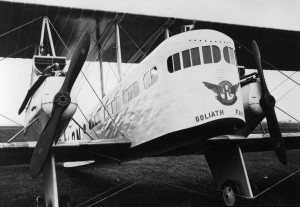 An F.60 Goliath airliner, king of the skies in the 1920s commercial aviation sector.

Both of the two airlines involved continued in operation after the events of April 7, 1922.  Neither suffered from bad publicity, as the accident was considered so unlikely and unique as to likely never recur (on this count, they were wrong as the decades of accidents have since proven).  Two years later, nearly to the day on April 1, 1924, Daimler Airway would be merged with Handley Page Transport, Instone Air Line and British Marine Air Navigation.  Together, they would form the new Imperial Airways which itself set a new and higher standard for air travel in the passenger industry.

As for the changes to air navigation rules made in the wake of the first midair collision between commercial airliners, they remain in effect today, more than 90 years later.  The business of air travel today has never been safer, but that is only through having the learned the lessons “the hard way” all those years ago.


Sorry to be pedantic gents but you are referring to the Speedbird — one word.

Lufthansa has seen fit to keep its Flying Crane logo (designed for one of its forebears in 1919) but the cultural vandals at BA plc ditched the beautiful Speedbird….


As I recall, Imperial Airways later became British Overseas Airways Corporation (BOAC) when they merged with British Airways around the beginning of World War II.
They used the “Speedbird” logo for a very long time. After many more mergers, they finally became the British Airways we all know today.


Very interesting. I have enjoyed a lot of the articles on this site. I live in Honduras, C. A.

Congrats and thanks a lot,