When he entered the Link Trainer room, he saw that there were ten of the machines neatly lined up to either side, a walkway separating the two rows.  Like all new USAF pilots, he was assigned to undergo intensive instrument training in the Link ANT-18, which consisted of a small, airplane shaped wooden simulator with an enclosed cockpit that, when the hood was down, put the pilot alone inside with the flight instruments.  His task was to fly around (if only “virtually”) while the trainer rocked left and right, nose up or down, turning and twisting to reflect his movements on the controls.  Behind each Link Trainer, there was a desk manned by an instructor who gave instructions through an intercom to the pilot through his headsets.  A plotting table with a pen marked on a map the courses flown.

Somehow, as the new pilot was soon to learn, the line never seemed to be where you wanted it to be — or at least just where you thought it was supposed to be. 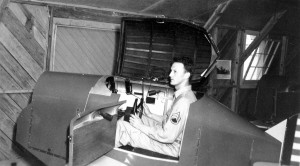 TSgt James R. Schneid at the controls of this early flight simulator at Freeman Field, Seymour, Indiana, while training in 1943.

The idea of the Link Trainer was that you could learn to fly on instruments in the Link first and then, when you had to do it for real, you’d be skilled enough to succeed — and survive.  The place to make mistakes was in the Link rather than in a real airplane where your first mistake would likely be your last.  When you did screw it up in the Link though, the machine would start to spin around and around, simulating a stall and spin in a real airplane.

Looking across the two rows of Link Trainers, he was surprised to see that all of them were spinning.  Just then, the top of one of the Links popped open and the pilot clambered over the side and leapt to the floor.  My God, he thought, that one bailed out!  What am I in for?  He swallowed hard — he was next…. 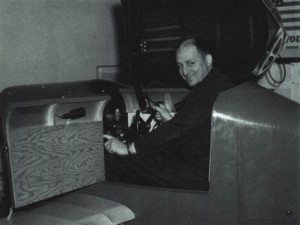 The Origin of the Link Trainer

Today in aviation history, on April 14, 1929, Edwin A. Link filed his patent application for his first Link Trainer, which he called the “Pilot Maker”.  The machine had been carefully developed based on two compatible foundations — first, the Link family business (the Link Piano and Organ Company of Binghamton, New York), which developed bellows, valves and air pressure systems for organs and music players.  And second, Ed Link himself hadn’t had enough money to fly as much as he wanted, so he had built himself a simulator!

Ed Link got his mechanical talents learning to build music players in the family business.  His family’s most extraordinary device being the Link Autovox, which started selling in 1927.  The Link Autovox fit into a large, ornate wooden cabinet — the machine was the size of an armoire.  It was quite complex and served as a type of early “jukebox” (a term that came into use much later).  The Link Autovox was one of the first to offer a choice of ten different 78 rpm records for the paying listener.  These were mounted on ten turntables each with its own tonearm and needle with the apparatus visible through glass-fronted doors!  By depositing a nickle, you could hear a selection played out of the two side-by-side speakers, each shielded behind cloth screens, that graced the top of the cabinet. 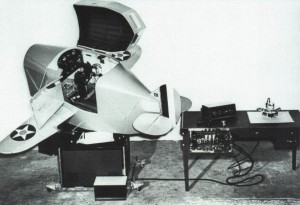 The Link ANT-18 Trainer, as presented in a Link company advertisement to the US Army Air Corps — note the use of the USAAC insignia on the wing and the tail flash!

As a result of his organ bellows experience, Ed Link’s patent filing defined a device that was mounted on a series of bellows that could move the Link “Pilot Maker” around.  Ed Link’s vision was simple — he felt that by using a ground-based training system, he could reduce the high cost of learning to fly.  His own flight training had cost him dearly, money which the Link organ bellows and Autovox business could only barely provide.  Thus, out of necessity and driven by his love of flight, he pioneered the world’s first aircraft simulator.  Thus, his foray into pilot training simulators not the result of a brilliant business sense, but rather the simple fact that he was barely making ends meet.

The Link Catches On

After receiving the patent award in September 1931, Link’s first sales were not to the military or to flight schools, however, but rather to amusement parks!  The little trainers served as entertainment for paying guests who learned the essential techniques of flying while having fun.  After the Link’s popularity grew, a few flight schools expressed interest.  Even so, sales were few and far between.

Finally, in 1934, Link approached the US Army Air Corps with his idea to use his “Pilot Maker” to help train Army pilots.  At the time, the Air Corps was assigned the role of flying the air mail, a mission that had previously been in private hands, but which the government had taken on by order of the US Congress and assigned to the military after a number of irregularities and difficulties with air mail contracts had been uncovered.

The Army’s experience flying the mail was predictably bad.  The generally inexperienced Army aviators were a poor substitute for the veteran pilots of private industry, where the flyers had flown the mail in all weather for nearly a decade.  When pressed into service, the Army aviators learned the hard way that they were insufficiently trained for night flight, flying in the clouds or in bad weather.  Yet the rule of the air mail was that you flew, even if conditions were difficult — the mail “had to get through”.  Predictably, a string of air crashes followed. 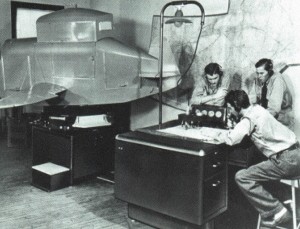 Aircrew training during the 1940s at a Link ANT-18 Trainer.

A demonstration to the US Army Air Corps in 1934 quickly brought a contract for the first six machines.  That contract quickly expanded as pilots gave the device rave reviews — they may not have liked the experience of spinning in to a crash in a Link, but it sure beat spinning into the ground in the real thing!  By the mid-1930s, the Link Trainers were being used by the US Army and the US Navy.  As a result, Ed Link’s business had grown to a substantial size.  He expanded to market the device internationally, where he found the Canadians and British also to be willing buyers, though the instrument panel had to be redesigned for British standards (the so-called D2 model of the Link ANT-18).

By World War II, every Allied nation used the Link — remarkably, his design in the 1940s remained virtually identical in outward appearance to his original patent drawing, though the bellows devices had been considerably modernized.  In the US alone, counting among US Army, US Navy and US Marine pilots, half a million pilots learned instrument flying in the Link Trainer.  It was a revolution that not only cut costs substantially but also saved lives. 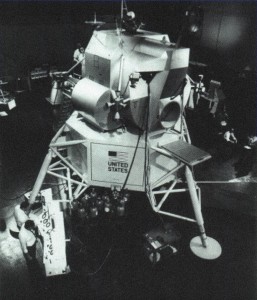 The Apollo Simulator with its control panel to the side, used for astronaut training in the late 1960s prior to the first landing on the Moon.

By the end of the war, Ed Link was secure in his business and quite wealthy.  His firm had played a key role in the massive scale pilot training that took place from 1942 to 1945.  It was a record that he could be proud of.  In all, over 10,000 Link Trainers were delivered during that time.

The Link continued in its pilot training role right up through the Korean War and into the Vietnam era.  In the 1960s, Link was engaged by NASA to build rocketry simulators for the Apollo program, which landed the men on the Moon.

Today, Link’s company is a part of L3, one of the largest defense and engineering companies in the world.  Simulators have gone digital with full-motion hydraulic lifts that turn and twist and feature life size, exact replicas of each specific model of airplane — 747-400 simulators, 737-800 simulators and so forth.  Even various sub-models are built to uniquely represent everything in the real thing — from analog instruments to glass cockpits.

All in all, Ed Link was an extraordinary engineer and brilliant visionary whose design created a revolution in flight training.  The effects of his vision are still felt today.  Looking back, it is hard to imagine that it all began on the shop floor of an organ and “Autovox” company as the dream of a young man who didn’t have money to fly.

In the 1950s, Ed Link phased himself out of the Link Training business and manufacturing, eventually selling the company.  What was the next venture in his life?


He went into undersea exploration, and created the first small submersibles, and seafloor decompression chambers.


What is the source of the photo of the “Aircraft crew training in the 1940s”?
Is it copyrighted?


The source of the image is the US Army Air Forces (US Government), found at the National Archives.


In the mid 1950s, I had the pleasure of “flying” a Link Trainer at FT Rucker while my dad went through Pilot Training there. The Pilots had a nickname for the trainer, not very complimentary as I recall, was it the “Idiot Box”, because it made the student pilots feel like idiots, since it never seemed to go where they thought it did? Does anyone know?


We have been running a simulator museum for more then 30 years now. There, on display you will find more than 15 Link trainers that we rebuilt. D2/ant18/1-CA-1/D4/AT10


Ed Link was also the initiator of the player piano.