One hundred years ago this week, the world descended into the conflict we know now as World War I.  Soon to be called the Great War, it would prove deadly and long beyond anyone’s wildest nightmare.  As the first battles were being planned, the role of aviation was yet to be defined, though those involved with aviation felt confident that airplanes would emerge as an important military asset.  Patriotism, faith and duty drove each nation’s young aviators forward to join in their country’s war effort.

In England, the Royal Aero Club’s newsletter, Flight, carried this important message on the first page of its Notices to Memebers:

On Saturday last, the Chairman of the Club, the Marquess of Tullibardine issued the following notice:–

“Owing to the grave state of affairs on the Continent, it is possible that the British Empire may be involved in a European War.  In such an event, the assistance of every able-bodied man might be required, and it is felt that no class of the community could be of more use to the naval and military authorities than the ‘flying men.’ The Royal Aero Club desires, therefore, to draw up a list of those aviators who, in the event of grave national emergency, might be prepared to offer their services, and such aviators are asked to forward their names and addresses and particulars of aeroplane owned (if any) to the Royal Aero Club, 166, Piccadilly, London, W.  Such a list would not be regarded as official or binding upon anyone, but would be retained in the club so that the information would be readily available in case of emergency.”

A large number of civilian pilots immediately volunteered their services.  Their names and addresses have been forwarded to the Admiralty and War Office, and already many of them have been called upon.  In addition to aviators, a large number of mechanics have sent in their names for service, and these have also been transmitted to the Admiralty and War Office.  Several members have placed themselves and their motorcars at the disposal of the Royal Flying Corps.

Yet at the aerodromes at Hendon, Brooklands, and elsewhere, the reality of the coming conflict was still unclear.  Pilots and mechanics went about their daily business feeling that England would quickly prevail and that they would play some role, perhaps in reconnaissance or, as had been seen in Libya, in light bombing.

As drinks were exchanged, discussions of the coming fight were light — many were worried that the fight would be over before they could take part.  The seriousness of the situation was clear to only a handful.  The government took no chances, however, and prepared for the worst.  Driving the point home was another bulletin, which was ominous enough to the readership, highlighting just how things had changed with the onset of war:

The following is the full text of the notice issued by the Home Office prohibiting cross country flying except within three miles of a recognised aerodrome:—  “In pursuance of the powers conferred on me by the Aerial Navigation Acts, 1911 and 1913, I hereby make, for the purposes of the safety and defence of the Realm, the following Order:  “I prohibit the navigation of aircraft of every class and description over the whole area of the United Kingdom, and over the whole of the coastline there of and territorial waters adjacent thereto.  “This Order shall not apply to naval or military aircraft or to aircraft flying under naval or military orders, nor shall it apply to any aircraft flying within three miles of a recognised aerodrome.

(Signed) “R. MCKENNA, “One of His Majesty’s Principal Secretaries of State.”

Meanwhile, elsewhere in that same issue of Flight, the writers of the Royal Aero Club commented on the call to arms with this simple statement:

In the present crisis of the nation’s history the call to airmen to rally to the defence country which was issued on Saturday last by the Marquis of Tullibardine, and which we republish on another page, needs no comment from us.  We simply record the fact that the answer was prompt, decisive and exactly what we should have expected of the fine young manhood which has devoted itself to the development of aviation.  May God speed them on their errand!

As Europe descended into war, the die was cast.  For the moment, the aviators of Europe had little premonition of the severe challenges ahead.  Instead, they merrily talked of each new advance in flight with smiles and joy, listening to the sounds of Miss Murray on her piano at the club on Hendon’s field.  Many of those who gaily quipped about England’s power and emerging capabilities in the air would soon become casualties. 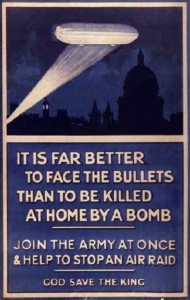 Likewise, the months and years to come would bring rapid development of aircraft and aviation technologies.  New engines, new designs, new techniques, new strategies, new uses and, most chillingly, new weapons would be created specifically for the airplane.  What had been a gentleman’s sport would soon enough be transformed into a bloody, high stakes game of life and death in the skies over the trenches.

Aviation’s age of innocence was coming to a brutal and deadly end.

Who was Miss Murray, the singer and piano player who played at Hendon Aerodrome in the first months of World War I?