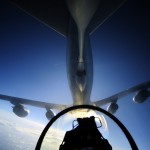 In February 2012, the US Pacific Command undertook a multinational exercise code-named Cope North 2012.  The operation involved aircraft and personnel from the United States, Japan and Australia, who met at Anderson Field, Guam, and undertook nearly three weeks of intensive training and flight operations.
==> VIEW FEATURE STORY 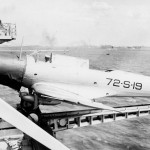 Historic Wings presents its list of ten aircraft wrecks and losses from the World War II era that we believe represent some of the most interesting archaeological aviation treasures yet to be found.  Some aircraft are easy to relocate and recover, while others will be much more difficult — all have historic value.
==> VIEW FEATURE STORY 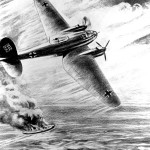 By popular demand, we present another volume in our series of features uncovering artworks by Luftwaffe artists who documented German air power during World War II. As with the previous volume, these sketches are charcoal on paper from the front lines of the Luftwaffe in action — this time featuring the art of Walter Schmidt-Effenberger.
==> VIEW FEATURE STORY