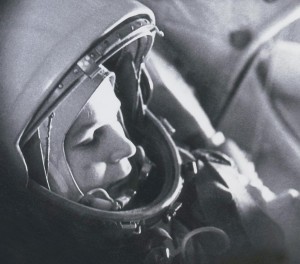 Tereshkova on board Vostok 6.

On this date, 49 years ago, Valentina Vladimirovna Tereshkova became the first woman to rocket into space, launching on Vostok 6 to begin nearly three days in orbit.  In that time, she made 48 orbits of the Earth, reaching as high as 144 miles of altitude before landing at Pavinskiy Collective Farm, west of Bayevo in the Altai Region of the Russian Federation (650 km northeast of Karagandy, Kazakhstan).

Tereshkova was selected because she was the perfect Soviet role model for the space program.  Her father, a tractor driver, was a war hero who had been killed in the conflict with Finland during World War II.  Her mother was a textile factory worker.  Both were honored members of the so-called proletariat.  Like her mother, Tereshkova joined the textile factory and was an assembly line worker.  Unlike many women of her time, however, she was also interested in parachuting.  Her first jumps was at age 22, on May 21, 1959.

Just a couple of years later, the Soviet Union announced a competition among women for who would have the honor of being the first to rocket into space.  This was the idea of the father of the Soviet space program, Sergey Korolyov, the chief Soviet rocket engineer.  The requirements for application were simple:  perspective woman cosmonauts had to be parachutists who were under 30 years of age, measured in height under 170 cm (5 feet 7 inches) and weighed less than 70 kg (154 pounds).  From among 400 applicants, Tereshkova was selected with five others to form the first women’s space corps. Ultimately, she was selected to rocket into space first.

Her flight would not be uneventful.  Control problems caused the craft to ascend when given the command to descend, which Tereshkova had to troubleshoot within the capsule itself in order to successfully reenter the atmosphere.  Like Gagarin and the other early Soviet cosmonauts, she did not land in the capsule but rather parachuted out once the capsule was low enough for a safe exit.  She nearly was blown into a lake on landing.  Afterward, a gust of wind filled the chute and pulled her over, giving her a bruise on her nose.

At age 26, she became not only the first woman in space, but the youngest and the first civilian (non-military) person to fly into space.  After her return, she was inducted into the Soviet military, which she stayed in until her retirement — becoming the only woman to attain the rank of General in either the Soviet Union or in post-Soviet Russia (a record she still holds).

While the Soviets made a grand gesture for equality by taking the lead in putting a woman into space, it was hollow in the end.  After Tereshkova’s flight, none of the other women in the first women’s cosmonaut corps would ever fly.  It would take 19 years and a new generation of women in the Soviet Union for the second to be selected to fly — Svetlana Savitskaya.

As for Tereshkova, with the disbanding of the women’s cosmonaut corps in 1969, she entered Soviet politics, rising to become a leading member of the Communist Party and member of the Central Committee.  Despite her staunch communist roots, she remains popular even today as a leading women’s figure in post-Soviet Russia. 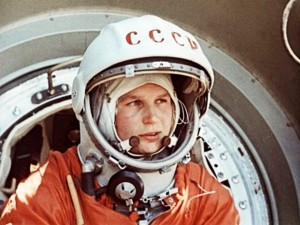 When Yury Gagarin took his famous flight and became the first man to fly into space, he inadvertently inaugurated a strange and unique good luck tradition in the Russian space program.  The suit-up had taken so long that after being bussed out to the launch pad, he realized that he had to urinate.  Without a second thought, he turned and urinated against the bus tire.  Since that time, thinking it a good luck charm, every cosmonaut would follow suit, urinating on the bus tire before boarding the spacecraft.  Even Tereshkova, the first woman in space, squatted down.  This remains an unbroken tradition in the Russian space program that continues to this day.