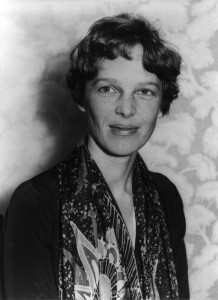 On this date in 1928, Amelia Earhart became the first woman to fly across the Atlantic Ocean — as a passenger, not a pilot.  How this came to be is something of an interesting tale — and Mrs. Amy Phipps Guest, a 54 year old socialite, might well have been the first, had her family not convinced her that the risks were too great.

Inspired by Charles Lindbergh’s solo flight to France the year before, Mrs. Amy Guest used her considerable resources to purchase a plane, hire a crew and start planning for her flight to ride along to Europe.  Her chosen aircraft was a good one — a Fokker F.VIIb/3m that had been built and modified for Richard Byrd for his Arctic and Antarctic expeditions.  Christened the “Josphine Ford,” it was the first aircraft to reach the North Pole, a journey which took 16 hours and involved a 1,535 mile return flight (flown by Floyd Bennett and Richard Byrd in May 1926).  The plane had been readied for the exploration of the Antarctic when Byrd’s sponsor, Henry Ford, had other ideas.  He asked the famous Antarctic explorer to fly in a Ford Trimotor instead, thus carrying the Ford brand southward into Antarctica and onto the front pages of the newspapers.

Therefore, Mrs. Guest had the good fortune to purchase Byrd’s aircraft.  She then recruited Mr. Wilmer Stultz, as her pilot, and Mr. Louis “Slim” Gordon, as her copilot and mechanic.  Then she started to prepare publicity for the event, using her high society connections to ensure that she had the right attention to the venture, bringing on an expert at public relations, George Putnam, the famous publisher. 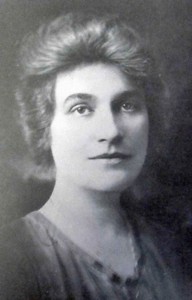 At that point, however, Mrs. Guest’s family intervened to convince her that the journey was too dangerous for a woman of her age.  At the time, only a few dozen pilots had yet succeeded in making the crossing and many others had simply disappeared, including a few of well-known names of the day.  She gave in to her family’s wishes and decided that another woman should take her place, with her sponsorship.

Mrs. Guest recognized that this would be an undoubtedly historic flight, equal in public attention to the crossing of Charles Lindbergh just one year earlier in 1927.  Therefore, she sought out, in her words, “another girl with the right image.”  She enlisted George Putnam, the famous publisher, and another pilot, Capt. Hilton H. Railey, to advise her.

From among the potential candidates the team gathered for review, the name of Amelia Earhart caught Mrs. Guest’s eye almost immediately.  Earhart was already a rising star among early women aviatrices and had over 500 hours of flight time, all without major incident or accident.  Further, she was experienced with the press, an important factor since the flight would generate significant newspaper interest.  Earhart even wrote articles for a local Massachusetts newspaper.  She was rapidly becoming a celebrity of sorts.

Earhart looked the part too — tall and thin, in some ways not unlike Charles Lindbergh.  She was confident but not overly flamboyant.  Finally, Earhart hailed from an upper class family and had the right social graces in Mrs. Guest’s eyes.  In other words, Earhart fit the requirements perfectly.

Amelia Earhart was surprised to receive a phone call in April 1928, from Mrs. Guest’s agent, Capt. Hilton H. Railey, who bluntly asked, “Would you like to fly the Atlantic?”  Of course she said yes.  As everything was already well-prepared, the flight would take place just two months later.  The aircraft that would make the journey, Mrs. Guest’s modified Fokker F.VIIb/3m, was aptly named “Friendship.”  Modifications that were made as advised by Capt. Railey, with Mrs. Guest’s sponsorship, included adding float pontoons for landings on the water, changing the wooden propellers out for metal controllable counterweight props, modifying the original wing with an extended span F.VIIb wing, plus installing a new windshield. 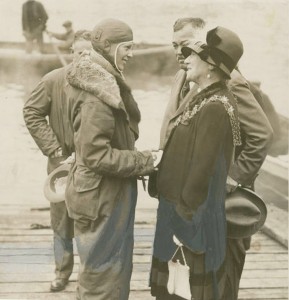 Amelia Earhart is greeted by Mrs. Foster Welch, the Mayor of Southampton, on June 20, 1928, on her arrival at Woolston.

On June 17, 1928, the Fokker Friendship took off into history with Amelia Earhart riding on board.  First, they flew from Trepassey Bay in Newfoundland up the coast of Canada.  The aircraft was forced to land at Halifax, Nova Scotia, when fog made it impossible to continue.  With conditions improving, the pilots took off again and flew the rest of the way to the United Kingdom.  They landed at Burry Port in Wales (near Llanelli) when their fuel was nearly exhausted.  After refueling, the following day they proceeded to Woolston in Southampton, England, where they were met by large crowds and the assembled press corps.

In an interview soon after landing, Amelia Earhart told the press, “Stultz did all the flying—had to. I was just baggage, like a sack of potatoes.”  She also commented, “…maybe someday I’ll try it alone.”

Indeed, she did in 1932– just four years later — cementing her position as the best known woman pilot in the world, a reputation and celebrity status that she earned in that 20 hour flight, as a “sack of potatoes” from the United States to the United Kingdom.  Today, however, most passengers to Europe don’t get celebrated with a ticker-tape parade in New York, a reception at the White House, and global fame.

When Amelia Earhart finally flew the Atlantic as the pilot in 1932, like Lindbergh she did it solo in a single engine airplane.  Today with modern technology, navigating from the United States to Europe is not difficult — inertial navigation systems and GPS make it easy and the exact position of the airplane is displayed on a moving map in the cockpit.  However, in 1932, Amelia Earhart flew the Atlantic with little more than a compass, an airspeed indicator and a watch.  For her flight, she used forecast winds to determine the best heading to fly on each leg of her trip.  With inaccuracies in airspeed and weather, when she arrived, she wasn’t sure if she was in Scotland, Ireland, England Wales or France.  She landed in a farmer’s field and immediately attracted the attention of one of the men working there.  She called out to him, “Where am I?”  The answer she got was perhaps a bit more precise than she was looking for as the farmer answered, “In Gallagher’s field. Have you come far?”  As she worked out shortly afterward, she had landed in Londonderry in Ireland.


Quite rare info you have shared with us. Thanks for sharing it.