Aftermath and Cover Up of the Shootdown

Qaddafi had escaped clean and clear from the aerial assassination attempt.  He would live on, the penultimate survivor, until Libya’s “Arab Spring” of 2011.  France would never speak publicly about the events of that night. Italy too would choose a policy of silence and cover up. The United States would remain silent, being an outside, non-European observer. Amidst the deafening silence from official sources, the media would call the loss of Flight 870 the Ustica Massacre (“Strage di Ustica” — after a nearby island in the Tyrrhenian Sea).

Then, on July 18, 1980, fully 21 days after the shootdown, the wreckage of the Libyan MiG-23 was located in the Sila Mountains.  The body of Libyan Pilot Ezedin Koal was still strapped to the ejection seat, his identity revealed by the name imprinted on his helmet.  Officials were none too pleased when two news reporters were dispatched to document the crash site.  They ordered that both be arrested and held until they agreed to turn over their film.

Despite these further efforts at cover up, the press would later uncover that the Libyan pilot’s body was inexplicably decomposed, as if consistent with the body having died three weeks earlier, at the time of the downing of Flight 870. This linked the two events and added yet more fuel to the fire of press interest.  The pilot’s body would be repatriated to Libya after having been buried for a time in Italy.

The alleged cover up would extend yet further when radar tapes that documented the events of that night were somehow erased or disappeared.  This may have been coincidental, but again, it was just another in a long series unlikely coincidences.  Likewise, due to the roadblocks and cover up, it took nearly nine years for the recovered pieces of the DC-9 to be examined and written up into a formal accident investigation report — an unfathomably long time in the field of aviation.  The report flatly concluded, “All available evidence considered unanimously confirms that the DC-9 incident was caused by a missile that exploded near the nose of the plane.  At the present time, the evidence is insufficient to specify the type, origin and identity of the missile.”

Aviation Week and Space Technology bolstered the report by publishing that the damage to the airliner’s fuselage was consistent with that caused by a continuous-rod missile warhead as employed in air-to-air missiles.  Any doubts of military involvement in the events were rapidly fading — but whose military?  Were the Libyans responsible for an act of air-to-air terrorism?  Was it someone else? Soon, the political left took up the banner that the Americans and the US Navy had accidentally shot down the plane.

Even more chilling, though perhaps once again coincidental, a number of those who were working that night and who would have been key witnesses to the events afterwards would die in strange circumstances.  The commander of the Italian airbase from which the intercepting Italian F-104S fighter jets had launched would die suddenly in a car accident.  Two of the radar controllers who witnessed the full picture of the events of that night on their screens would commit suicide by hanging (an odd personal choice given the pain involved).  Another radar controller also died, but this time of an unexpected heart attack — he was just 37 years old.  A fourth air traffic controller who had direct knowledge of the events of that night was later found murdered.  Finally, two of the three Italian Air Force pilots who had intercepted the Libyan MiG-23 died in a midair collision during an air show at Ramstein AB in Germany.  For many conspiracy theorists, these deaths were all too coincidental. 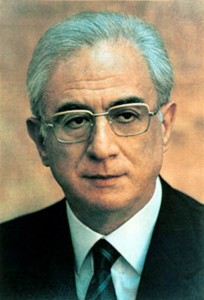 Francesca Cossiga, former President of Italy, who released the bombshell statement highlighting the role of France in the shootdown.

Finally, a formal inquiry was launched by an Italian judge named Rosario Priore, but even then, his efforts were stymied by roadblocks put up by NATO and Italian political and military figures.  He would make note of the apparent cover up in his report and subsequently, four Italian generals would be charged with the crime of High Treason for obstructing the investigations.  With the expiration of the statute of limitations, the cases would be dropped.

In July 2006, the recovered fragments of Flight 870 were re-assembled and brought to Bologna from Pratica di Mare Air Force Base near Rome.  A year later in June 2007, the reassembled fuselage was placed on public display at the newly opened Museum for the Memory of Ustica in Bologna.  It stands as mute testimony to what was probably an attempted assassination that went wrong — terribly wrong — and the deaths of 81 innocent civilians and one Libyan MiG pilot.

Then in 2008, the former President of Italy, Francesco Cossiga, stepped forward to confirm that Itavia Flight 870 was downed by French fighter jets.  His admission was a bombshell, yet still, the fine details of the events of that night were not released.  Shortly afterward, France was served with a claim for damages.  Less than two years later, Cossiga would die of respiratory problems.

Finally in 2011, the Italian courts would order $127 million in reparations be paid by the Italian government to the families of those who perished.  The true story of what happened in the night skies over the Tyrrhenian Sea, is finally coming to light.  With the release of the latest records from the Libyan government archives, the only question remaining is when public officials will finally accept responsibility for what happened — to confirm or deny the sequence of events claimed in the Libyan documents.

After 32 years, it seems that enough time has passed for the truth to be revealed.

The events described above are based on a mix of fact, carefully made judgments from public sources and — to a large extent — reports recently uncovered in Libya.  This story assumes the Libyan documents to be valid — yet it is also possible that they were fabricated by Libya’s own secret police to garner the favor of Qaddafi. As a reasonable disclaimer, we must state that portions may be inaccurate.  If and when known, updates will be published and corrections made. At HW, we sincerely hope that the final official release will disprove French government complicity in the deaths of those aboard Flight 870.

Ultimately, however, we must also accept that we may never know the full truth of what happened during Italy’s Darkest Night.


In your article, you talk about secret documents from Libya. We can’t see them! How can we believe you if you’re not giving any evidence?