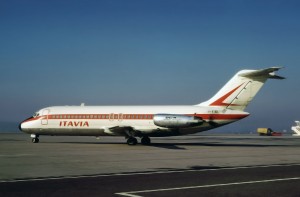 Photograph of I-TIGI, the DC-9 downed off the coast of Ustica on June 27, 1980. Photo taken in Basilea in November 1972.  Photo Credit: Werner Fischdick

For years, people have wondered exactly what happened to TWA 800.  What is known is that on the night of July 17, 1996, a Boeing 747 was lost off the coast near East Moriches, New York — and all 230 people on board died.  An extensive accident investigation followed but was inconclusive as to the cause of the crash.  To this day, many maintain that TWA 800 was no accident, claiming that the aircraft may have been accidentally downed by a USAF air-to-air missile.  Officials are quick to discount such theories as preposterous.  They point out that a cover up on such a scale “could never happen.”  Except that it did, just 17 years before, to another civilian airliner in another country.

The Dark Story of Itavia Flight 870

On the night of June 27, 1980, Aerolinee Itavia Flight 870 (a DC-9 registered as I-TIGI) departed Bologna, Italy, en route to Palermo, Sicily.  On board were 77 passengers, two pilots and two flight attendants.  Of those, 64 were adult passengers, 11 were children aged between two and twelve years old and two were children under the age of 24 months.

As usual, Itavia Flight 870 proceeded uneventfully on its regular route southward off the coast of Italy.  Then, at 8:59 pm, the aircraft suddenly disappeared off the radar screens of Italian Air Traffic Control.  No report of trouble or declaration of an emergency was received from the pilots — one second the plane was there and the next, it was gone.  All 81 souls on board died as pieces of the aircraft fell into the sea.

At first, it seemed that the circumstances of the loss didn’t make sense — the aircraft had been flying along perfectly and then, quite inexplicably, it had exploded in midair with the loss of everyone on board.  In response to questions from the media, government officials offered that Flight 870 might have been downed by a terrorist bomb.  Initially, that explanation made some sense, but then no terrorist organization stepped forward to make a claim of responsibility.

Unsatisfied, the media returned to ask more questions — and as if by some order from above, officials suddenly went silent.  No additional information was forthcoming.  This in turn fed media suspicions that the real story was being kept from public view.  Sadly, they were right.  Everywhere they turned, doors were suddenly closed.  It seemed as if nobody was willing to talk about what had happened.

Even more ominously, it was soon discovered that tapes of radar plots had disappeared or had been somehow erased.  Other records were also missing or suddenly unavailable.  Even more chilling, key witnesses began dying in strange circumstances — car accidents, suicides, and even a heart attack.  What followed was the beginning of a decades long cover up, one that would go to the highest levels of no less than three governments.  It is a cover up that is still in force even today.  The events played out like a bad Hollywood movie, except that it was altogether real.

Out of the Darkness, into the Light

The story of Itavia Flight 870 is a dark tale of missteps, errors, and cover ups that involved no less than three governments on one side and a hostile government on the other — Muammar Qaddafi’s Libyan dictatorship.  The details of what happened that night still remain largely a mystery, but key pieces of evidence have recently emerged that shine light onto a long held secret.  With the fall of the Qaddafi government in 2011, the archives of Libyan state secrets have been partly opened.  There, amidst countless stories of terrorist plans, international ventures and terrible misdeeds are the reports detailing the night of June 27, 1980.

If the Libyan records are to be believed, this is what happened to Itavia Flight 870….

The loss of TWA 800 remains a perplexing mystery even to this day.  The best assessment, based on thousands of hours of study and an expensive recovery of the vast majority of the pieces of the aircraft, is that a spark in one of the fuselage fuel tanks, empty at the time, ignited jet fuel vapors, resulting in a catastrophic explosion that literally blew the airplane out of the sky.  The problem is that the exact cause of the spark has never been determined.  The wreckage points clearly to a single event — there is no doubt that the fuel tank exploded outward from within.  Yet the 747 had been flying for decades and never before had a central fuel tank exploded.  In fact, while theories abounded as to what might have caused the first spark, nothing was ever conclusively proven.  Today, the wreckage of TWA 800 remains housed in a hangar and is studied, over and over again by accident investigators.  It stands as mute testimony that sometimes, no matter how much we want to know, the answers will still elude us.