On this day in aviation history in 1929, the Dornier Do X took off for its first test flight. The aircraft was an incredible seaplane, sporting twelve engines that were mounted on six pylons above the wing (each pylon had two engines, one mounted with a front-facing propeller and the other mounted as a pusher). The aircraft had a wingspan of slightly more than 157 feet and a maximum take-off weight of 56 metric tons, making it the largest flying boat of its era and one of the biggest of all time. It pioneered trans-Atlantic air travel in a time when each flight across the ocean was a newsworthy event (Charles Lindbergh had made his historic flight from New York to Paris just two years earlier).

The Do X was termed a Flugschiff (flying ship) and as such, the interior design and passenger accoutrements of the Do X were influenced by cruise ships, which set a high standard for travel. Flight controls were also like ships, with the engineer managing the twelve engine throttles, mixture settings and performance while the captain would call out throttle settings from the flight deck.

Also like a ship, the aircraft featured a three-deck design. The top deck included a cockpit for the pilots, a small navigational office, plus an engineering station for engine control and a dedicated radio room. The main deck below held a smoking room, a bar, and a dining room with seats for 66 passengers. These could be converted to beds for night flights — clearly, the idea of safety in the event of an accident had not yet occurred to aircraft designers. Toward the rear of the plane on the main deck was an electric galley for food preparation, lavatories for passenger and crew use, and cargo space. The lower deck held fuel tanks and nine watertight compartments for floatation.

Critics claimed that the flying boat would prove unable to lift its passenger load. Indeed, some of their comments had merit as the aircraft was underpowered despite its twelve engines. In fact, the great Flugschiff seemed more at home on the waves than above them, since it could not climb beyond an altitude of 425 meters (1,400 ft) while in its original engine design configuration of twelve 524 hp Siemens-built Bristol Jupiter radials. After 103 test flights, the aircraft was refitted with the more powerful 610 hp Curtiss Conqueror water-cooled 12-cylinder inline engines. This allowed it to achieve what was deemed sufficient altitude for a trans-Atlantic crossing — just 500 meters (1,650 feet) above the waves! 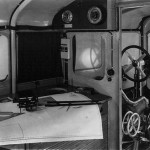 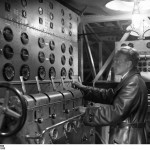 To quell critics, Dornier put on a demonstration flight that set a record for the number of passengers flown, rather than simply the standard luxury configuration of 66 passengers. On October 21, 1929, the Do X took off with a load of 150 passengers plus the crew of 10, and, in typical ship tradition, it also turned out that there were 9 “stowaways” on board at take-off! The flight was uneventful, if by modern-standards somewhat atypical. The great Flugschiff was aloft for at least 40 minutes (some publications claim a 53 minute flight). While flying, passengers were asked to move to one of the sides whenever the plane needed to bank and come around in a turn. It is hard to imagine a more unsuitable control configuration — the pilot barking orders to the engineer for more or less power (“All ahead two thirds!”) and then asking the stewards to usher the passengers to the left side of the plane so they could turn around and head back to Lake Constance for landing.

Ultimately, only three of the great seaplanes were built. This was in large part due to the poor state of the global economy and as well due to a number of non-fatal accidents. One incident showed the impact of the pilot’s lack of direct flight control and resulted in the plane landing hard and breaking off its tail. Nonetheless, from among the many shorter flights the Do X completed, it is the single great trans-Atlantic flight from Friedrichshafen, Germany, to New York that is the most memorable. 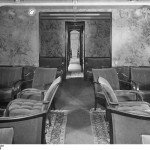 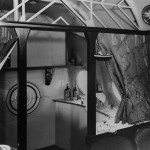 Departing on November 3, 1930, the Do X first took off from Friedrichshafen and flew west to Portugal. There, the entire venture was temporarily stopped when an accidental fire caused extensive wing damage. The plane would be laid up for nearly nine months while undergoing repairs. Thereafter, the Do X continued down the west coast of Africa before it flew across the South Atlantic to Natal, Brazil. Then it proceeded up the east coast of South America and along the coastline of the United States to finally arrive in New York on August 31, 1931. For the next nine months while its engines were overhauled, the aircraft would serve as a showpiece of German technology to thousands who would come for tours of its interior. The return flight would take just three days, departing Glenn Curtiss Airport (known nowadays as LaGuardia) and traveling via Newfoundland and the Azores to Müggelsee, Berlin. On arrival, it was greeted with great fanfare and celebration.

For the few years the plane was operational, it flew passengers infrequently as the Dornier company struggled to stay afloat in the depressed economy after the 1929 Great Depression. Nonetheless, the Do X more than rivaled the experience of cruise ships and the great airships of the day, like the Hindenburg. In many ways, the great Flugschiff pioneered modern air travel and established high expectations for passenger services on long haul commercial flights. Perhaps someday, an aviation museum will recreate the deck plan of the Do X for use as a museum cafe and restaurant (are you hearing me yet, Kermit Weeks?) — most certainly, the era of the great Flugschiff is something worth recalling.

In the period between the two world wars, only the Russian Tupolev ANT-20 Maxim Gorky would exceed the size of the Dornier Do X seaplane. The ANT-20, however, featured only eight engines, but sported a larger wingspan. The Russians also equipped the aircraft with a powerful radio transmitter so that they could broadcast propaganda from the skies as the plane flew over the Soviet Union. With an on board photo laboratory, printing presses, a library and a film projector, it was a veritable propaganda machine for Stalin’s vision of a new Russia. On May 18, 1935, however, the dream of the ANT-20 came to a fiery end, when 45 people, mostly family members of those who built the plane, were killed as the pilot attempted a loop in the heavily load behemoth at an airshow! In typical Soviet fashion, the huge plane crashed spectacularly before a large crowd.

1 thought on “By Flugschiff Across the Atlantic”