On this date in aviation history in the year 1990, the prototype F-22, known as the YF-22, made its first flight.  Approximately seven months later, it was selected by the USAF under its Advanced Tactical Fighter (ATF) competition, beating out its rival, the Northrop–McDonnell Douglas YF-23.  What followed was 14 years of continuous testing, improvements and optimization — at which time the USAF declared that the aircraft had reached Initial Operational Capability (IOC).  The first twelve F-22A Raptor aircraft entering service at Langley AFB with the 27th Fighter Squadron of the 1st Fighter Wing in that year.  While initially the program was slated for 650 aircraft to be acquired, ultimately, by the time the aircraft reached IOC, the acquisition totals had been reduced dramatically.  The reason?  Put simply, the aircraft was designed to counter the ever-advancing threat of the Soviet Union.  When the flag went down on the USSR, the need for the aircraft was dramatically curtailed — yet that didn’t stop Lockheed from producing the finest fighter in history.  And so, on this, the 22nd Birthday of the F-22’s first flight, we sit back in amazement not just at the capabilities of the plane but as well with the question — has it really already been 22 years? 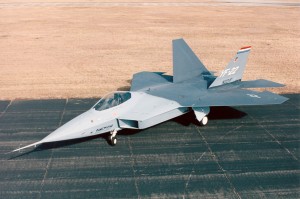 After the flight test program, PAV-1, the first prototype of the Lockheed-Boeing-General Dynamics YF-22 Raptor was granted to the National Museum of the United States Air Force for display. Photo Credit: USAF

It is hard to imagine that the plane that everyone regards as the finest air supremacy in the world is already 22 years old.  Yet on September 29, 1990, the YF-22 team flew its first flight of Prototype 1, known as PAV-1, meeting the requirements of the USAF bid program.  For the ATF bid, two prototypes had been built.  The second, PAV-2, would be flown on October 30, 1990 — each differed in engine selection, giving the USAF and Lockheed two options in the event that one aircraft outperformed the other or if there were supply problems.

For the first flight of PAV-1, Lockheed’s test pilot David L. Ferguson took off from the Lockheed Palmdale factory airstrip and climbed to an altitude of 12,500 feet ASL.  He accelerated to 250 kts airspeed.  All systems performed well (or well enough, as there are always a few issues that crop up) and just 18 minutes later, the aircraft made a textbook perfect landing at Edwards AFB.  Once there, at the USAF’s renowned test facility, the YF-22 would undergo extensive testing in the competition against the YF-23. 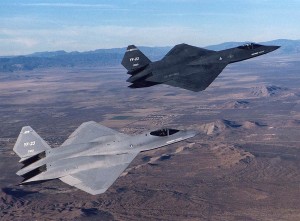 The YF-22 flying alongside its competitor in the ATF bid, the YF-23. Photo Credit: NASA

Like the YF-23 team, the YF-22 team was composed of a slate of top US aircraft firms.  Lockheed’s famed Skunk Works headed up the effort and was in charge of the design for the cockpit and nose of the aircraft as well as its air intakes.  Boeing and General Dynamics provided manufacturing and design for the rest of the aircraft, with Boeing focused on the wings and aft fuselage while GD worked on the central fuselage and weapons bays (for improved stealth, all rockets and weapons were to be carried internally) as well as the landing gear.  It was a complex relationship, but one that worked perfectly.

The original YF-22 was nicknamed the Lightning II by Lockheed in honor of the storied past of Lockheed’s relationship with the USAF, harkening back to the P-38 Lightning fighter plane of World War II.  The Lightning name didn’t stick, however, as the USAF had other ideas.  By 2005, the plane was dubbed the Raptor instead.  The Lightning II moniker would later be successfully applied to the J-35 fighter program, leaving critics with few complaints. 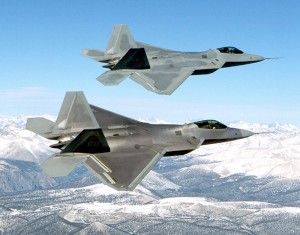 With the selection of the YF-22 on April 15, 1991, Lockheed went into a 14 year long design and testing effort.  Whereas earlier generations of fighter planes had gone from drawing board to flying prototype and into production in a scant few years, everything about the USAF’s ATF program and the YF-22 moved slowly ahead.  Each subsystem was tested, redesigned, tested again and optimized.  The requirements advanced and the USAF incorporated a new concept, “spiral development” where new technologies were added as the aircraft proceeded through the testing phases.  However, while performance and capability spiraled up, so did price.  Everyone involved knew that the plane they were designing wouldn’t have a ten year service life, but rather would likely be flown by six to ten generations of future USAF pilots over the next 60 years — maybe even for as long as the next 100 years.

Ultimately, given the costs and the changing world geopolitical landscape, the F-22 program was trimmed back to just 187 operational aircraft.  Although this may not seem like many, it is important to note that the aircraft has a very narrow mission — at attain and retain air supremacy.  At that, it excels so well that it is quite likely that 187 are more than sufficient to address current threats.  While the aircraft has the ability to perform bombing missions, it is quite clear that the F-22A Raptor is truly the world’s finest fighter plane — bombing and airstrikes with precision missiles are best performed by other aircraft that can enjoy the unchallenged airspace that the F-22 can provide. 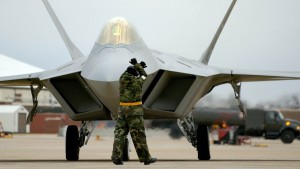 Originally designed to replace the F-15 and F-16, two 1970s era designs that have been continuously upgraded over the years (these two aircraft remain the world’s front line export types), the F-22A cutbacks meant that to a great degree they now supplement the F-15s and F-16s in service.  Together, these fighters give the USAF an unmatched advantage in the air versus any adversary world wide.

Nonetheless, the F-22A Raptor has capabilities that make the F-15 almost look like a Third World competitor.  Able to supercruise (without afterburner fly for several hours at supersonic speeds), the F-22A also has radical control systems and high angle of attack flight capabilities.  It can fly and fight at 60 degrees AoA and perform skidding twisting turns with directional thrust from its engines.  Rather than using the traditional two control surfaces on the tail as most planes do, the F-22A has four control surfaces, plus two rudders.  Dynamically unstable, it requires a computer just to fly straight and level.  It is agile, of course, but the key advantage is that it is invisible to radar.  Though the actual radar reflection values remain closely kept secrets, some have likened the F-22A’s radar cross-section to something of a small bird, perhaps (as one USAF pilot put it) the radar return of a hummingbird. 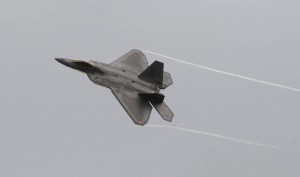 In practice dogfights with F-15s at Langley AFB, the F-15 pilots would fly out and begin searching for the F-22As — they would never find them.  In the first engagements, it was as if the F-22A Raptors were simply not there.  “Fight’s on,” would come over the radio.  The F-15s would scan the skies with their radars, querying orbiting AWACs and ground radars for vectors.  There would be none.  Then the count would begin — “#3 is down, #4 is down.”  A pause.  “#1 and #2 are both down.”  The F-15 drivers would orbit senselessly, having never even seen the attacking planes.  If the fight was flown visually, the F-22A Raptors were like twisting eels, one second they were in front, and the next second they were skidding around with directional thrust in a turn that, to match it, would have required a sustained 15 Gs.  The planes were simply impossible to track and shoot down.

Sneaking up on them proved virtually impossible as well.  While the F-22s had complete reporting from flight controllers of every approaching aircraft, the F-15s and F-16s rarely had anything to go on at all.  The F-22s even shared digital radar information between fighters and with the AWACs in real-time.  This gave the F-22 pilots a full battlefield picture without even having to take a single vector for an intercept, let alone turn on their own radars.  Even if one did get a line on them, painting one with a lock-on for a radar-guided missile shot was impossible — the stealthiness of the F-22 meant that radar-guided missiles were essentially useless since the aircraft didn’t provide sufficient reflections for the missiles to track. 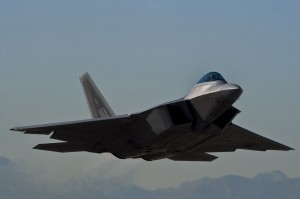 While other countries are trying to perfect their own stealth aircraft, nothing yet matches its capabilities.  Today, the F-22A Raptor reigns as the supreme fighter plane of all time.  Perhaps it will be the greatest fighter plane ever built since it will likely be at least another 20 to 40 years before a replacement design is requested and prepared for testing.  With the usual extension to service life that seem ever more common these days (1950s era B-52 Superfortresses are still flying today and will likely be in the air another two decades), it is quite possible that the F-22A Raptor will potentially enjoy a 100 year lifespan.  By that time, perhaps the requirement for an agile dogfight air supremacy aircraft will be old history.  Who knows? — maybe we’ll all be in flying saucers by then anyway.

One Final Bit of Aviation History

A number of other countries have expressed an interest in the F-22 program.  Among the countries that have asked are Israel — which can certainly demonstrate a level of sophistication in its air defense and offense capabilities to integrate the aircraft into its air force — and Iraq, which made the request.  Both were denied.  For Iraq, the USAF offered that its new air force should upgrade to F-16s, which would bring it into a position of parity with its neighbors and also enable it to join with and work closely with the other Gulf States in providing for a common defense in the region.  Likewise, Japan has stated an interest as has Australia.  These two air forces have the ability to fly the aircraft, though perhaps not the budget to acquire sufficient numbers of F-22s to serve as their primary air defense fighter.  All of these countries are current partners with the United States and would only strengthen their ties if at some point they do have the option of acquiring F-22s.  However, it should be noted that under US law, the export of the F-22 remains strictly forbidden.  Ultimately, the F-22 is a US-only aircraft — after all, it took the USA 22 years to get this far.

If the YF-22 was known as the Lightning II (and later Raptor), what was the proposed nickname of its competitor, the YF-23?