Coming in from due west, the C-130E(I) Combat Talon code-named “Cherry 01” made a pass at 1,500 feet over the target compound, dropping illumination flares.  The pilot keyed the mic — “Alpha, Alpha, Alpha”, he called and then banked hard into a right descending 270 degree turn that curved around the small, walled compound and departed to the northeast at just 500 feet of altitude.  During the turn, the load master dropped a specialized type of ordinance off the back ramp — “Battlefield Simulators” which would land and then light up with flashes, explosions and small arms cartridges to confuse the enemy into thinking the surrounding area was being attacked.  Meanwhile, a second C-130E(I) Combat Talon, “Cherry 02”, dropped more Battle Simulators farther to the west.

Then a Sikorsky HH-53C Super Jolly helicopter raced diagonally over the center of the compound.  In a single pass with its miniguns, all of the guard towers ringing the camps walls were destroyed.  Seconds later, the assault began…. 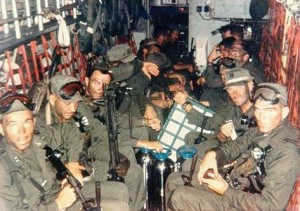 The assault team “Blueboy” on board the HH-3 “Banana” — these are the faces of the Green Berets who took the compound from inside. Photo Credit: US Army

It was the early morning hours of November 20, 1970, and this was the beginning of the final phase of Operation Kingpin, the raid on a POW prison at Son Tay in North Vietnam.  Intelligence revealed conclusive evidence that 61 Americans were held there.  If successful, the raid would free the men — with luck, this would be their last night in captivity.

Operation Kingpin was a complex mission that involved no less than 28 aircraft directly over the compound while dozens of aircraft engaged in diversionary attacks across much of North Vietnam.  Son Tay was close to North Vietnam’s capital of Hanoi and therefore every effort had to be undertaken to distract the enemy defenders.  Large scale strike packages launched from three US aircraft carriers in the Gulf of Tonkin, including the USS Ranger, USS Hancock and the USS Oriskany.  These targeted Hanoi and Haiphong with simulated mining and air operations — over 200 aircraft were involved and reportedly, the enemy air defense commander panicked, keyed his mic, and ordered “Fire at will!” and then shut down and went into hiding.  In the end, the Navy’s planes carried out their mission, dodged 20 SAMs and returned safely to their aircraft carriers for landing without losses. 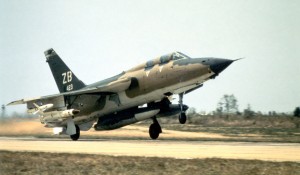 An F-105 Thunderchief SAM suppression aircraft takes off from Korat in 1971 — identical to the ones used in the Son Tay Raid. Photo Credit: USAF Museum

Concurrently, flights of ten USAF F-4 Phantoms and ten F-105 Thunderchiefs orbited at higher altitude, ensuring that any NVAF interceptors would be effectively countered as well as drawing off and suppressing the surface-to-air missiles (SAMs).  Concurrently, at lower altitude, five A-1 Skyraiders swooped in to provide close air support as six helicopters swept in with the assault teams — the loading plan included a total of 59 Green Berets and others in the ground force that had just one goal, to free American prisoners and bring them home.

Six special forces helicopters were involved in the mission — the first and most important was an HH-3E Jolly Green helicopter (s/n 65-12785) which was code-named “Banana”.  On board were 14 special forces Green Berets who had trained extensively for the mission.  “Banana” had a unique mission — it would crash land directly inside the walls of the compound, allowing the rescuers to race directly to the prison cells.  The rest of the assault force consisted of five HH-53C Super Jolly helicopters, “Apple 01” through “Apple 05” and these landed outside and established a security perimeter as well as set up the evacuation points.  At the end of the mission, “Banana” would be left behind, wrecked in the courtyard while the men were lifted off on board the “Apple” flights. 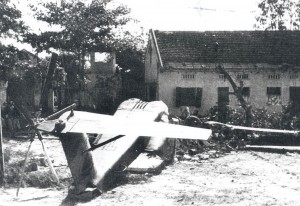 The morning after, with the wreckage of the crash landed “Banana” helicopter that put the assault right inside the compound. Photo Credit: USAF

At the start, a major mistake was made when a nearby school compound that looked almost identical to the target drew the first assault teams.  “Banana” descended into the courtyard, but recognized the mistake and diverted to the actual target nearby.  However, “Apple 01”,  landed outside and discharged its force before quickly lifting back off and disappearing into the night skies.  These men discovered that they were 400 yards from the Son Tay prison camp and, unexpectedly, the schoolyard turned out to be a military barracks.

In fact, they soon found themselves in a firefight against 200 Chinese “advisors” who were sent there by Beijing to train the NVA.  Two squads of Green Berets in an open field were thrust into a full-on firefight against 200 Chinese special forces trainers.  What followed was four minutes of hell before “Apple 01” returned for the pick-up.  Loading under fire required five more minutes and then the helicopter departed and dropped the men back off at the right target.  Later assessments revealed that over 100 of the Chinese were killed in the firefight in exchange for the loss of none of the Americans. 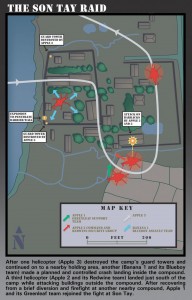 Diagram of the Assault. Illustration from the National Museum of the USAF

Back inside the Son Tay compound, the 14 Green Berets from “Banana” ran toward the five prison cells where the American POWs were supposed to be.  Checking each, they found none.  The Americans had been moved to another camp four months earlier, something the intelligence analysts had failed to realize.  As the assault team radioed “Negative Items” (code words for just that result), the forces began the rapid extraction process.  From the first call of “Alpha, Alpha, Alpha”, the entire operation lasted just 26 minutes.  With the last helicopter departing, the only sounds left were the cacophony of the Battlefield Simulators, coupled with the receding engine noise from the jets overhead.

The entire force withdrew successfully, even if they had exited through a barrage of 36 SAM launches.  Two of the F-105s tasked with SAM suppression were damaged, one severely — it crashed in Laos and the crew was rescued by one of the departing Son Tay assault helicopters, “Apple 03”.  In all, just one injury was suffered by the American forces — the flight engineer on “Banana” fractured his ankle when a fire extinguisher fell on him during the crash landing.  Tactically, the mission was perfectly executed, despite that one helicopter landed at the wrong place and ended up in an intense firefight with a numerically superior force, everything had come together perfectly. 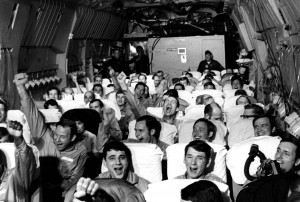 After the end of the Vietnam War, the surviving American POWs were released and airlifted out from Hanoi — here, in the back of a C-141 cargo plane, they celebrate as the plane takes off. Photo Credit: USAF Museum

As for the POWs that remained in North Vietnam, the raid may not have rescued any, but it did result in a major change to their handling by the North Vietnamese.  Many of the small camps that were spread across the countryside were closed down and the POWs were relocated centrally and together to Hanoi.  As a result, their treatment improved, as did access to mail, medical care and food, even if their treatment by the North Vietnamese was still far below the acceptable standards under international law.  For many of the men, their morale improved considerably simply because they were together with other Americans.

As for the intelligence failure that resulted in no POWs being at Son Tay, even that experience proved useful.  Today, the Son Tay Raid is one of the classic studies of special operations raids.  The lessons learned formed the foundations for a complete reorganization of special forces and related intelligence programs.  Even the recent raid on the Osama Bin Laden compound in Pakistan carried the fingerprints of Son Tay, and stands as a stellar example of the supreme expertise of the men and women in the special forces and intelligence agencies that protect Americans around the world.