On this date in aviation history, in 1916, two German men took off in an LVG C.IV (s/n 262/16) and flew to London on a lone bombing mission.  It was the first time a fixed wing aircraft had been used to try and bomb the capital city of England.  The men, pilot Deckoffizier Paul Brandt and Leutnant zur See Walter Ilges, planned to bomb the British Admiralty buildings at Whitehall.  Flying alone, they crossed the English Channel and made their way to the Thames.  Navigating up the river, they spotted Whitehall, easily visible even from their altitude of 13,000 feet.  Deckoffizier Brandt pointed the nose of the plane toward their target and, manually aiming, they pulled the release to salvo six 10 kg bombs toward the target below. 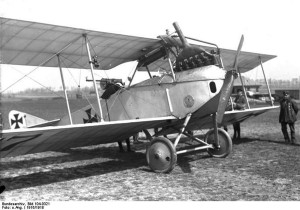 Germany recognized that the first fixed wing plane to bomb London would be a significant event.  With the new aircraft coming into service in 1916, what was before an unlikely flight was now within range.  For over a year, bombing raids with Zeppelins had been ongoing, but losses were mounting as British air defenses improved.  Clearly, the answer was a fixed wing bomber and the LVG C.IV seemed to fit the bill perfectly due to its larger engine, a 220 hp Mercedes D.IV.  Designed for high altitude reconnaissance, it could be mounted with bombs  Modifications were made to add racks for the six bombs.  The course was carefully plotted.  The crew were selected and the mission was assigned to II Marine Feld-Flieger Abteilung flying out of Mariakerke airfield.

The Flight and its Results

As it happened, hitting a target from an altitude of 13,000 feet was no easy matter — particularly without a bomb sight.  Yet coming in at lower altitude would have meant that the plane and its crew would have been at risk to London’s anti-aircraft artillery defenses.  Further, interception would be easier to achieve than at a higher altitude since, by the time an interceptor took off and climbed to 13,000 feet, the plane would have escaped to the English Channel and safety.  Thus, the crew dropped their bombs from high up, estimating the angle of the drop as best they could and hoping for a hit.

Side view of an LVG C.IV, the first fixed wing bomber to attack London.

As it happened, they missed, quite literally by a mile.  In fact, it was more than a mile — the six bombs fell near Victoria Station, part way toward Brompton Road.  The bombs caused little damage.  Once the bombs were dropped, Leutnant zur See Walter Ilges took some photos with his reconnaissance camera to record the success of the mission.  These would be very useful once they returned.  Further, the photos would undoubtedly make headlines across Germany.  The crew turned south toward the Channel.

As the LVG C.IV cruised steadily back across the English Channel, its engine suddenly suffered serious problems.  It became clear that not only could the plane not hold altitude, but it might even have to ditch in the English Channel.  In a bid to lighten the load and hopefully extend its flight, the two men threw what little was left in the cockpit overboard into the water below.  That included the reconnaissance camera, which was rather bulky and heavy.  With the engine sputtering, they extended to make the coast of France.  Without sufficient power to make it to friendly lines, they landed in Boulogne, in French territory.

Quickly, the men burned their airplane to keep it from capture, yet nonetheless, they were themselves taken prisoner by the French military.  With an armed escort, they were taken to a holding camp.  For the next two years until the Armistice, the two men would remain prisoners of war.  Back in Germany, with the news of the capture of the two men, the German high command elected to cancel the planned press announcements.  Without photos, without heroes, without eyewitness accounts of the bombing, and with the news of the capture an embarrassment rather than a triumph, the German leadership simply felt it better to let the matter drop.  They would fly more missions — and drop more bombs — so the news could wait for a while longer.

There is some debate among historians as to the type of bombs used in the attack.  Virtually every contemporary account as well as later books that cover the subject state that the plane dropped six 10 kg bombs.  Based on the bomb types available at that time, the implication would be that the Germans dropped 10 kg Carbonit.  Nobody knows for sure, however.  It is one of many bits of information that is seemingly lost to history.

What was the date of the first Gotha Raid on London during World War I?