“The war-time aviator gets a lot of thrills, risks his neck innumerable times, and — if he comes out of it alive — has a lot of very exciting stories to tell the folks back home.  But if he happens, in addition, to be a soldier of fortune, fighting in a plane instead of on the ground — And if, on top of that, he’s in the service of a Latin-American country where nobody knows much of anything about aviation — And if all the aviators on the ‘enemy’ side are his buddies, boon companions in many a carefree revel….”

So began a news article in the Sunday Morning Star on June 10, 1934, referring to the quandary brought upon Dean Ivan Lamb, an American pilot who found himself in the world’s first aerial combat, which took place during the Mexican Revolution, that pitted him against his good friend, Phil Rader, another American pilot and soldier of fortune who was taking his salary from the other side. 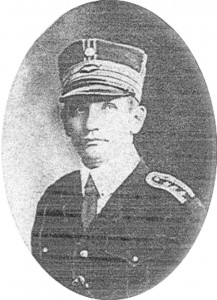 Reputed portrait of Dean Ivan Lamb, while in Peru, having been supposedly accorded the rank of General by the Peruvian Government in 1928. Source: Brooklyn Daily Eagle, New York

Dean Ivan Lamb had sought nothing more than adventure after he learned to fly in May 1912 at the Curtiss Flying School in Hammondsport, New York.  There is no evidence that he ever received his certificate, but nonetheless, he traveled to Naca, Arizona, in the early years of the Mexican Revolution.  Soon he learned that the adjacent Mexican town was held by the Carranzistas (Francisco Madero’s camp) which was besieged by General Victoriano Huerta’s forces.  When the Carranzista’s own commander, General Benjamin G. Hill, learned Lamb could fly, he hired him and purchased a Curtiss D Pusher, which was shipped down from New York State. 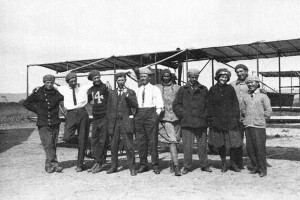 A Curtiss company photo of the students attending the New York flight school in May 1912 — as such, one of those pictured may well be Dean Ivan Lamb.

Once in the employ of Gen. Hill, Lamb learned that his good friend and fellow aviator, Phil Rader, a former San Francisco newspaper writer, had likewise taken a job with Gen. Huerta, in the opposing camp and was flying a Cristofferson Pusher.  In an era where aviators did not attack one another — indeed, aerial combat had yet to be “invented” — this did not seem a problem and both men were happy to accept payment to work with the Mexicans.

However, in late November of 1913, Gen. Huerta ordered Rader to drop bombs on the Carranzistas.  His missions soon became a repeated affair that were flown above the range of his forces’ rifle fire.  Predictably Gen. Hill ordered that Dean Lamb use his pistol to shoot the other man if he encountered him while aloft.  It wasn’t long before Phil Rader’s plane reappeared to drop more bombs. 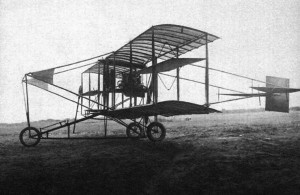 A Curtiss Model D Pusher, of the type that Dean Ivan Lamb supposed flew in Mexico. Notably, Lamb almost undoubtedly did train in this very airplane in New York in 1912. Photo Credit: Curtiss

An Aerial Combat (of Sorts)

On November 30, 1913, the fateful day finally arrived when both men spotted one another aloft.  Years later in his book, “The Incurable Filibuster”, Lamb wrote of the encounter:

“Early one morning, while making a reconnaissance, I saw the enemy plane and edged over in its direction.  As I neared the machine close enough to note details, the pilot pushed up his goggles. Sure enough, it was Phil Rader.  He seemed to recognize me, and while trying to edge a bit closer we nearly locked wings.  He quickly sheered off, shaking his fist at me, and then straightened out, flying parallel.”

Lamb had made history — though he hardly considered it.  It was the first time one airplane had intercepted another during a conflict.  But what to do now that they were close?  They could fly alongside one another, but Lamb could not talk to, let alone convince the other man not to throw his few small hand bombs.  His orders too were to fire on the other man with his pistol.  From such close range, it was not only possible to not only hit the other man’s machine but even shoot to kill him.  Lamb considered this and rejected the idea.  Yet a pistol would be drawn — it just wasn’t Lamb who drew first, as he wrote later:

“[Rader] then drew a pistol and fired downward below my machine.  For a second my heart stopped beating as I drew my own gun, but before starting action it occurred to me that he had not actually aimed at me, but beneath.  Following his example, I fired twice, and as he suddenly tilted his plane my heart jumped into my throat, thinking that by accident he had been hit.  He straightened out again and copied my example by firing two shots.  We then fired spaced shots until our guns were empty at about the same time.”

A Christofferson Pusher, the type that Phil Rader would have flown.

At that, the two men flew apart in a broad circle while they both reloaded.  Their combat would be believable only if they returned without ammunition — and who among the Mexicans could gauge how hard it might be for one pilot to shoot another while in the air?  Somehow, despite the challenges of maintaining control and reloading, they both managed.  Once again, they flew close to one another, aware that on the ground, the two armies were watching their aerial duel high above, where one man would shoot and the other would fly away, only to return to exchange fire from the other side.

Again, they exhausted their ammunition.  Again, they reloaded.  This “fight” continued until finally both men were completely out of ammunition.  With that, they waved at one another and flew their separate ways.  Back on the ground, both pilots were celebrated as aerial heroes, having faced death in a drawn out duel with another man in the skies.

Over the following weeks, even if the two men could have encountered each other again, Lamb’s plane — purchased cheaply — was not in good enough condition to continue its reconnaissance flights.  When Gen. Hill’s payments subsequently were inexplicably “delayed”, Lamb suspected that he wouldn’t be paid after all.  Thus, he quietly slipped away and left the services of the Carranzistas to head back north to the United States.  As for Phil Rader, he stayed for a while longer before also departing. 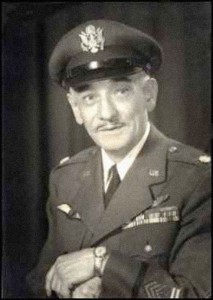 The story seems perfectly in line with the affairs of those times and makes for a wonderful tale.  There is, however, just one problem — the “First Dogfight” may well have been a complete fabrication on the part of Lamb, since no other records seem to support the story one way or another.  Further, Mexican records do show the acquisition of both planes on each of the sides until 1914.  Yet before one dismisses Lamb as just another spinner of tall tales who wrote his tales in the 1930s to a willing audience, it is worth considering that two years later he joined the Royal Flying Corps.  Some say he shot down at least five and perhaps even eight German aircraft during World War I.  Later, he joined the USAAF and participated in World War II.  He retired from the USAF in the 1950s as a Lieutenant Colonel — and thus, with more than enough real stories to have told along the way.  Or did he?

In a weird repeat of this farce, after World War I, Lamb wrote that he again offered his mercenary services as a pilot and commander, this time in Paraguay.  He commanded the Federales squadron with 11 airplanes and soon found his friend, an Italian pilot named Mazzolini, had signed on to command the revolutionaries.  The two got together in Argentina and together interviewed pilots in Buenas Aires.  Lamb hired more as the revolutionaries only had six planes.  Together, both squadrons took a train to Paraguay, drinking champagne and laughing about their upcoming “war”.

As had happened in Mexico, the Paraguayans knew nothing of aviation and aerial combat — yet they demanded to see results, having read about aerial combat over the Western Front.  Lamb and Mazzoli soon put on the show demanded, with one Federales pilot chasing a Revolutionary over the aerodrome, shooting his machine guns.  Soon, the Revolutionary plane fell in a spin and disappeared into the distance behind a hill.  When the Federales pilot landed, he was greeted with a case of champagne, which the squadron consumed willingly.

“From that day,” Lamb later wrote, “it was tacitly understood that when flying over enemy territory we, likewise, were to be always defeated….  Each time a machine fell the old colonel opened a case of champagne in honor of the occasion and made a long official report.  I was shot down five times in the same manner when well away from the aerodrome, and in turn shot down seven of my friends.  The colonel never seemed to grow suspicious of the numerous victories we piled up, and a case of champagne was always forthcoming.”  He added,  “Some real ground strafing, bombing and reconnaissance was done, incidentally.”

Of course, this too could be just another fabrication of Dean Ivan Lamb, all the more so in that the (rather spotty) records of that war include no record of him in Paraguay either.

And then there is this — from 1919, a write-up by Dean Ivan Lamb himself of one of his supposed wartime exploits from the Great War along the Western Front:

Whatever happened to Phil Rader after his war in Mexico?  (Or was there even a Phil Rader?)


Yes, there was a Phil Rader. After serving with the British Flying Corp in 1914 and 1915 he returned to the U.S. to become an instructor. He was killed on June 10, 1918, in a plane crash at Curtiss Aviation Field in Buffalo, New York. Also killed in the crash was an aviator named Robert Connor.


Thank you for this. Learning a lot about my great grandfather. I really didn’t know any of this, but heard rumors from my grandmother. Coincidently writing this from Lackland Airforce Base. A1C Phillip Rader IV.