The Baroness of Flight

It seems fitting that today, on International Women’s Day, we should salute the first woman in history to earn a pilot’s certificate.  Raymonde de Laroche was an unlikely aviator.  Born Elise Raymonde Deroche, she was the daughter of a plumber who, according to some reports specialized in unclogging stopped up toilets.  Predictably, her parents were somewhat upset that she chose a different career than the family business, yet early on the signs were there.  By the time she came of age, she had developed interests in automobiles and motorcycles.  Then, she started a career as an actress, using the stage name Raymonde de Laroche, which she then carried through the rest of her life. 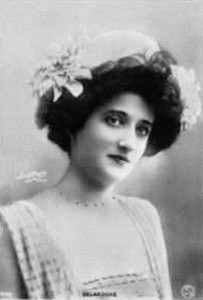 Raymonde de Laroche when working as an actress.

How did this actress become interested in aviation?  It all began with an affair taken up with an artist-turned-aviator named Léon Delagrange, who (though history is a bit murky on the issue) had fathered a child with her.  Attending the 1908 exposition in Paris, at which she saw the Wrights pilot their plane around the field, she saw her future in the skies.  Delagrange introduced her to Charles Voisin, who had manufactured a first airplane for him in 1907, and it was there at his school that she began to learn the art and science of flight.  Finally, today in aviation history, on March 8, 1909, Raymonde de Laroche was awarded her pilot’s certificate.  In doing so, she became the world’s first licensed woman pilot. 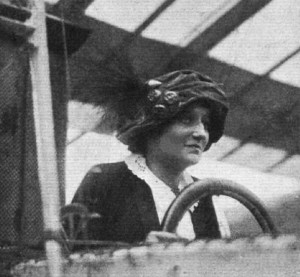 Raymonde de Laroche at the controls of her Voisin at the time of her first solo flight; this photo was presented in the very same news report that introduced her as a “Baroness”. Source: Flight, October 30, 1909

Raymonde de Laroche’s first solo flight was written up in Flight, the newsletter of the Royal Aero Club, and printed in its October 30, 1909 issue.  Fittingly, it made note of the barriers facing women that even in those days stood against those entering into a field previously dominated by men:

Yet another sphere which some had thought man would, for some time, at any rate, retain for his own been invaded by the gentler sex.  Baroness La Roche has been successfully piloting a Voisin biplane, and has thereby earned the right to be known as the first lady flyer or “aviatress.”  For some time the Baroness has been taking lessons from M. Chateau, the Voisin instructor, at Chalons, and on Friday of last week she was able to take the wheel for the first time.  This initial voyage into the air was only a very short one, and terra firma was regained after 300 yards; but on the following day the parade ground at Chalons was encircled twice, the turnings being made with consummate ease.  During this flight of about four miles there was a strong gusty wind blowing, but after the first two turnings the Baroness said that it did not bother her, as she had the machine completely under control. 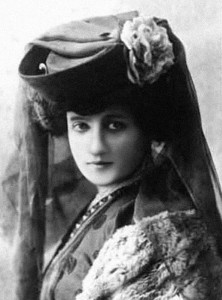 Newly reported to be a “Baroness”, Raymonde de Laroche could certainly dress the part, as this portrait of her in 1909 shows clearly.

Despite the report above, Raymonde de Laroche was anything but a baroness, of course.  Somehow, Flight’s writers had labeled her with the title of nobility and, so honored in the rarefied field of aviation, she was wont to correct their error.  In fact, she rather enjoyed it.  Soon after earning her flying certificate — License #36 from the Fédération Aéronautique Internationale, as awarded through the Aero-Club of France — she embarked on a tour to demonstrate her skills at exhibitions around Europe and North Africa.  She flew in Heliopolis, Egypt, and at Budaspest in the Austro-Hungarian Empire, as well as at various airfields around France, including at Rouen.  She was welcomed into the small, elite club of early aviators, befriending many of the most famous names of the day. 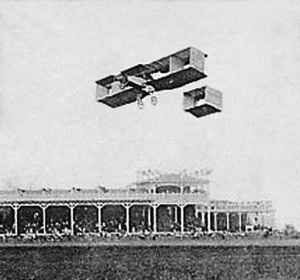 In a rare photograph shortly before her near fatal crash, French aviatrix Raymonde de Laroche flies her Voisin biplane at the Grande Semaine d’Aviation de la Champagne, in Reims, France, during July 1910.

Travels and Earning Her Title

Wherever she went, she was introduced as the Baroness de Laroche.  Coupled with her position as the world’s first licensed woman pilot, she was accepted quickly into the lofty circles of elite society.  The high point of her new life as a “baroness” took place in St. Petersburg, Russia, when she was personally greeted and enjoyed an audience with the Tsar himself, Nicholas II.  When the Tsar addressed her as “baroness”, it was as if she had been formally anointed with the honor.   Forever after, she never again disagreed with the nobility that had been assigned to her name, even if it had been a mistake at the start — after all, her title had been recognized and endorsed by a monarch!  Who was she to disagree? 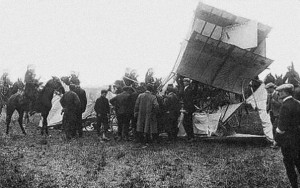 Aftermath of the Baroness’ deadly crash at Reims, in which she was almost killed; the tail of the crumpled Voisin biplane towers above the twisted wreckage.

The Terrible Crash at Reims

Headstrong and independent, befitting of her plumbing family roots, Baroness Raymonde de Laroche pushed the limits of her piloting skill in challenges and exhibitions.  She competed with others in those early, dangerous and heady days of aviation’s development across Europe.  Yet flying in 1910 was far from a safe sport.  Many of the early aviators perished in crashes, usually due to inexperience at the controls, from some failure of their lightly built, unstable aircraft or engines, and from weather or other difficulties.  Most of the aircraft of that time were prone to violent pitch ups when encountering updrafts, were vastly under powered and stalled easily.  Baroness de Laroche was not immune to such terrible events and finally had her first great crash during an exhibition at Reims, when the plane fell from an altitude of 50 meters after stalling.  It nearly killed her. 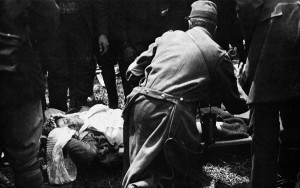 An unconscious Baroness Raymonde de Laroche is removed from the wreck of her Voisin at Reims, July 1910.

At the time, she was flying at the Grande Semaine d’Aviation de la Champagne.  Her crash happened on July 8, 1910, and left her seriously injured.  Her recovery was very much in doubt — in fact, few thought she would survive.  She was dragged from the wreckage unconscious.  Taken to the hospital, within days the doctors declared that she would survive, even if the injuries were severe.  It would be almost two years before she would again be healthy enough to take to the skies. 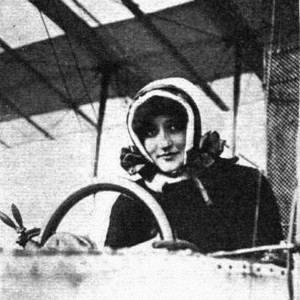 Baroness Raymonde de Laroche at the wheel of her Voisin biplane shortly before the accident in 1910. Source: Flight

With her health regained, her preference remained strong for Voisin aeroplanes.  Thus, in the autumn of 1912, she went to visit with her old friend, the aircraft manufacturer and flight school owner, Charles Voisin.  During the evening of September 26, 1912, the two were out driving and were returning from St. Etienne in Voisin’s motorcar when they suffered a terrible accident, colliding with another car near Bellville-Sur-Saone, France.  Charles Voisin was killed instantly, the car having rolled atop him in the event.  As for the Baroness, after two years of recovery from her earlier aviation accident, she was once again gravely injured.  It would take months to recover, but she was determined to once again return to the air — and she would.  A year later, she competed in the Coup Femina and won with a flight of four non-stop hours in the air on November 25, 1913. 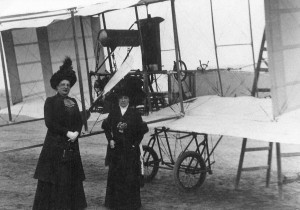 Baroness de Laroche, at left, with a friend (at right, unidentified), standing before her Voisin aeroplane while in Egypt in 1910.

With the outbreak of the Great War in 1914, Baroness de Laroche was denied the right to fly airplanes in battle for France.  The French military made it clear that such activities by a woman were simply too dangerous to consider.  Ironically, she volunteered as a chauffeur and drove senior French military officers to and from the front lines, often under fire.  Despite that her wartime duties were probably at least as dangerous as flying, she somehow survived the war. 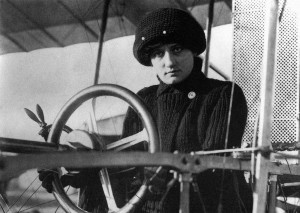 The Baroness, always comfortable behind the wheel of her Voisin, c1909.

Afterward, in 1919, the Baroness made up her mind that she would once again do what no woman had ever done before — this time, she set her mind to becoming the first woman test pilot, a field then reserved exclusively for men.  With the depth of her knowledge of aviation, engines and engineering, it was likely she would have achieved her goal too.  Sadly, it was not to be.  On July 18, 1919, she was invited to commence tests at Le Crotoy Airfield, but as a copilot.  This way, she would learn the trade under the tutelage of a professional male test pilot.  On landing approach in a new aircraft type, the plane suddenly and inexplicably nose-dived vertically into the ground.  She and the pilot were killed instantly.

In the end, the story of the Baroness Raymonde de Laroche, born the daughter of a plumber, remains one of the most inspiring and unlikely tales of aviation’s early days.  Throughout her life, the Baroness had overcome extraordinary obstacles, injuries and ill luck.  That she flew, higher and faster, longer and farther, time and time again is testimony to her courage, iron will and dedication.  After her untimely death, the memory of the Baroness was preserved in a statue erected in her honor.  Today, it still stands on the grounds of the famous Le Bourget Airport in Paris.

What type of airplane was Baroness Raymonde de Laroche testing when she died?


The photo of the very tall woman and the shorter woman is confusing, as neiither one of these women look anything like Laroche. You can tell just by looking at all the other photos of her on the same page!


Actually, the Baroness is at left in the photo; the shorter women (unidentified) stands beside her on the right. They stand in front of her Voisin aeroplane while she was in Egypt in 1910.


I believe that the shorter woman on the right is Theodora Marcone. She claimed that she was the first woman to fly in Italy and that she was friends with the Baroness La Roche and Mlle Dutrieu. She trained in Turin and her instructor was a German named Fischer. If she did fly in 1910, it was as a passenger since she later claimed that she did not solo until 1912. I’m currently researching her life and it’s been a challenge finding info about her life.