“Upside Down in Mid Air!”

IIt was 100 years ago this week that a detailed report was published regarding two episodes where hapless aviators had found themselves, by trick of ill-winds, suddenly upside down in midair.  In both cases, somehow, against all odds, despite in one of the cases having not even been belted in, they survived.  Of the two stories — one concerning the French military pilot, Capt. Aubry, and the other concerned Capt. H. R. P. Reynolds of the Royal Flying Corps — it is the latter that truly deserves to be preserved and published again today.  The story relates a hair-raising experience that Capt. Reynolds hoped he would never again have to experience.

In all likelihood, he was the first aviator to survive upside down flight.  Sadly, it did not end well. 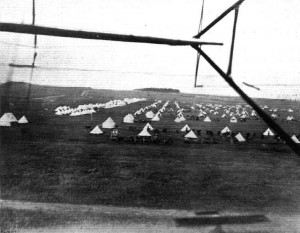 View from the cockpit of a Bristol Biplane, perhaps the same one that was flown by Capt. Reynolds, as it flies low over the rows of tents at an altitude of perhaps 200 feet at Hamilton Camp on Salisbury Plain — note the plane’s shadow at bottom right. The tents belong to the 4th Cavalry Brigade. Source: Flight

The report appeared in the April 12, 1913 issue of Flight, the newsletter of the Royal Aero Club and is quoted here at length — beginning with the words, “Capt. Reynolds, who, so far as we know, was the first to experience this sort of accident and to live to tell the tale, very kindly gave us his own description of what exactly took place….”

A Howard Wright Biplane, this one flown by then Lt. H.R.P. Reynolds during the Daily Mail Circuit of Britain Race in 1911. Source: Flight

For the record, Captain Herbert Ramsay Playford Reynolds, originally of the Royal Engineers, was certified as a pilot on June 6, 1911 — he held certificate #92.  His firsthand account of his terrifying flight follows:

“I started from Oxford on the morning of August 19th, 1911, and flew along the line towards Cambridge, where I encountered a misty atmosphere and thought it well to descend.  I came down close to Launton station.  That evening, soon after 7 o’clock, I started again.  It was warm and fine, but rather suggestive of thunder; the air was perfectly still.  I scarcely had occasion to move the control lever at all until I got to Bletchley, where it began to get rather bumpy.  At first, I thought nothing of this; but suddenly it got much worse, and I came to the conclusion it was time to descend.  A big black thundercloud was coming up on my right front; it did not look reassuring, and there was good landing ground below.

“At this time I was flying about 1,700 feet altitude by my aneroid, which had been set at Oxford in the morning.  I began a glide, but, almost directly I had switched off, the tail of the machine was suddenly wrenched upwards as if it had been hit from below, and I saw the elevator go down perpendicularly below me.  I was not strapped in, and I suppose I caught hold of the uprights at my side, for the next thing I realised was that I was lying in a heap on what ordinarily is the under surface of the top plane.  The machine in fact was upside down.  I stood up, held on and waited.  The machine just floated about, gliding from side to side like a piece of paper falling.  Then it over-swung itself, so to speak, and went down more or less vertically sideways until it righted itself momentarily the right way up. 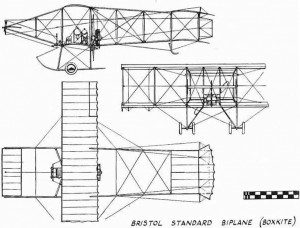 Diagram and plan for the Bristol Biplane, aka Boxkite. Source: Flight

“Then it went down tail first, turned over upside down again, and restarted the old floating motion.  We were still some way from the ground, and look what seemed like a longtime in reaching it.  I looked round somewhat hurriedly, the tail was still there, and I could see nothing wrong.  As we got close to the ground the machine was doing long swings from side to side, and I made up my mind that the only thing to do was to try and jump clear of the wreckage before the crash.  In the last swing we slid down, I think, about thirty feet, and hit the ground pretty hard.  Fortunately I hung on practically to the end, and, according to those who were looking on, I did not jump till about ten feet from the ground.  Something hit me on the head and scratched it very slightly, but what it was I did not know, for I was in too much of a hurry to get away from the machine to enquire at that time.

“The next morning I went out to it, and found one of the rods which held up the left extension lying by the engine and the right wing tip.  The propeller was undamaged, the elevator and the tail were practically unhurt, while the undercarriage, being uppermost, was untouched.  The machine on which this happened was an ordinary Bristol biplane with a 50-h.p. Gnome.

“I was told that just before I smashed there had been two or three ‘whirlwinds,’ as the people called them, in Bletchley, and that one of these had stripped the leaves off a tree. Very possibly this was my friend.” 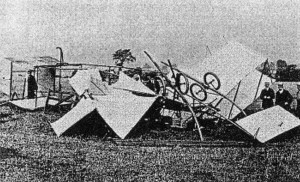 The aftermath of the Capt. Reynolds’ crash in his Bristol biplane — it was this very plane in which he became the first aviator to fly upside down, albeit not in control.

Evaluating the story, it seems that Capt. Reynolds experienced a violent vertical sheer from the nearby thunderhead which tossed the plane into a stall.  With him out of the cockpit and the plane out of control, he clung to it while it went through various inverted and upright falling leaf maneuvers on its own.  It appears that it never exited a fully developed stall but yet did not spin either, perhaps due to his own weight offsetting the center of balance — one can never know.

Perhaps the craziest part of the story is his decision to leap from the plane when it was low to the ground.  It seems incredible that he survived that jump without a broken leg or hip, but he did.  No doubt the lightweight airframe of his Bristol biplane contributed to the slow rate of descent, certainly slow enough that he survived.

Bentfield Hucks and his Blériot XI, “The Tornado”, in which he first performed a loop and inverted flight, seen here c. 1914.

Interestingly enough, in a much later newspaper article (London Times, November 6, 1918), it was claimed that the first Englishman to fly upside down was Bentfield Charles Hucks, who was certified to fly just a week before Capt. Reynolds.  He was also reported to have been the first to perform a loop (so perhaps the upside down flight was at the top of the loop?).  On careful consideration, it seems that both men may hold the honor of being the first to fly upside down — in the case of Capt. Reynolds, it was unintended; while in the case of Bentfield Hucks, it was by plan.


I have glass photographic plates of the crash and possibly Reynolds in the pilot seat prior to taking off.