On this Memorial Day, we salute all veterans who have made sacrifices in the causes of freedom and liberty and also thank those who have served.  Our deepest appreciation goes out to all of you, from the cook assistant and young airman to the senior officers and pilots in the Air Force, Army, Navy and Marines, as well as to those serving in the US Coast Guard.  There can be no more fitting way to express our gratitude than to tell a story today that dates from 1942, when American servicemen and women and civilian contractors came together in a time of war and achieved the impossible — it all happened starting today in aviation history, on May 27, 1942.

This is the story of the aircraft carrier, USS Yorktown (CV-5), a ship thought sunk by the Japanese at the Battle of Coral Sea, which arrived at Pearl Harbor for extensive repairs on May 27.  With cryptographic units reporting on the looming battle to come over Midway Island, Admiral Nimitz needed USS Yorktown badly, yet the Task Force commander from the Coral Sea engagement had estimated that the ship would be laid up for approximately three months undergoing repairs from the bomb damage she had suffered.  Nimitz ordered the schedule accelerated by all means possible.  He could only hope and pray that something could be done in time.  What followed is nothing short of a miracle. 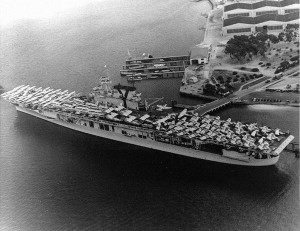 Her deck covered in aircraft, USS Yorktown prepares to depart NAS North Island, San Diego, California in June 1940. Less than a year later, she would be no more. Photo Credit: US Navy

The Battle of the Coral Sea

Earlier in early May 1942, USS Yorktown was serving in the South Pacific in the defense of Port Moresby.  Concurrently, the Japanese were on the move, preparing an invasion there with the support of a range of aircraft carriers of their own, including Shokaku and Zuikaku, both of which had taken part in the attack on Pearl Harbor.  As well, the Japanese had deployed the light carrier Shoho.  These, along with a strong force of cruisers and destroyers, escorted eleven troop transport ships southward into the Coral Sea.  The invasion force was en route. 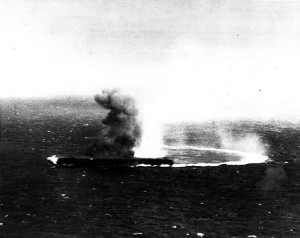 The Japanese aircraft carrier Shokaku under attack by aircraft from USS Yorktown during the Battle of the Coral Sea on the morning of May 8, 1942. Flames are visible from a bomb hit on her forecastle. Photo Credit: US Navy

To counter the Japanese, Admiral Fletcher formed Task Force 17, combining the independent task forces operating in the area under his command in preparation for the battle.  By May 7, the forces were engaged, though the Japanese had failed to detect the American forces first.  Aircraft from USS Lexington and USS Yorktown would engage and sink Shoho.  The following day, on May 8, aircraft from USS Yorktown again struck the Japanese task force, scoring multiple hits on the Shokaku, causing extensive damage.  In return, the Japanese hit both USS Lexington and USS Yorktown.  For USS Lexington, the damage was horrific — Japanese Val dive bombers had hit her with their bombs three times, while two torpedoes from a squadron of Kates tore into her hull.  Later that night, after further explosions from the damage sustained, USS Lexington was finally sunk.

For USS Yorktown, evasive maneuvering managed to avoid all of the enemy torpedoes and all but one of the bombs from the attacking Vals.  That last bomb, however struck the deck and drove deep into the ship’s heart before exploding with extensive loss of life and damage.  Deeply crippled, but still underway and capable of making good speed, USS Yorktown limped from the battle and returned to Pearl Harbor. 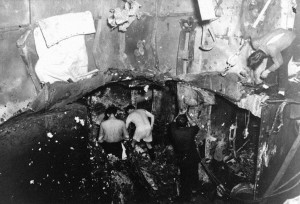 View of damage on the third and fourth decks, amidships, caused by a 250 kilogram bomb hit received during the Battle of Coral Sea, May 8, 1942. This view looks forward and to starboard into compartment C-402-A. Many men were killed or badly injured from the bomb damage. Photo Credit: USS Yorktown war damage report of May 20, 1942.

When the ship arrived to Pearl Harbor on May 27, 1942, she was in terrible shape.  The damage was repairable, but estimates ranged as high as three months in dry dock.  When pressed, the Navy Yard inspection crews quoted that the job might be able to be achieved in two weeks.  For Admiral Nimitz, with the tide of the war hanging in the balance, the coming battle near Midway Island was critical.  Without USS Yorktown, he did not expect to have enough air power to achieve victory.  The dry dock was cleared and USS Yorktown entered on May 28. 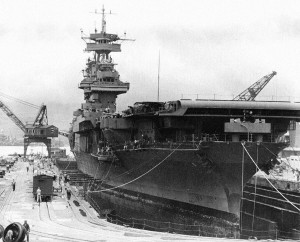 USS Yorktown in Dry Dock No.1 at the Pearl Harbor Navy Yard on May 29, 1942, while receiving urgent repairs for damage received in the Battle of Coral Sea. Photo Credit: US Navy

Even as repairs were started, the Japanese fleet sailed for Midway with four heavy aircraft carriers, Akagi, Hiryu, Kaga and Soryu, as well as one light carrier, Zuiho.  Against that force, the Americans could field USS Enterprise and USS Hornet — if USS Yorktown could somehow be repaired, that would add a third heavy carrier to the American task force.  The odds would still be steep, but victory would be possible.  Once at dry dock in Pearl Harbor, the repair crews went to work.  Everything was done to speed up the repairs and every man possible was drafted to support the effort.  There would be no break as crews worked 24 hours a day.

Against all odds, the repairs were completed in just two days — it was the miracle needed, just in time for the upcoming Battle of Midway. 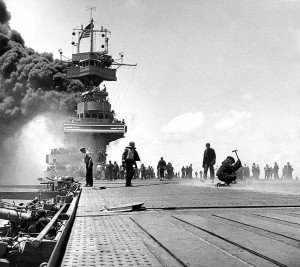 USS Yorktown (CV-5), during the Battle of Midway, June 1942, shortly after she was hit by three Japanese bombs on 4 June 1942. Dense smoke is from fires in her uptakes, caused by a bomb that punctured them and knocked out her boilers.
Photo Credit: Photographer 2nd Class William G. Roy, USN; via NARA

The Battle of Midway

On May 30, the newly repaired USS Yorktown sailed with the Task Force into the waters north of Midway and started flying search patrols in hopes of locating the Japanese forces.  As the battle unfolded, starting on June 4, the Japanese were shocked to find USS Yorktown back in action.  For them, she was like a phoenix that had risen from the dead. 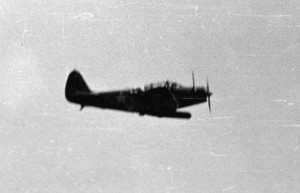 A Douglas TBD-1 “Devastator” torpedo plane, carrying a Mk. XIII torpedo, en route to attack the Japanese carrier force during the morning of June 4, 1942. This plane is probably from Torpedo Squadron Three (VT-3), launched from USS Yorktown at about 0840 hrs. Photo Credit: US Navy

USS Yorktown’s planes (augmented from USS Saratoga, which was too distant to participate) struck and sank the Japanese carrier Soryu.  Meanwhile planes from USS Enterprise sank the Akagi and Kaga,  A counterstrike from Hiryu, however, caught USS Yorktown by surprise and hit her badly. 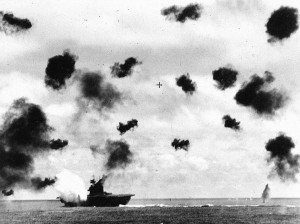 USS Yorktown (CV-5) is hit on the port side, amidships, by a Japanese Type 91 aerial torpedo during the mid-afternoon attack by planes from the carrier Hiryu, in the Battle of Midway, on 4 June, 1942. Photo Credit: US Navy

In the days following the Battle of Midway, USS Yorktown was stabilized despite the extensive damage she had received.  Three bombs and two torpedoes had done extensive damage.  Yet if she could make Pearl Harbor, another dry dock would await — there would be no rapid turnaround on the repairs needed this time, as extensive as they were.  Yet it was not to be. 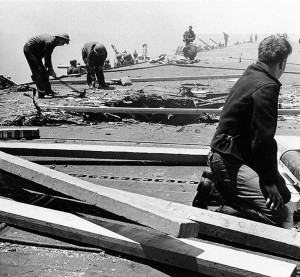 US Navy sailors working on deck during the Battle of Midway amidst bomb holes and fragments in the wake of the successful attack on USS Yorktown. Photo Credit: US Navy

At 15:36 on June 6, the  Japanese fleet submarine I-168 crept in on the stationary ship, even as repair crews were working to get the ship back underway.  The I-168 fired four torpedoes — one hit and instantly sank USS Hammann (DD-412), while another missed, passing to the stern of USS Yorktown harmlessly.  The other two torpedoes, however, hit squarely and caused catastrophic damage.  The ship was fatally damaged, though it took until the morning of June 7, for her to sink.  At 7:01 am, the ship capsized and sank into 3,000 feet of water. 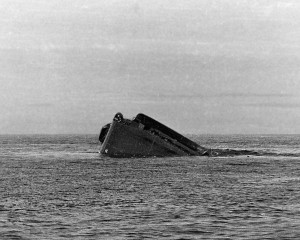 After capsizing from the final damage done by the torpedoes from the I-168, USS Yorktown sinks beneath the waves. Photo Credit: US Navy

USS Yorktown was one of the US Navy’s most storied aircraft carriers of the Pacific War, despite her short life in service.  During that time, she participated in two major naval engagements, sinking a heavy carrier and heavily damaging another.  That she was lost was a terrible blow to the US Navy, but her participation at Midway had turned the tide of the war.  After Midway, the Japanese never again regained the initiative.  What followed was three years of retreat as the US Navy, US Marines, US Army and USAF leapfrogged from island to island slowly closing the noose on the Imperial Japanese Government. 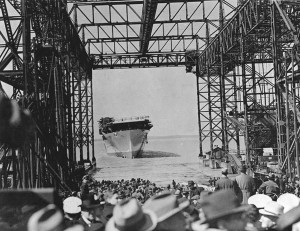 For USS Yorktown, it was a sad, but somehow fitting end.  Named after the American Revolutionary War Siege of Yorktown, a battle that resulted in the surrender of the major British force and forced the end of Britain’s colonial rule over the American colonies, USS Yorktown played a key role too in bringing about the wider victory in the Pacific War against Japan.  Her sailors and airman represented the best of America — and they stand as historic reminders of the sacrifices and extraordinary deeds done by soldiers in uniform on this Memorial Day.

Our thanks go out to America’s veterans — without your sacrifices and hard work, the world would be a vastly different place.  In fact, this article might well have been written in German or Japanese, if at all….  Or maybe in Russian.