The 1935 Plan to Use Rocket Airplanes to Deliver US Mail

In 1935, a wealthy, enterprising stamp dealer, 32-year-old Frido W. Kessler, came up with what seemed like a brilliant idea. He would commission a mail-carrying rocket plane and fill it with a bag of mail bearing special stamps of his own design and creation. He could then sell these unique collectibles for a premium. The scheme had already worked in Europe and he saw no reason it couldn’t work in America.  However, things did not go quite as planned. 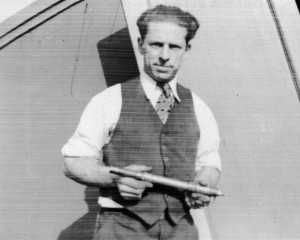 A story about one man and his dream of rocket-delivered mail. It didn’t quite go as he had hoped.

In pursuit of his dream, Frido Kessler formed the Rocket Airplane Corp., made himself president, and commissioned the German rocket expert Willy Ley — newly arrived in the US after fleeing Nazi Germany — to design the rocket engine. The plane itself was to be designed by Dr. Alexander Klemin of the Guggenheim Institute of Aeronautics. Nathan Carver of Reaction Research Laboratories in New York City was signed on to construct the rocket and its motor. In fact, Carver signed a contract with Kessler on December 21, 1935, stipulating that he was to “finish the rocket proving stand, and build a rocket motor capable of delivering at least 35 pounds pressure during the burning time of at least 30 seconds.” This was to be done by December 25!

Kessler was also to construct the rocket plane itself according to the blueprints supplied by Ley, including the motor and fuel tanks. The finished rocket was to be delivered, ready for flight, by January 15, 1935. At the same time, Kessler commissioned Carver to provide a second complete rocket plane by January 22. Each duralumin rocket plane would be 14 feet long with a wing span of 16 feet and weigh about 60 pounds when unfueled. A gas-powered catapult was also to be provided to give the rockets their initial boost. The total cost for the two rockets was to be $700. The cost for launching each one was expected to not exceed $10. 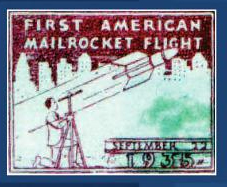 Meanwhile, Kessler took out full-page ads in stamp-collecting magazines. Proclaiming the “First American Rocket Plane Flight” (which was not true), he offered, among other items, individual stamps for $.50 and flown covers for $.75. Kessler had gone to considerable expense in having multi-color stamps engraved and printed by Langdon Engraving Co. The plates were then destroyed after printing a limited number.

John G. Schliech of Greenwood Lake, New York, an ardent stamp collector and “hometown booster”, campaigned to have the launch take place there. There was a large lake at the country club. Frozen solid in the winter, it was thought it would make an ideal location for the launch. The plan was to collect all the purchased stamps, letters and cards, 2,500 pieces in all (some reports say 6,000), place them in a bag and rocket them to the town of Hewitt, New Jersey, 2.5 miles away at the southern end of the lake, where they would all be canceled.

Kessler said that he expected his rocket to achieve a speed of 500 mph. 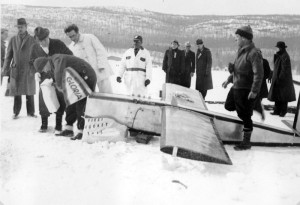 A packet of mail is inserted into the nose cone of the rocket.

The first attempts at rocket-delivered mail were made on February 9 to an eager audience of 500 spectators who had “slogged through heavy snow” to witness the historic event. Also present was Charles Graddick, superintendent of the Air Mail Service, and G. Edward Pendray of the American Rocket Society.

Graddick declared that he expected to witness “an epoch-making flight”. Pendray promised twenty-minute passenger rocket flights to Chicago and two-hour hops across the Atlantic. In Hewitt, the fire department had been ready all afternoon, anticipating fiery missiles descending on the town. 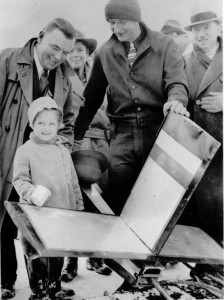 The stamp collector and supporter John Schliech asked his five-year-old daughter, Gloria, christen the rocket with a cup of snow prior to launch.

The rocket was brought into position.  The 45-foot, wood and aluminum gas-powered catapult was set to a 35-degree angle. The rocket, named “Gloria” after Schliech’s five-year-old daughter, was put into place and the young girl tried to christen it with a cup of snow.  The snow had frozen in the cup, however, and a 12-year-old Boy Scout friend had to come to the rescue. 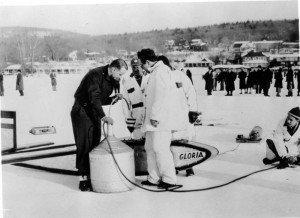 “Gloria” being loaded with a mixture of gasoline, methane, and alcohol as fuel for the flight.

The first try was scheduled for 2:30, but was delayed because of the extreme cold. “The crowd plodded patiently around on the snow and watched the sun above the Ramapos”. At 3:30, the second glider was loaded onto the ramp. Finally, at 4:45, everything was ready. Crying “Everybody back!”, Ley applied a torch to the motor, the engine ignited — but the rocket didn’t leave the ramp. The cable release on the catapult had frozen.

Once the cable release was fixed, a final attempt was made. Rather than soaring across the lake, the rocket dropped to the ice only about 6 feet from the catapult. It was getting dark, so it was decided to postpone the next trial until the following weekend. Kessler blamed the cold, saying that it had caused the liquid oxygen to freeze in the feed line. This resulted in a decision to launch the rocket with its tanks only 1/3 full.

Some of the more cynical members of the audience pointed out that the rocket was sitting only 400 yards from the Greenwood-Hewitt border. Even without a rocket, they said, mail could be hurled over the state line. 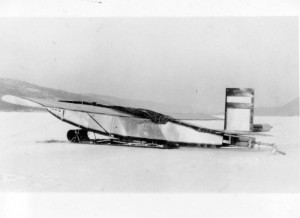 The rocket plane resting atop the ice-covered lake.

Kessler’s enthusiasm was undampened. “I’m really dead serious about this, you know.” He admitted to the failure, but blamed it on the pressure of not disappointing the newsreel companies, his invited guests and the crowd of spectators. “Now you see, what happened was this. The motor had been ignited and the mechanic was stationed to release the catapult. But he failed to do so… Now the motor runs for only three minutes and it had already been going for three-quarters of a minute before the mechanic released the cable. Practically all the power had been used up and instead of rising it went slowly to the top of the catapult and glided down.” 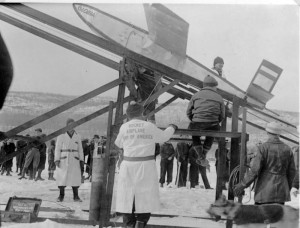 The rocket is positioned on the launch ramp and being readied for flight.

A Second Attempt at Flight

More than 500 people showed again up at Morningside Country Club for a second attempt to launch the Gloria on February 23. CBS news had also sent a radio commentator and the news reel cameramen were all ready. Ley and his fellow engineers from the Reaction Research Laboratory advised against the attempt, saying it was still too cold. However, Kessler, fearing that the crowds wouldn’t return after another disappointment, ordered the launch to take place. 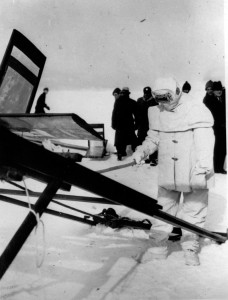 An asbestos-suited Willy Ley lights the rocket motor with a torch.

The rocket “Gloria” was loaded with liquid oxygen and its gasoline/methane/alcohol fuel by an asbestos-suited Willy Ley.  Meanwhile, Carver lay sprawled on the snowy ice, ready to release the catapult. Ley cautiously applied a torch to the business end of the rocket and a shrieking jet of flame shot from the motor. The rocket plane “climbed swiftly in the air, veered to the left, frightened the watching crowd by circling close to it, then straightened out and crashed to the ice after having traveled a distance of approximately 150 yards.” The rocket was badly damaged in landing. It had, however, managed to cross the line into New Jersey. 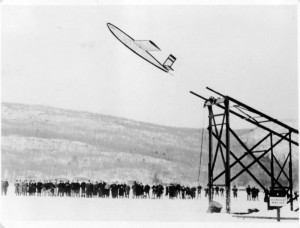 Launch of the “Gloria” on its ill-fated flight — The rocket plane “climbed swiftly in the air, veered to the left, frightened the watching crowd by circling close to it, then straightened out and crashed to the ice after having traveled a distance of approximately 150 yards.”

It was decided to dispense with the troublesome catapult for the second rocket.

The second launch, however, went little better than the first.  “It rose about 50 feet in the air and was proceeding nicely when the wings seemed to fold up.” It, too, was damaged when it crashed. 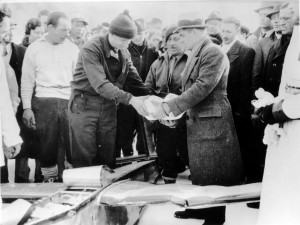 Success at last! The mail is delivered, sort of, after a short walk to retrieve the contents of the rocket from the icy surface of the lake.

The indefatigable Kessler tried to make the best of it. “I have derived a three-fold satisfaction,” he said, “from the apparent failure. The motor works perfectly, and tests have shown it can lift twice the load. The catapult, applied here for the first time to rockets, has shown it can give aid in giving such machines their first ‘push’. The fact that the plane landed flat showed it was perfectly designed and constructed…” According to one newspaper report, “His enthusiasm was not shared by the spectators.”

There were to be no more flights for the Glorias, but the story wasn’t finished yet. Kessler discovered that the reason for the motor failure on February 9 wasn’t the freezing of the fuel lines. The lines themselves had been bent at right angles, preventing fuel and oxydizer from reaching the motor. Another line had been cut and “dirt and grit” had been placed in the fuel tank. “It is astonishing,” Kessler said, “that no serious explosion occurred.” He blamed a disgruntled mechanic, who had waited until the night before the launch to sabotage the rocket. “The mechanic was jealous…he wanted to get all the credit for building the plane and when newspapers began to favor others, he decided to prevent the flight.”

All images in this article provided by Ron Miller/io9.com 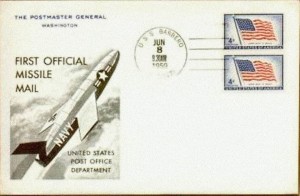 Frido Kessler’s plan wasn’t the only attempt at delivering mail at the front end of a rocket. Years later, the US Government decided to give it a try, this time with harebrained idea of loading mail into the nose of a submarine-launched nuclear cruise missile. Imagine firing those off for fast international delivery — it might work, as the saying goes, but there are a couple of reasons not to do it. Just a couple. Really.

Check it out — Missile Mail

Sometimes, truth is stranger than fiction.