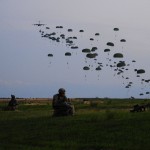 In June 2012, USNORTHCOM, one of the US Military’s key commands, held Exercise JOAX 2012-2, a joint airdrop operation to practice cohesiveness between US Army and USAF personnel. One of the programs involved an airdrop at night, with the famed 82nd Airborne jumping from C-17 Globemaster III aircraft of the 7th Airlift Squadron.
==> VIEW FEATURE STORY 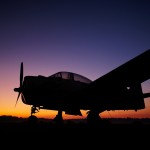 Skies of Light and Shadow

Featuring the extraordinary photos of Daniel Rychcik, a Polish-born amateur photographer who lives in Switzerland. A master with a camera, his work includes numerous Swiss aviation subjects, often photographed against the backdrops of the Alps.
==> VIEW FEATURE STORY 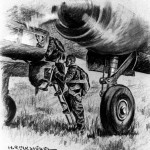 Art of the Luftwaffe

Nearly lost in the archives of the US Department of Defense, a series of works by Luftwaffe artists document German air power during World War II. The sketches are charcoal on paper, depicting scenes from front line squadron life, aircraft maintenance, and flight crews at rest.
==> VIEW FEATURE STORY